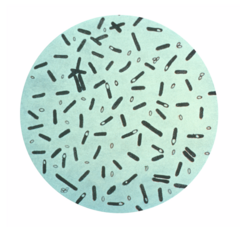 Clostridium botulinum, a bacteria that produces botulinum toxin, a neurotoxin protein that to humans is one of the most poisonous naturally-occurring substances in the world

A toxin is a chemical substance that is capable of causing injury, illness, or death to an organism (poison) and that is produced by living cells or another organism. The term sometimes is used in a broader sense to refer to any substance that is poisonous to an organism, but generally the usage is limited to poisons produced via some biological function in nature, such as the bacterial proteins that cause tetanus and botulism. While the term is especially applied to substances of bacterial origin, many diverse taxa produce toxins, including dinoflagellates, fungi, plants, and animals.

Toxins are nearly always proteins that are capable of causing harm on contact or absorption with body tissues by interacting with biological macromolecules such as enzymes or cellular receptors. Toxins vary greatly in their severity, ranging from usually minor and acute (as in a bee sting) to almost immediately deadly (as in botulinum toxin).

Biotoxins vary greatly in purpose and mechanism, and they can be highly complex (the venom of the cone snail contains dozens of small proteins, each targeting a specific nerve channel or receptor), or a single, relatively small protein.

Human creativity has resulted in understanding about toxins and their mechanisms, and this knowledge has been employed in making effective insecticides, to improve the quality of human life, and in making vaccines and antidotes (such as antivenom to snake toxins). On the other hand, human creativity also has used this knowledge to create nerve agents designed for biological warfare and biological terrorism. For example, in 2001, powdered preparations of Bacillus anthracis spores were delivered to targets in the United States through the mail (Lerner and Lerner 2004). Inhaling the weaponized spores can causes a form of quickly developing anthrax that is almost always fatal if not treated (Lerner and Lerner 2004). Ricin, a toxin produced from the castor bean, has long been used as a weapon of terrorism, and is one for which there is no vaccine or antidote (Lerner and Lerner 2004).

For example, a toxin may be used in assisting bacterial invasion of a host's cells or tissues or to combat the defense system of the host. A spider may use toxin to paralyze a larger prey, or a snake may use to subdue its prey. On the other hand, a honeybee sting, while of little benefit to the honeybee itself (which usually dies as a result of part of the abdomen ripping lose with the stinger), can help in discouraging predation on the bees or their hive products.

Sometimes, however, action of a toxin on an organism may not correlate to any direct benefit to the organism producing the toxin, but be accidental damage.

Numerous types of organisms produce toxins. Some well-known examples are listed below.

Bacterial toxins can damage the cell wall of the host (e.g., alpha toxin of Clostridium perfringens), stop the manufacture of protein in host cells or degrade the proteins (e.g., exotoxin A of Pseudomonas aeruginosa or the protein degrading toxins of Clostridium botulinum), or stimulate an immune response in the host that is so strong as to damage the host (e.g., three different toxins of Staphylococcus aureus resulting in toxic shock syndrome) (Lerner and Lerner 2004).

Bacterial toxins are classified as either exotoxins or endotoxins. An exotoxin is a soluble protein excreted by a microorganism, including bacteria, fungi, algae, and protozoa. An exotoxin can cause damage to the host by destroying cells or disrupting normal cellular metabolism. Endotoxins are potentially toxic natural compounds found inside pathogens such as bacteria. Classically, an endotoxin is a toxin that, unlike an exotoxin, is not secreted in soluble form, but is a structural component in bacteria that is released mainly when bacteria are lysed. Of course, exotoxins also may be released if the cell is lysed.

Exotoxins can be categorized by their mode of action on target cells.

The prototypical examples of endotoxin are lipopolysaccharide (LPS) or lipo-oligo-saccharide (LOS) found in the outer membrane of various gram-negative bacteria. The term LPS is often used interchangeably with endotoxin, owing to its historical discovery. In the 1800s, it became understood that bacteria could secrete toxins into their environment, which became broadly known as "exotoxin." The term endotoxin came from the discovery that portions of gram-negative bacteria themselves can cause toxicity, hence the name endotoxin. Studies of endotoxin over the next 50 years revealed that the effects of "endotoxin" was in fact due to lipopolysaccharide.

There are, however, endotoxins other than LPS. For example, delta endotoxin of Bacillus thuringiensis makes crystal-like inclusion bodies next to the endospore inside the bacteria. It is toxic to larvae of insects feeding on plants, but is harmless to humans (as we do not possess the enzymes and receptors necessary for its processing followed by toxicity).

The only known gram positive bacteria that produces endotoxin is Listeria monocytogenes.

Dinoflagellates can produce toxic substances of danger to humans. For instance, one should avoid consuming mussels along the west coast of the United States during the warmer months. This is because dinoflagellates create elevated levels of toxins in the water that do not harm the mussels, but if consumed by humans can bring on illness. Usually the United States government monitors the levels of toxins throughout the year at fishing sites.

Two species of mold—Aspergillus flavus and Aspergillus parasiticus—produce aflatoxin, which can contaminate potatoes afflicted by the mold (Lerner and Lerner 2004). This can lead to serious and even fatal illness.

Many plants produce toxins designed to protect against insects and other animal consumers, or fungi.

The roots of the tobacco plant produce a substance called nicotine, which is stored mainly in the leaves. Nicotine is a powerful poison and seems to benefit the plant by protecting it from insects, working by attacking the junctions between the insects' nerve cells (Stuart 2004). Tobacco leaves are sometimes soaked or boiled and the water sprayed on other plants as an organic insecticide. Nicotine is also a deadly poison to humans. Two to four drops (pure nicotine is an oily liquid) are a fatal dose for an adult. Smoking and chewing tobacco results in a much smaller dose; however, people have died as a result of mistaking wild tobacco for an edible herb and boiling and eating a large quantity (IPCS 2006).

Poison ivy, poison hemlock, and nightshade are other plants that produce toxins that work against humans.

Ricin is found in the castor bean plant, and is the third most deadly toxin to humans known, after the toxins produced by Clostridium botulinum and Clostridium tetani (Lerner and Lerner 2004). There is no known vaccine or antidote, and if exposed symptoms can appear within hours (nausea, muscle spasms, severe lung damage, and convulsion) and death from pulmonary failure within three days (Lerner and Lerner 2004).

Many animals use toxins for predation or defense. Well known examples include pit vipers, such as rattlesnakes, that possess hemotoxins that target and destroy red blood cells and are transmitted through the bloodstream; the brown recluse or "fiddle back" spider that uses necrotoxins that cause death in the cells they encounter and destroy all types of tissues; and the black widow spider, most scorpions, the box jellyfish, elapid snakes, and the cone snail that use neurotoxins that primarily affect the nervous system of animals.

The puffer fish produces the deadly toxin tetrodotoxin in its liver and ovaries; it blocks nerve conduction (Blakemore and Jennett 2001).

The term toxin comes from the Greek τοξικόν toxikon, meaning "(poison) for use on arrows." In the context of biology, poisons are substances that can cause damage, illness, or death to organisms, usually by chemical reaction or other activity on the molecular scale, when a sufficient quantity is absorbed by an organism.

Toxin is a subcategory of poison, referring to a substance produced by a living organism. However, when used non-technically, the term "toxin" is often applied to any poisonous substance. Many non-technical and lifestyle journalists also follow this usage to refer to toxic substances in general, though some specialist journalists maintain the distinction that toxins are only those produced by living organisms. In the context of alternative medicine the term toxin often is used nonspecifically as well to refer to any substance claimed to cause ill health, ranging anywhere from trace amounts of pesticides to common food items like refined sugar or additives like artificial sweeteners and MSG.

In pop psychology, the term toxin sometimes is used to describe things that have an adverse effect on psychological health, such as a "toxic relationship," "toxic work environment," or "toxic shame."

Venoms usually are defined as biologic toxins that are delivered subcutaneously, such as injected by a bite or sting, to cause their effect. In normal usage, a poisonous organism is one that is harmful to consume, but a venomous organism uses poison to defend itself while still alive. A single organism can be both venomous and poisonous.

The derivative forms "toxic" and "poisonous" are synonymous.

A weakened version of a toxin is called a toxoid (Lerner and Lerner 2004). Toxids have been treated chemically or by heat to limit their toxicity while still allowing them to stimulate the formation of antibodies.