The word tobacco may refer either to the various species of broad-leafed plants comprising the genus Nicotiana of the nightshade family, or to the dried leaves of these plants. The dried and cured leaves of tobacco plants are smoked and consumed in other ways as a source of the alkaloid drug nicotine, a powerful neurotoxin that is particularly harmful to insects.

More than 20 species of tobacco plants have been identified. Among these, the most important economically to humans is cultivated tobacco, Nicotiana tabacum.

Tobacco use has had a tremendous impact on history and society all over the world, especially in the last five hundred years. Today, its use is considered a health hazard and one of the leading causes of disease and death in the world. These problems reflect aspects of human and social responsibility. For consumers, any perceived benefit or short-term gratification carries with it the risk of long-term, serious repercussions. For those promoting tobacco consumption, even among youth, in order to gain monetary profit, the actions represent a lack of social responsibility and a deviation from the religious precept of living for the sake of others. 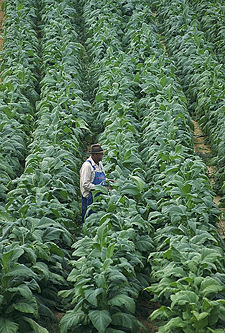 Tobacco is a member of the nightshade family, Solanaceae, along with potatoes (Solanum tuberosum), tomatoes (Solanum lycopersicum), mandrakes (Mandragora officinarum), and deadly nightshade (Atropa belladonna). There are about 67 species in the Nicotiana genus, located in America (largely in Andean South America and Mexico), Australia, South Pacific Islands, and one in Namibia (Hyde and Wursten 2008).

The tobacco plant is an annual (or sometimes perennial) herb growing about 1-2 meters (3-7 feet) tall. Nicotiana tabacum has about 20 large leaves, each one about 60-75 cm (24-30 inches) long and 38-46 cm (15-18 inches) wide. Tobacco plants flower in summer producing white, purple, pink, or red flowers which are most often pollinated by moths. One plant can produce up to a million seeds. Tobacco plants require warm climate and high humidity to grow well. They can grow on poor soil, but do not do well if there is too much nitrogen in the soil (IPCS 2006).

The roots of the tobacco plant produce a substance called nicotine, which is stored mainly in the leaves. Nicotine is a powerful poison and seems to benefit the plant by protecting it from insects, working by attacking the junctions between the insects' nerve cells (Stuart 2004). Tobacco leaves are sometimes soaked or boiled and the water sprayed on other plants as an organic insecticide. Nicotine is also a deadly poison to humans. Two to four drops (pure nicotine is an oily liquid) are a fatal dose for an adult. Smoking and chewing tobacco results in a much smaller dose; however, people have died as a result of mistaking wild tobacco for an edible herb and boiling and eating a large quantity (IPCS 2006).

While nicotine is prominent in tobacco plants, it is also found in lower quantities in tomato, potato, eggplant (aubergine), green pepper, and the coca plant.

Tobacco was first used by Native Americans and began to be cultivated about eight thousand years ago in South America. Nicotiana tobacum is not found wild and may be a hybrid of other species. Its use and cultivation spread throughout most of South and North America.

One of the most important early uses of tobacco was as a hallucinogen in shamanistic rituals (Borio 2006). It was also used for medical reasons; including the treatment of rheumatic swelling, skin diseases, and scorpion stings (PFF 2006). After a time, the smoking of dried tobacco leaves in clay pipes or rolled as cigars became common in some Native American societies. Several tobacco species were used including "Aztec tobacco" (Nicotiana rustica).

Tobacco leaves were given to Christopher Columbus by the people of the West Indies in 1492. However, he did not understand their purpose. It is said that Rodrigo de Jerez, one of Columbus's crew, was the first European to smoke tobacco. Ramon Pane, a Catholic monk who came on Columbus's second voyage to the New World in 1493, wrote an account of tobacco use and is credited with introducing it to Europe. Over the next one hundred years, tobacco cultivation and use spread around the world; mainly by Spanish, Portuguese, and English sailors (Borio 2006).

Dried tobacco leaves were smoked in pipes or chewed. In the 1600s snuff, powered tobacco which was inhaled, became popular among the upper classes. In the 1800s and 1900s, cigars (leaves rolled inside other leaves) and cigarettes (leaves rolled in paper), became the most popular ways to use tobacco.

The cultivation of tobacco is labor intensive. The seeds are sown in a seedbed and after sprouting are transplanted to the field where they will grow. After a while the side shoots and flowers are cut off to encourage more growth of the leaves. When the leaves are ready to be harvested the plant is cut down or the individual leaves cut off the plant by hand. Then they are taken to barns where they are hung up to dry, either by air or with the help of fire. After that, they are baled for shipment to market.

Starting in the mid 1600s, the English colonies in North America became one of the world's most important tobacco growing regions. The high value of tobacco and the amount of labor required to grow it were important factors which led to the establishment of slavery in the colonies. Conflicts over the taxation and regulation of the trade of tobacco were sources of conflict between the colonies and England, which contributed to the onset of the American Revolution in 1776 (Borio 2006).

As the use of tobacco grew, some people became concerned about its possible ill effects on the health of its users. One of the first was King James I of England. In 1604 he wrote "A Counterblaste to Tobacco" in which he asked his subjects:

Have you not reason then to bee ashamed, and to forbeare this filthie noveltie, so basely grounded, so foolishly received and so grossely mistaken in the right use thereof? In your abuse thereof sinning against God, harming your selves both in persons and goods, and raking also thereby the markes and notes of vanitie upon you: by the custome thereof making your selves to be wondered at by all forraine civil Nations, and by all strangers that come among you, to be scorned and contemned. A custome lothsome to the eye, hatefull to the Nose, harmefull to the braine, dangerous to the Lungs, and in the blacke stinking fume thereof, neerest resembling the horrible Stigian smoke of the pit that is bottomelesse. (James 1604)

In 1761 English doctor John Hill published "Cautions against the Immoderate Use of Snuff" in which he warned snuff users that they were vulnerable to cancers of the nose. In 1795, American Samuel Thomas von Soemmering reported on cancers of the lip in pipe smokers. In 1912, American Dr. Isaac Adler was the first to strongly suggest that lung cancer is related to smoking. In 1929 Fritz Lickint of Dresden, Germany published the first formal statistical evidence of a lung cancer–tobacco link, based on a study showing that lung cancer sufferers were likely to be smokers. Lickint also argued that tobacco use was the best way to explain the fact that lung cancer struck men four or five times more often than women (since women smoked much less) (Borio 2006). 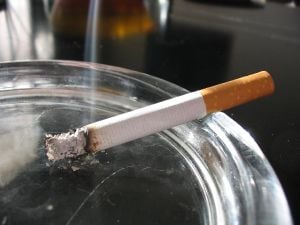 The cigarette is now the most common form of tobacco use

In 1964 Luther L. Terry, M.D., Surgeon General of the United States Public Health Service, released the report of the Surgeon General's Advisory Committee on Smoking and Health. It was based on over seven thousand scientific articles that linked tobacco use with cancer and other diseases. This report led to laws requiring warning labels on tobacco products and to restrictions on tobacco advertisements. From this time, Americans became much more aware of the dangers of tobacco and its use in the United States began to decline. By 2004, nearly half of all Americans who had ever smoked had quit (CDC 2004).

Tobacco use has also been shown to be associated with cancers of the mouth, pharynx, larynx, esophagus, stomach, pancreas, cervix, kidney, ureter, and bladder; as well as tied to leukemia, cataracts, pneumonia, chronic bronchitis, emphysema, stroke, heart attack, vascular disease, and aneurysm. It is estimated that around 440,000 Americans die of tobacco related diseases each year. Significantly shorter life expectancies have been associated with tobacco smoking. It is very difficult for many people to quit tobacco use because of the addictive nature of nicotine itself (NIDA 2006).

A lethal dose of nicotine is contained in as little as one half of a cigar or three cigarettes; however, only a fraction of the nicotine contained in these products is actually released into the smoke, and most clinically significant cases of nicotine poisoning are the result of concentrated forms of the compound used as insecticides. Other active alkaloids in tobacco include harmala alkaloids.

The substantially increased risk of developing cancer as a result of tobacco usage seems to be due to the plethora of nitrosamines and other carcinogenic compounds found in tobacco and its residue as a result of anaerobic heating, either due to smoking or to flue-curing or fire-curing. The use of flue-cured or fire-cured smokeless tobacco in lieu of smoked tobacco reduces the risk of respiratory cancers but still carries significant risk of oral cancer. In contrast, use of steam-cured chewing tobacco (snus), avoids the carcinogenicity by not generating nitrosamines, but the negative effects of the nicotine on the cardiovascular system and pancreas are not ameliorated.

Tobacco is the largest non-food crop by monetary value in the world today. Although its use in the United States is lessening, worldwide use is expanding partly due to expanding population and partly to expanding income in many nations. China is both the largest grower (producing 2.51 million metric tons in 2005) and the largest consumer of tobacco today. [[[Brazil]] (0.88 million metric tons in 2005), [India]] (0.60), and the United States (0.29) are the next three largest growers. There are many other tobacco growing nations and it is consumed in every nation. European nations are the largest importers of tobacco. In 2003, the Food and Agriculture Organization of the United Nations predicted that tobacco use would continue to expand at least through 2010 (FAO 2003).

Governments around the world, and the United Nations and other organizations, are trying to discourage the use of tobacco because of its ill effects on the health and prosperity of people and communities. Tobacco advocates, such as those working in the tobacco industry, point out the benefits of tobacco growing to small farmers and urge governments not to take drastic action to curb its production (ITGA 2006).