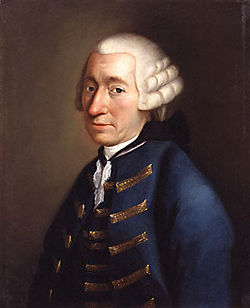 Tobias George Smollett (March 16, 1721 – September 17, 1771) was a Scottish author, poet, and novelist, best known for his picaresque novels, such as Roderick Random and Peregrine Pickle that generally followed the comedic misadventures of well-meaning but unscrupulous vagabonds through the underbelly of English social life. Smollett wrote during the golden age of the English novel, a time during the eighteenth century when English-language authors were, indisputably, producing more fiction than anywhere else in Europe, developing and refining the novelistic form at a remarkable pace. Smollett was a contemporary of the twin titans of the English novel, Henry Fielding and Samuel Richardson, and although he had much more in common with Fielding than any other author of his period due to their shared genius for comedy, Smollett was markedly different in his humor. While Fielding and most other comic writers of eighteenth-century England favored outlandish satire, Smollett's comedy is a little more low-key. Inspired by the classically-modeled comedies of Ben Jonson, Smollett's novels are more realistic and less outrageous than that of most of the other authors of his period. Smollett preferred to have the comic quirks of his characters be shown rather than told, with the humor emerging from the external actions of his characters. Although always less popular than either Fielding or Richardson, Smollett nonetheless attracted a loyal and dedicated following. His realistic style and his wry sense of humor was a major influence on Charles Dickens, and within his own lifetime Smollett became a close confidante of Samuel Johnson and Oliver Goldsmith. He remains one of the best examples of classic, eighteenth century English prose, and although his works may seem antiquated to the present-day reader, he is nonetheless one of the literary pinnacles of his generation.

Smollett was born at Dalquhurn, now part of Renton, in present-day West Dunbartonshire, Scotland. He was the son of a judge and land-owner, and was educated at the University of Glasgow, qualifying as a surgeon. His career in medicine came second to his literary ambitions, and in 1739 he went to London to seek his fortune as a dramatist, taking with him his spectacularly bad play The Regicide. Although unsuccessful, he obtained a commission as a naval surgeon on the HMS Chichester, traveling to Jamaica, where he settled down for several years and married a wealthy Jamaican heiress. On his return, he set up practice in Downing Street.

His first published work was a poem about the Battle of Culloden entitled "The Tears of Scotland" which was rather popular and proved to be Smollett's only successful excursion into poetry. However, it was The Adventures of Roderick Random which made his name. Published in 1748, it was modeled on Alain-René Le Sage's Gil Blas. Smollett followed it up by finally getting his tragedy, The Regicide, published, though it was never performed. In 1750, Smollett took his MD degree in Aberdeen, and also traveled to France, where he obtained material for his second novel, The Adventures of Peregrine Pickle, another big success. Having lived for a short time in Bath, he returned to London and published The Adventures of Ferdinand Count Fathom in 1753. He was now recognized as a leading literary figure, and associated with the likes of David Garrick, Oliver Goldsmith, Samuel Johnson and Laurence Sterne. In 1755 he published a translation of Miguel de Cervantes's Don Quixote, which he revised in 1761. In 1756, he became editor of The Literary Review.

Smollett then began what he regarded as his major work, A Complete History of England, on which he worked diligently from 1757 to 1765. During this period he served a short prison sentence for libel, and produced another novel, The Life and Adventures of Sir Launcelot Greaves (1760). Having suffered the loss of his only child in 1766, he severed all connections with the literary community and went abroad with his wife, the result of which was a travelogue, Travels through France and Italy, which remains a rather popular work of eighteenth-century non-fiction. Smollett also wrote The History and Adventures of an Atom (1769), in which he presented his view of English politics during the Seven Years' War under the guise of a tale from ancient Japan.

He also visited Scotland, and this visit helped inspire his last novel, The Expedition of Humphry Clinker (1771), published in the year of his death. He had for some time been ailing from an intestinal disorder, and had sought a cure at Bath, eventually retiring to Italy, where he is buried at Livorno.

Roderick Random was Smollet's first novel, which set the tone for his subsequent, satirical and comedic works. Often lacking in cohesive narrative structure, his novels make up for it by the sheer humorousness of the characterizations. Roderick Random is not only notable for Smollett's sense of irony and comedy, but also for its extended sequences on life at sea. Smollett, who had first-hand experience as a seaman thanks to his excursions to the Caribbean, is one of the first talented novelists to write convincingly and realistically of naval experience. The novel has thus become, unusually, a resource not only for scholars of literature but also for scholars of English naval history, and some have quipped that if Dickens was the great novelist of London, Smollett most certainly was England's first great novelist of the sea.

The novel tells the life story, in first-person, of Roderick "Rory" Random, who was born to a nobleman and a lower-class woman and is thus shunned by his father's family. His mother dies soon after his birth and his father is driven mad with grief. After a few years of resentfully paying for Roderick's education, his grandfather finally casts him out after repeated negative reports from Roderick's abusive tutor. Roderick ends up finding his maternal uncle, Tom Bowling, a sailor who attempts to support Roderick as best as he can between voyages.

Roderick's companion through most of the story is Hugh Strap, a simple-hearted barber's apprentice and former schoolmate of Roderick. The two end up serving twice on British ships, once on a privateer and once on a warship. Roderick spends much of the novel trying to marry a wealthy woman so that he can live comfortably, and to that end he poses as a nobleman several times, including once while he is in France. Roderick's unattainable love interest is Narcissa, whose squire brother refuses to consent to a match and ends up holding Narcissa as a near-prisoner to keep her from marrying Random, only to be comedically undone in the end, so that Random can, after a long series of adventures, retire to his happily ever after.

The Adventures of Peregrine Pickle

The Adventures of Peregrine Pickle is a picaresque novel, one of Smollett's greatest early successes, first published in 1751, and revised and reissued in 1758. It is the story of the fortunes and misfortunes of the egotistical dandy Peregrine Pickle, providing a comic and caustic portrayal of eighteenth-century European society. In particular it lampoons the traditional "Grand Tour," whereby Englishmen were meant to acquire civilization by traveling throughout the European continent. In Smollett's version, Peregrine's grand tour ends up with him getting himself, quite literally, in a pickle.

At the beginning of the novel Peregrine is a young country gentleman, rejected by his cruel mother, ignored by his indifferent father, hated by his degenerate brother, and raised by Commodore Trunnion, who is greatly attached to the boy. Peregrine's upbringing, education at Oxford, journey to France, his debauchery, bankruptcy, jailing, unexpected succession to the fortune of his father, and his final repentance and marriage to his beloved Emilia all provide scope for Smollett's satire on human cruelty, stupidity, and greed. The novel is somewhat unusual by today's standards. Rather than a continuous narrative, it is written as a series of adventures, with every chapter typically describing a new adventure. The adventures are not necessarily chronologically linked. Although the same characters and themes resurface throughout and there is a definite plot arcing throughout the text, the adventures function independently of one another. The style of the novel, typical of eighteenth-century English fiction, reads almost like a collection of related short stories rather than a cohesive narrative, and there is also a very long and completely tangential story, "The Memoirs of a Lady of Quality," inside the main storyline.

Retrieved from https://www.newworldencyclopedia.org/p/index.php?title=Tobias_Smollett&oldid=1033729
Categories:
Hidden category:
This page was last edited on 13 March 2020, at 23:30.
Content is available under Creative Commons Attribution/Share-Alike License; additional terms may apply. See Terms of Use for details.