In botany, a herb or herbaceous plant (pronounced with or without the h) technically is a seed-bearing plant (most specifically a flowering plant) that does not produce a woody stem with persistent tissue but generally dies down to the ground level each year.

In a more popular sense, the term herb is applied to any useful plant that is employed for medicinal purposes, or for culinary purposes in small quantities related to flavor (such as a condiment or seasoning), or even for spiritual uses. Likewise, the term refers to the substance obtained from the plant and used in that manner.

In this non-botanical sense, the term generally is used regardless of whether the source of the herb is a woody plant or a herbaceous plant. For example, rosemary (Rosmarinus officinalis) is used in traditional Mediterranean cuisine and medicinally as a "herb" despite the fact that it is a woody, perennial plant. However, some limit the term herb, even in the second sense, to herbaceous plants, particularly as related to culinary use (Spicer and VanDyk 2003; Herbert 2006).

In both senses of the term, herbs have added immeasurably to the quality of human life. Humans have a relationship with a vast array of herbaceous plants that offer important ecological, nutritional, economic, and aesthetic values, such as barley, wheat, rice, and other grasses being a main food source and pink carnations serving as a herbaceous ornamental plant. Herbs have provided medicinal and culinary benefits that have enhanced the quality of human life, such as the oregano used in tomato sauces or lemon balm used medicinally as a herbal tea. 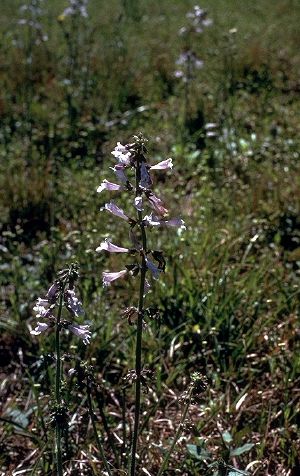 Herbaceous perennial plants have stems that die at the end of the growing season, but new growth forms from the roots or from underground stems or from crown tissue at the surface of the ground. Examples include bulbs, Peonies, Hosta, and grasses. By contrast, non-herbaceous perennial plants are woody plants that have little stems above ground that remain alive during winter and grow shoots the next year from the above ground parts, including trees, shrubs, and vines.

Herbaceous plants are pioneers, or early-successional species. These species are relatively fast growing plants,and have a wide distribution of seeds and stems. 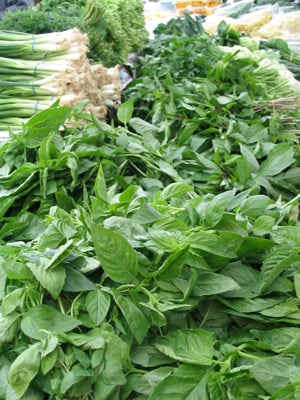 The term herb also is employed popularly in a very different sense related to their usefulness for culinary, medicinal, or spiritual usage. Culinary herbs are distinguished from vegetables in that herbs are used in small amounts and provide flavor (similar to spices) rather than substance to food. In this sense, some herbs contain phytochemicals that, when consumed in small quantities, can be healthy, yet in large quantities can be toxic to the liver. Some types of herbal extract, such as the extract of Hypericum perforatum (St. John's wort), or the Piper methysticum (kava plant) can be used for medical purposes to relieve depression and stress. However, administering high amounts of these herbs may lead to poisoning, and should be used with caution.

The green, leafy part of the plant is often used, but herbal medicine makes use of the roots, flowers, seeds, root bark, inner bark (cambium), berries, and sometimes the pericarp or other portions.

The terms spice and herb are often used interchangeably. However, some make a distinction based on what part of the plant is the source, as well as the type of plant. Herbert (2006), and Spicer and VanDyk (2003), for example, consider herbs to come from the leafy part of a herbaceous plant, while spices are obtained from the seeds, berries, bark, root, fruit, or other parts of the plant (even leaves in some cases). For example, cilantro is a herb because it comes from the leaves of Coriandrum sativum while coriander is a spice because it comes from the seeds of the same plant (Spicer and VanDyk 2003). However, this may be more a distinction in terms of the culinary use of the terms, since "herbal medicine" utilizes many sources of plant matter.

Pronunciation of "h" in herb 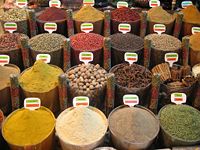 A spice market in Istanbul

This is a list of culinary "herbs and spices." Specifically, these are unrefined and unmixed food or drink additives of botanical origin, used in nutritionally insignificant quantities for flavoring. As such, this list does contain pepper, but not salt (which is a mineral), or curry powder (which is a mixture). It also does not contain herbs or spices that are purely medicinal (such as valerian), fictional (such as aglaophotis), or are used as recreational drugs (such as marijuana).