Watercress is among the oldest known leaf vegetables consumed by human beings. These two species are botanically related to garden cress and mustard—all noteworthy for a peppery, tangy flavor. Added to salads, soups, or sandwiches, or used as a garnish, watercress provides a nutritious addition to food, while its pungent, peppery flavor adds to the culinary experience.

The two species of watercress belong to the flowering plant family Brassicaceae (or Cruciferae), also known as the crucifers, the mustard family, or the cabbage family. (Cruciferae is an older name for the family. It means "cross-bearing," because the four petals of their flowers are reminiscent of a cross.)

The family contains species of great economic importance, providing much of the world's winter vegetable supply. In addition to watercress, members of the Brassicaceae family include cabbage, broccoli, cauliflower, brussels sprouts, collards, and kale (all cultivars of one species, Brassica oleracea), Chinese kale, rutabaga (also known as Swedish turnips or swedes), seakale, turnip, radish, and kohl rabi. Other well known members of the Brassicaceae include rapeseed (canola and others), mustard, horseradish, and wasabi.

Brassicaceae consists only of herbaceous plants with annual, biennial, or perennial lifespans. The leaves are alternate (rarely opposite), sometimes organized in basal rosettes. They are very often pinnately incised and do not have stipules.

The structure of the flowers is extremely uniform throughout the family. They have four free saccate sepals and four clawed free petals, staggered. They can be disymmetric or slightly zygomorphic, with a typical cross-like arrangement. They have six stamens, four of which are longer (as long as the petals, so relatively short in fact) and are arranged in a cross like the petals and the other two are shorter (tetradynamous flower). The pistil is made up of two fused carpels and the style is very short, with two lobes (Superior ovary). The flowers form ebracteate racemose inflorescences, often apically corymb-like.

Pollination occurs by entomogamy; Nectar is produced at the base of the stamens and stored on the sepals.

Brassicaceae fruit is a peculiar kind of capsule named siliqua (plural siliquae, American English silique/siliques). It opens by two valves, which are the modified carpels, leaving the seeds attached to a framework made up of the placenta and tissue from the junction between the valves (replum). There is often an indehiscent beak at the top of the style and one or more seeds may be borne there. Where a siliqua is less than three times as long as it is broad, it is usually termed a silicula. The siliqua may break apart at constrictions occurring between the segments of the seeds, thus forming a sort of loment (for example, Raphanus); it may eject the seeds explosively (for example, Cardamine); or may be evolved in a sort of samara (for example, Isatis). Unsurprisingly the fruit is often the most important diagnostic character for plants in this family.

Nasturtium officinale and N. microphyllum are fast-growing perennial plants native from Europe to central Asia. The hollow stems of watercress are floating and the leaves are pinnately compound. Watercresses produce small white and green flowers in clusters.

Nasturtium nasturtium-aquaticum (nomenclaturally invalid) and Sisymbrium nasturtium-aquaticum L. are synonyms of N. officinale. Nasturtium officinale var microphyllum (Boenn. ex Reich.) Thellung is a synonym of N. microphyllum (ITIS, 2004). These species are also listed in some sources as belonging to the genus, Rorippa, although molecular evidence shows that the aquatic species with hollow stems are more closely related to Cardamine than Rorippa (Al-Shehbaz and Price, 1998). Watercresses are not related to the flowers in the genus, Tropaeolum (family Tropaeolaceae), popularly known as "nasturtiums." 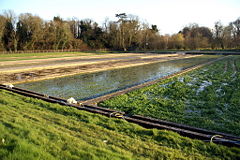 Cultivation of watercress is practical on both a large scale and a garden scale.

Being semi-aquatic, watercress is well-suited to hydroponic cultivation, thriving best in water that is slightly alkaline. It is frequently produced around the headwaters of chalk streams. In many local markets, the demand for hydroponically-grown watercress exceed supplies. This is due in part to the fact that cress leaves are unsuitable for distribution in dried form and can only be stored for a short period.

However (in the United Kingdom at least), the use by supermarkets of sealed plastic bags under some internal pressure (a plastic envelope containing moisture and pressurized (inflated) to prevent crushing of contents) has allowed the distribution of watercress (and sometimes a mixture of it with other salad leaves). This has allowed national availability with a once purchased storage life of one to two days in chilled/refrigerated storage.

If unharvested, watercress can grow to a height of 50-120 centimeters. Also sold as sprouts, the edible shoots are harvested days after germination.

As with many plants in this family, the foliage of watercress becomes bitter when the plants begin producing flowers.

Watercress has a pungent, slightly bitter taste, with a peppery snap (Herbst 2001). It is popular in salads and as a garnish, and may be used in soups, salads, and diverse cooked dishes (Herbst 2001). Watercress is one of the main ingredients in V8 Vegetable Juice.

Many benefits from eating watercress are claimed, such as that it acts as a mild stimulant, a source of phytochemicals and antioxidants, a diuretic, an expectorant, and a digestive aid. It also appears to have cancer-suppressing properties (LSE 2007). It is widely believed to help defend against lung cancer (Hecht et al. 1995; Aisen and Cavender 2005; Bhat 2007).

In some regions, watercress is regarded as a weed (USDA 2008), in other regions as an aquatic vegetable or herb. Watercress crops grown in the presence of animal waste, such as near a cattle or sheep growing area, can be a haven for parasites such as the liver fluke Fasciola hepatica, which causes fasciolosis.