Brussels sprout (plural Brussels sprouts), also known as brussels sprout (without the capital B) and brussel sprout, is the common name for a cultivar group, Brassica oleracea Gemmifera Group, of the wild cabbage (B. oleracea) of the mustard family Brassicaceae (or Cruciferae). Also known as Brassica oleracea var gemmifera, this plant is a cool season biennial, with simple, alternate leaves, flowers borne in terminal racemes, and axillary buds that develop along the stem into small, cabbage-like heads (Mills 2001). The term Brussels sprouts also is used for these edible, leafy, green buds, which are popular food items.

Breeding work, primarily spearheaded in Europe, has resulted in diverse cultivars of Brussels sprouts, selected for such qualities as uniformity of sprout growth, vigor, sprout size, and disease resistance (Mills 2001). In addition to offering a unique flavor, Brussels sprouts offer a good source of nutrition. 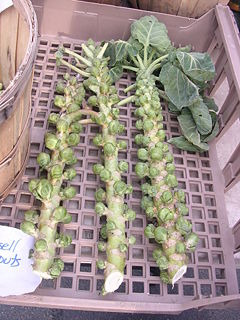 Brassica olearacea var. gemmifera is a cool season biennial, with axillary buds produced in the leaf axils during the first year of growth and a seed head produced in the second year of growth (Mills 2001). The stems are light grayish green in color, with the axillary buds produced beneath the leaves in the nodes of the elongated stem. The roots are shallow, with eighty percent of the roots growing in the upper eight to twelve inches of soil (Mills 2001). The simple, alternate leaves are round to heart-shaped with long petioles; they are light green to deep grayish-green in color (Mills 2001).

The sprouts are modified leaves forming a cabbage-like "head" (Mills 2001). Many rows of sprouts are produced on a single long stem (Herbst 2001). These leafy green buds resemble miniature cabbages, with forms popular for food ranging from 1/2 inch in diameter to 2 inches in diameter.

Two main cultivated types of brussels sprouts are a tall variety, which stands 2 to 4 feet tall, and a short variety, which grows to a maximum of 2 feet (Mills 2001). 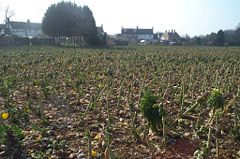 A field of Brussels sprouts after harvest

Brussels sprouts grow in temperature ranges of 7 to 24°C (45 to 75°F), with highest yields at 15 to 18°C (60 to 65°F) (Mills 2001). In commercial productions, plants grow from seeds in seed beds or greenhouses, and are transplanted to growing fields (Mills 2001). Fields are ready for harvest 90-180 days after planting (Pfyffer 2004). The edible sprouts grow like buds in a spiral array on the side of long thick stalks of approximately 2 to 4 feet in height, maturing over several weeks from the lower to the upper part of the stalk. Sprouts may be picked by hand into baskets, in which case several harvests are made of 5 to 15 sprouts at a time, by cutting the entire stalk at once for processing, or by mechanical harvester, depending on variety (Pfyffer 2004). Each stalk can produce 1.1 to 1.4 kilograms (2 1/2 to 3 pounds), although the commercial yield is approximately 0.9 kilograms (2 pounds) per stalk (Mills 2001).

Much of the United States' production is in California, with a smaller percentage of the crop grown in Skagit Valley, Washington, where cool springs, mild summers, and rich soil abounds and to a lesser degree on Long Island, New York (USDA 1999). Currently, there are several thousand acres planted in coastal areas of San Mateo, Santa Cruz, and Monterey counties of California, which offer an ideal combination of coastal fog and cool temperatures year-round.

About 80 to 85 percent of U.S. production is for the frozen food market, with the remainder for fresh consumption (USDA 1999). 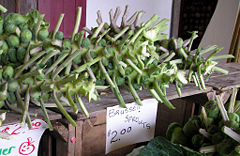 Brussels sprouts on the stalk

Once harvested, sprouts last 3 to 5 weeks under ideal near-freezing conditions before wilting and discoloring, and about half as long at refrigerator temperature (Mills 2001).

The usual method of preparing a brussels sprout for cooking is first to cut off the base together with any remaining stem, and then to peel away and discard the surface leaves that are loosened by this cut. When boiling or steaming, some cooks will cut a cross in the stem to aid the penetration of heat to the center of the sprout. In 2007, Ireland's Food Minister Trevor Sargent described his preferred method of cooking of brussels sprouts: Placing the sprouts in a single layer in a saucepan, covering them in just enough water to cover the stalks and boiling with salt and butter until the water is absorbed (IDAFF 2007). Microwaving, stir frying, roasting, and steaming are also options.

Overcooking releases sulfur compounds in the vegetables that give it a distinctive smell commonly found unpleasant. If correctly cooked, the unpleasant smell is avoided and the vegetable possesses a delicate nutty flavor.

In the UK, brussels sprouts are a traditional winter vegetable, and are often eaten boiled with a roast dinner, particularly at Christmas. They can also be stir-fried, roasted, or made into soup.

Retrieved from https://www.newworldencyclopedia.org/p/index.php?title=Brussels_sprout&oldid=1095111
Categories:
Hidden category:
This page was last edited on 12 January 2023, at 02:08.
Content is available under Creative Commons Attribution/Share-Alike License; additional terms may apply. See Terms of Use for details.