Cabbage is any of the various plants of the Capitata Group of the species Brassica oleracea of the mustard family Brassicaceae (or Cruciferae), as well as the leafy head of these plants, which are popular food items. More generally, the term cabbage also has been used to include diverse horticultural forms developed from the wild cabbage, Brassica oleracea, which belong to this same species, but are placed in distinct groups, such as kale (Acephala Group), cauliflower (Botrytis Group), brussels sprout (Gemmifera Group), and broccoli (Italica Group). These diverse forms of food plants were a product of human creativity, through artificial selection over the years.

The focus of this article will be "true cabbages" (Brassica oleracea, var. capitata).

Wild B. olearacea is a tall biennial plant, forming a stout rosette of large leaves in the first year. The leaves are fleshier and thicker than those of other species of Brassica, adaptations to store water and nutrients in its difficult growing environment. In its second year, the stored nutrients are used to produce a flower spike 1–2 m tall bearing numerous yellow flowers.

Wild cabbage has been bred into a wide range of cultivars, including cabbage, broccoli, cauliflower, and more, some of which are hardly recognizable as being members of the same species. It is one of the most important human food crop plants. The cultivars of B. oleracea are grouped by developmental form into seven major cultivar groups, of which the Acephala Group remains most like the natural Wild Cabbage in appearance:

The original Brassica oleracea ancestor is native to the Mediterranean region of Europe. Although wild B. oleracea is believed to have been cultivated for several thousand years, its history as a domesticated plant is not certain before Greek and Roman times, when is known to be a well-established garden vegetable. (There is some evidence of cabbage use in the Shensi province in China dating back to 4,000 B.C.E.)

Theophrastus (c. 370— 285 B.C.E.) mentions three kinds of this species: a curly-leaved, a smooth-leaved, and a wild-type (Zohary and Hopf 2000). Both Cato ((234 B.C.E. – 149 B.C.E.) andPliny ((23 – 79 C.E.) extolled the virtues of cabbage. Cato believed it should be eaten raw with vinegar, a precursor to cole slaw. Pliny, in his work, Natural History, mentions cabbage under the classification "Materia Medica," focusing on its medicinal qualities when taken internally and when used as a poultice.

Soon after the first domestication of plants, ancestral "cabbage" was being grown as a leafy vegetable around the Mediterranean. Because the leaves were the part of the plant consumed, those plants with the largest leaves were selectively propagated for next year's crop.

It is believed that the continued preference for ever-larger leaves led to the vegetable we now know as kale (known botanically as Brassica oleracea, var. acephala ("headless cabbage.") Kale is, of course, still grown today. But eventually some developed a taste for those plants with a tight cluster of tender young leaves in the center of the plant, at the top of the stem, and that type, too, came to be selected. Over the centuries, that selecting led to what we think of as cabbages, which were probably a distinct type by as early as the first century C.E. Cabbage is Brassica oleracea, var. capitata, "headed cabbage.") 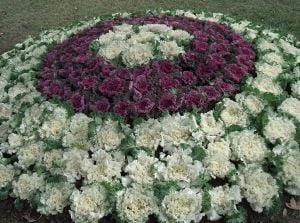 Broadly speaking, cabbage varieties come in two groups, early and late. The early varieties mature in about 50 days. They produce small heads that do not keep well and are intended for consumption while fresh. The late cabbage matures in about 80 days, and produces a larger head.

For high production, the crop requires a cool, humid climate. The length of the total growing period varies between 90 (spring-sown) and 200 (autumn-sown) days, depending on climate, variety, and planting date, but for good production the growing period is about 120 to 140 days. Most varieties can withstand a short period of frost of -6°C, some down to -l0°C. Long periods (30 to 60 days) of -5°C are harmful. The plants with leaves smaller than 3 cm will survive long periods of low temperature; however, when the leaves are 5 to 7 cm, the plant will initiate a seed stalk and this leads to a poor quality yield. Optimum growth occurs at a mean daily temperature of about 17°C with daily mean maximum of 24°C and minimum of 10°C. Mean relative humidity should be in the range of 60 to 90 percent.

Generally, the heavier loam soils are more suited to cabbage production. Under high rainfall conditions, sandy or sandy loam soils are preferable because of improved drainage. The fertilizer requirements are high. Cabbage is moderately sensitive to soil salinity.

Row spacing is dependent on the size of heads required for markets, or between 0.3 and 0.5 m for heads of 1 to 1.5 kg each and 0.5 and 0.9 m for heads up to 3 kg each. An optimum production can be reached with a plant density in the range of 30,000 to 40,000 plants/ha. Planting can be by direct seeding with a seed rate of 3 kg/ha, or by transplanting from open field beds and from cold frames which are used to protect the crop from cold during germination and early plant development.

Cabbage is characterized by slow development during the first half of the growing period, which may be 50 days for early maturing and up to 100 for autumn-sown, late maturing varieties. During the following periods—yield formation and ripening periods—the plant doubles its weight approximately every 9 days over a total period of 50 days. In the beginning of the yield formation period, head formation starts, followed by a sudden decrease in the rate of leaf-unfolding. Eventually, leaf unfolding ceases completely, while leaf initiation continues. This results in the formation of a restrictive skin by the oldest folded leaves within which younger leaves continue to grow until the firm, mature head is produced during the ripening period of 10 to 20 days.

Depending on variety, the head can be pointed or round, green or red, smooth or crinkled. Crop rotation of at least three years is recommended to combat soil-borne diseases (FAO 2007).

In home production, cabbage can be started indoors or sowed directly. Cabbage can be grown in a variety of climates and is frost tolerant, but the heads crack in excessive heat. Like all brassicae, early and late plantings do better than those maturing in the heat of the summer.

Cabbages keep well and were thus a common winter vegetable before refrigeration and long-distance shipping of produce.

While there are many different varieties of cabbage, the most common are:

A few of the most common diseases that affect cabbage are listed below (Doubrava et al. 2004).

The only part of the plant that is normally eaten is the leafy head; more precisely, the spherical cluster of immature leaves, excluding the partially unfolded outer leaves. The so-called 'cabbage head' is widely consumed—raw, cooked, or preserved—in a great variety of dishes, and is thus a leaf vegetable.

While raw cabbage can be eaten in hand, for most uses it is sliced into thin strips or shredded and used in salads, or chopped as in coleslaw.

Cabbage is often prepared by boiling, usually as part of soups or stews, such as the Central European and Eastern European borscht. Boiling tenderizes the leaves, releases sugars, and develops a characteristic "cabbage" aroma. Boiled cabbage seems to have fallen out of favor in North America, possibly due to the strong smell released during the cooking, or to its reputation for promoting flatulence. Boiled cabbage as an accompaniment to meats and other dishes can be an opportune source of umami, sugars, and dietary fiber.

Cabbage is favored for pickling and is considered ts'ai, or suitable to go over rice. The pickled cabbage known as kim-chi or kim-chee is a staple throughout Korea.

Cabbage is often consumed as the German sauerkraut. Finely sliced cabbage is mixed with salt and undergoes lactic acid fermentation. Sauerkraut was historically prepared at home, as a way of storing food for the winter; but like other canned and pickled foods is nowadays mainly an industrialized product.

Cabbage is fairly low in calories, a good source of many minerals (particularly potassium, and relatively high in vitamins A and C, but is also low in protein content (Bewick 1994). Green cultivars tend to be higher in vitamin A than red cabbage cultivars, while savoy types tend toward more vitamin A than smooth types (Bewick 1994).

Cabbage is known to have been used in European folk medicine to treat acute inflammation (Woodman 2003). A paste of raw cabbage may be placed in a cabbage leaf and wrapped around the affected area to reduce discomfort. It may also be effective in the relief of painfully engorged breasts in breastfeeding women (Munns 2003).