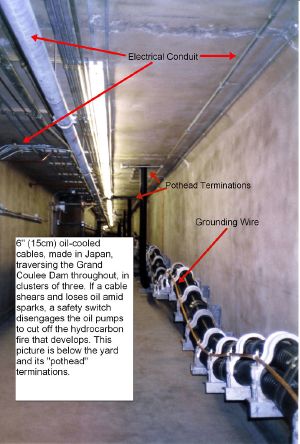 6" or 15cm outside diameter, oil-cooled cables, traversing the Grand Coulee Dam throughout. These cables are connected to powerful pumps that pump the oil through them while in operation. Safety switches turn off the oil flow in the event of a leak, in order to limit the effects of a hydrocarbon fire. 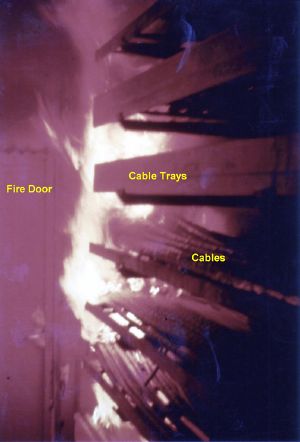 Fire test in Sweden, showing rapid fire spread through burning of cable jackets from one cable tray to another.

A cable is one or more wires or optical fibers bound together, typically in a common protective jacket or sheath. The individual wires or fibers inside the jacket may be covered or insulated. Combination cables may contain both electrical wires and optical fibers. Electrical wire is usually copper because of its excellent conductivity, but aluminum is sometimes used because it is less expensive.

Electrical cables may be made flexible by stranding the wires. In this process, smaller individual wires are twisted or braided together to produce larger wires that are more flexible than solid wires of similar size. Bunching small wires before concentric stranding adds the most flexibility. A thin coat of a specific material (usually tin, but it could be silver, gold and other materials, or the wire can be unplated—with no coating material) on the individual wires provides lubrication for longest life. Tight lays during stranding makes the cable extensible (CBA - as in telephone handset cords).

Bundling the conductors and eliminating multi-layers ensures a uniform bend radius across each conductor. Pulling and compressing forces balance one another around the high-tensile center cord that provides the necessary inner stability. As a result the cable core remains stable even under maximum bending stress.

Cables can be securely fastened and organized, such as using cable trees with the aid of cable ties or cable lacing. Continuous-flex or flexible cables used in moving applications within cable carriers can be secured using strain relief devices or cable ties.

Cables as a fire hazard

In construction, the cable jacketing is sometimes seen as a potential source of fuel for a fire. To limit the spread of fire along cable jacketing, one may use cable coating materials or one may use cables with jacketing that is inherently fire retardant. Teck cable or metal clad cables, may have exterior organic jacketing, which is often stripped off by electricians in order to reduce the fuel source for accidental fires. In Europe in particular, it is often customary to place inorganic wraps and boxes around cables in order to safeguard the adjacent areas from the potential fire threat associated with unprotected cable jacketing. All such mitigation methods are passive fire protection items subject to stringent bounding.

Circuit integrity for cables is also established by using either inherently fire resistant cables, such as Mineral-insulated copper-clad cables, or by using boxes made of proprietary insulations, such as calcium silicate, vermiculite or perlite, intumescent and/or endothermic coatings or ceramic fiber or rockwool wraps for fireproofing purposes. Electrical circuits that may have to be kept operational during an accidental building fire include, but are not limited to emergency power circuits, such as those that power exit signs in a building, power circuits for operating rooms in a hospital, or the wiring that connects control rooms and nuclear reactors. All such mitigation methods are passive fire protection items subject to stringent bounding. The toughest of test methods known in the industry are those mandated by the US Nuclear Regulatory Commission, which came about as a result of the Thermo-lag scandal,[1] which became highly publicized after disclosures made by whistleblower Gerald W. Brown.

In applications powering sensitive electronics, keeping unwanted EMI/RFI from entering circuits is important. This can be accomplished passively with shielding along the length of the cable or by running the cable in an enclosure separate from any other wires which may induct noise. It can also be actively achieved by use of a choke designed to restrict the cables' ability to conduct certain frequencies.

Cables can be sorted into several categories and types as follows.

Basic cable types are as follows:

Based on construction and cable properties it can be sorted into the following: