Tin (chemical symbol Sn, atomic number 50) is a silvery, malleable metal that is not easily oxidized in air and resists corrosion. It is obtained chiefly from the mineral cassiterite, in which it occurs as an oxide.

This metal is an important component of many alloys, including bronze, pewter, bell metal, and solder. In addition, it is used to coat items made of steel, lead, and zinc to prevent corrosion. As the most tonally resonant metal, tin is used in manufacturing organ pipes. The flat surface of window glass can be made by floating molten glass on molten tin. Also, glass can be given an electrically conductive coating by spraying it with certain tin salts. Tin(II) chloride is used as a mordant (dye-fixing agent) in the calico printing process, and a niobium-tin compound is used in wires for superconducting magnets. 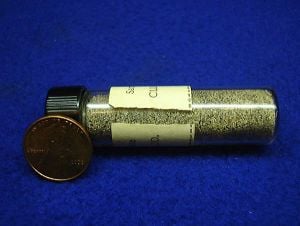 Tin (Anglo-Saxon tin, Latin stannum) is mined in about 35 countries throughout the world. Nearly every continent has an important tin-mining country. This metal is a relatively scarce element, with an abundance in the Earth's crust of about two parts per million, compared with 94 parts per million for zinc, 63 parts per million for copper, and 12 parts per million for lead. Most of the world's tin is produced from placer deposits; at least one-half comes from Southeast Asia. Tasmania hosts some important deposits of historical importance, most importantly Mount Bischoff and Renison Bell.

The only mineral of commercial importance as a source of tin is cassiterite (SnO2). Tin is produced by reducing the ore with coal in a reverberatory furnace. In addition, small quantities of tin are recovered from complex sulfides such as stannite, cylindrite, franckeite, canfieldite, and teallite. Secondary (scrap) tin is also an important source of the metal.

The alchemical symbol for tin

Tin is one of the earliest metals known and was used as a component of bronze from antiquity. Given its hardening effect on copper, tin was used in bronze implements as early as 3500 B.C.E. Tin mining is believed to have started in Cornwall and Devon (especially Dartmoor) in classical times, and a thriving tin trade developed with civilizations of the Mediterranean. The pure metal, however, was not used until about 600 B.C.E. The last Cornish tin mine, at South Crofty near Camborne, closed in 1998, bringing four thousand years of mining in Cornwall to an end. Tradition has it that Joseph of Arimathea was a tin trader and that he brought his nephew Jesus with him to Cornwall on some of his journeys.

The word "tin" has cognates in many Germanic and Celtic languages. The American Heritage dictionary speculates that the word was borrowed from a pre-Indo-European language.

Tin is located in group 14 (former group 4A) of the periodic table, between germanium and lead. In addition, it lies in period 5, between indium and antimony. It is sometimes known as a "poor metal," a name given to metals that come after the transition metals in the periodic table.

This silvery-white metal is malleable, ductile, and highly crystalline. When a bar of tin is bent, a strange crackling sound known as the "tin cry" is produced, caused by breakage of the crystals. The metal resists corrosion from distilled water, seawater, and soft, tap water, but it can be attacked by strong acids, alkalis, and acid salts. It acts as a catalyst when oxygen is in solution and helps accelerate chemical attack.

When heated in the presence of air, tin forms the dioxide (SnO2). The dioxide, in turn, is feebly acidic and forms stannate (SnO3-2) salts with basic oxides. Tin can be highly polished and is used as a protective coat for other metals, to prevent corrosion or other chemical action. This metal combines directly with chlorine and oxygen and displaces hydrogen from dilute acids. It is malleable at ordinary temperatures but is brittle when heated.

Solid tin has two allotropes at normal pressure. At low temperatures, it exists as gray or alpha tin, which has a cubic crystal structure, similar to that of silicon and germanium. When warmed above 13.2 °C, it changes into white or beta tin, which is metallic and has a tetragonal structure. When cooled, it slowly returns to the gray form, a phenomenon called tin pest or tin disease. This transformation, however, is affected by impurities such as aluminum and zinc and can be prevented from occurring by the addition of antimony or bismuth.

The small amount of tin found in canned foods is not harmful to humans. Certain organic tin compounds, such as triorganotins, are toxic and are used as industrial fungicides and bactericides.