Niobium or columbium (chemical symbol Nb, atomic number 41) is a rare, soft, gray metal. It was discovered in a variety of columbite (now called niobite) and was at first named after this mineral. It is used in alloys to make special steels and strong welded joints. At extremely low temperatures, it acts as a superconductor. 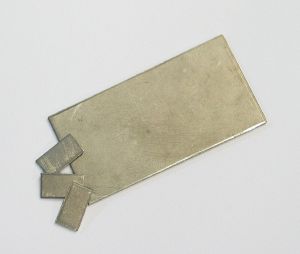 The element is never found as a free element but does occur in the minerals columbite ((Fe,Mn)(Nb,Ta)2O6), columbite-tantalite or coltan ((Fe,Mn)(Ta,Nb)2O6), pyrochlore ((Na,Ca)2Nb2O6OH,F), and euxenite ((Y,Ca,Ce,U,Th)(Nb,Ta,Ti)2O6). Minerals that contain niobium often also contain tantalum. Large deposits of niobium have been found associated with carbonatites (carbon-silicate igneous rocks) and as a constituent of pyrochlore. Brazil and Canada are the major producers of niobium mineral concentrates and extensive ore reserves are also in Nigeria, Democratic Republic of Congo, and Russia.

Niobium (Greek mythology: Niobe, daughter of Tantalus) was discovered by Charles Hatchett in 1801. Hatchett found niobium in columbite ore that was sent to England in the 1750s by John Winthrop, the first governor of Connecticut. Hatchett named the element columbium (symbol Cb).

Around that time, there was considerable confusion about the difference between this element and the closely related tantalum. This confusion was not resolved until 1846 by Heinrich Rose and Jean Charles Galissard de Marignac, who rediscovered the element. Rose was unaware of Hatchett's work and gave the element a different name, niobium. In 1864, Christian Blomstrand was the first to prepare the pure metal, reducing niobium chloride by heating it in a hydrogen atmosphere.

The International Union of Pure and Applied Chemistry (IUPAC) officially adopted "niobium" as the name for element 41 in 1950, after 100 years of controversy. This was a compromise of sorts; the IUPAC accepted tungsten instead of wolfram, in deference to North American usage; and niobium instead of columbium, in deference to European usage. Not everyone agreed, and while many leading chemical societies and government organizations refer to it by the official IUPAC name, many leading metallurgists, metal societies, and most leading American commercial producers still refer to the metal by the original "columbium."

Niobium is a transition metal that lies in period 5 of the periodic table, between zirconium and molybdenum. It is also located in group 5 (former group 5B), between vanadium and tantalum. Its chemical properties are almost identical to those of tantalum.

This shiny gray, ductile metal takes on a bluish tinge when exposed to air at room temperature for extended periods. When it is processed at even moderate temperatures, it must be placed in a protective atmosphere. The metal begins to oxidize in air at 200° C. Its most common oxidation states are +3, and +5, although others are also known.

Niobium has no known biological role. Dust of the metal is an eye and skin irritant and can also be a fire hazard. Niobium-containing compounds are relatively rarely encountered by most people, but many are highly toxic and should be handled with care.