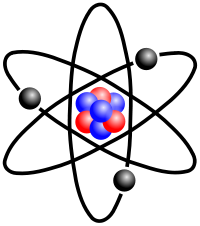 A stylized lithium-7 atom, showing 3 protons, 4 neutrons, and 3 electrons (each electron is about 1800 times smaller than a proton or neutron). Rare Lithium-6 has only 3 neutrons, reducing the atomic weight (average) to 6.941.

An element may have different atomic weights depending on the source. Nevertheless, given the cost and difficulty of isotope analysis, it is usual to use the tabulated values of standard atomic weights, which are ubiquitous in chemical laboratories.

The unified atomic mass unit (u), or dalton (Da), or, sometimes, universal mass unit, is a unit of mass used to express atomic and molecular masses. It is defined as one-twelfth of the mass of an unbound atom of carbon-12 (12C) at rest and in its ground state.[2]

In biochemistry and molecular biology, when referring to macromolecules such as proteins or nucleic acids, the term "kilodalton" is used, with the symbol kDa. Because proteins are large molecules, their masses are given in kilodaltons, where one kilodalton is 1000 daltons.

The unified atomic mass unit is approximately equal to the mass of a hydrogen atom, a proton, or a neutron.

Chemical element masses, as expressed in u, would all be close to whole number values (within 2 percent and usually within 1 percent) were it not for the fact that atomic weights of chemical elements are averaged values of the various stable isotope masses in the abundances which they naturally occur.[4] For example, chlorine has an atomic weight of 35.45 u because it is composed of 76 percent 35Cl (34.96 u) and 24 percent 37Cl (36.97 u).

Another reason for using the unified atomic mass unit is that it is experimentally much easier and more precise to compare masses of atoms and molecules (that is, determine relative masses) than to measure their absolute masses. Masses are compared with a mass spectrometer (see below).

Direct comparison and measurement of the masses of atoms is achieved by the technique known as mass spectrometry. The equation is:

In the history of chemistry, the first scientists to determine atomic weights were John Dalton, between 1803 and 1805, and Jöns Jakob Berzelius, between 1808 and 1826. Atomic weight was originally defined relative to that of the lightest element, hydrogen, which was assigned the unit 1.00. In the 1860s, Stanislao Cannizzaro refined atomic weights by applying Avogadro's law (notably at the Karlsruhe Congress of 1860). He formulated a law to determine atomic weights of elements: The different quantities of the same element contained in different molecules are all whole multiples of the atomic weight. On that basis, he determined atomic weights and molecular weights by comparing the vapor density of a collection of gases with molecules containing one or more of the chemical element in question.[5]

In the first half of the twentieth century, up until the 1960s, chemists and physicists used two different atomic mass scales. The chemists used a scale such that the natural mixture of oxygen isotopes had an atomic mass 16, while the physicists assigned the same number 16 to the atomic mass of the most common oxygen isotope (containing eight protons and eight neutrons). However, because oxygen-17 and oxygen-18 are also present in natural oxygen, this led to two different tables of atomic mass.

Comparison of u with the physical and chemical amu scales:

The unified scale based on carbon-12, 12C, met the physicists' need to base the scale on a pure isotope, while being numerically close to the old chemists' scale.

The standard scientific unit for dealing with atoms in macroscopic quantities is the mole (mol), which is defined arbitrarily as the amount of a substance with as many atoms or other units as there are in 12 grams of the carbon isotope C-12. The number of atoms in a mole is called Avogadro's number (NA), the value of which is approximately 6.022 × 1023 mol-1.

One mole of a substance always contains almost exactly the relative atomic mass or molar mass of that substance (which is the concept of molar mass), expressed in grams; however, this is almost never true for the atomic mass. For example, the standard atomic weight of iron is 55.847 g/mol, and therefore one mole of iron as commonly found on earth has a mass of 55.847 grams. The atomic mass of an 56Fe isotope is 55.935 u and one mole of 56Fe will in theory weigh 55.935g, but such amounts of the pure 56Fe isotope have never existed.

The formulaic conversion between atomic mass and SI mass in grams for a single atom is:

is the atomic mass unit and

Relationship between atomic and molecular masses

Similar definitions apply to molecules. One can compute the molecular mass of a compound by adding the atomic masses of its constituent atoms (nuclides). One can compute the molar mass of a compound by adding the relative atomic masses of the elements given in the chemical formula. In both cases the multiplicity of the atoms (the number of times it occurs) must be taken into account, usually by multiplication of each unique mass by its multiplicity.

The pattern of the amounts by which the atomic masses deviate from their mass numbers is as follows: the deviation starts positive at hydrogen-1, becomes negative until a minimum is reached at iron-56, iron-58 and nickel-62, then increases to positive values in the heavy isotopes, with increasing atomic number. This equals to the following: nuclear fission in an element heavier than iron produces energy, and fission in any element lighter than iron requires energy. The opposite is true of nuclear fusion reactions: fusion in elements lighter than iron produces energy, and fusion in elements heavier than iron requires energy.