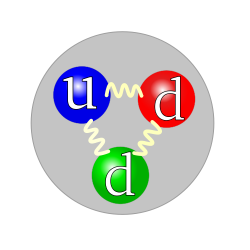 The quark structure of the neutron. There are two down quark and one up quark. The strong force is mediated by gluons. The strong force has three types of charges, the so called red, green and the blue. The color assignment of individual quarks is arbitrary, but all three colors must be present.

The neutron is a subatomic particle that is an important constituent of all atomic nuclei with one exception, that of hydrogen. It is important for the stability of nuclei that have more than one proton. As such it is one of the basic building blocks of the physical universe. Though it has no electrical charge it is composed of charged particles (quarks), whose combined charges cancel out. The neutron thus refects a relational balance of charge rather than an absence of it. It has a mass of 939.573 MeV/c² (1.6749 × 10-27 kg, slightly more than a proton). Its spin is ½. Its antiparticle is called the antineutron. The neutron and proton are both nucleons.

Outside the nucleus, neutrons are unstable and have a mean lifetime of 886 seconds (about 15 minutes), decaying by emitting an electron and antineutrino to become a proton. Neutrons in this unstable form are known as free neutrons. The same decay method (beta decay) occurs in some nuclei. Particles inside the nucleus are typically resonances between neutrons and protons, which transform into one another by the emission and absorption of pions. A neutron is classified as a baryon, and consists of two down quarks and one up quark. The neutron's antimatter equivalent is the antineutron.

The neutron interacts through all four of the common classifications of physical interaction. These four are the electromagnetic, weak nuclear, strong nuclear, and gravitational interactions.

Gravity is often not discussed when talking about neutrons. This is because neutrons are usually studied in terms of subatomic interactions. In the subatomic world, gravity is undetectable relative to the other forces, which are much stronger. This having been said, a neutron accelerates at the same rate in the earth's gravitational field as a lead brick.

Charged particles (such as protons, electrons, or alpha particles) and electromagnetic radiation (such as gamma rays) lose energy in passing through matter. They exert electric forces that ionize atoms of the material through which they pass. The energy taken up in ionization equals the energy lost by the charged particle, which slows down, or by the gamma ray, which is absorbed or scattered (see Compton scattering). The neutron, by contrast, is seen by atoms it passes as containing no electric charge, and so does not create any ionization.

As far as the nuclear forces are concerned, it is a different story. Nuclear forces play the leading role when neutrons pass through regular matter. Consequently, a free neutron goes on its way unchecked until it makes a "head-on" collision with an atomic nucleus.

Neutrons, like other particles, can undergo elastic collisions. A collision is elastic under the special case where kinetic energy is conserved. Billiard balls for example typically undergo elastic collisions. The law of conservation of momentum also applies as it does for any collision. If the nucleus that is struck in an elastic collision is heavy, it acquires relatively little speed, but if it is a proton, which is approximately equal in mass to the neutron, it is projected forward with a large fraction of the original speed of the neutron, which is itself correspondingly slowed.

The common means of detecting a charged particle by looking for a track of ionization does not work for neutrons. The means that we have for detecting neutrons consists of allowing them to interact with atomic nuclei.

A common method for detecting neutrons involves converting the energy released from such reactions into electrical signals. The isotopes 3He, 6Li, 10B, 233U, 235U and 239Pu are useful for this purpose. These substances are mostly rare or tightly controlled, except for 10B which is readily available. A good discussion on neutron detection is found in chapter 14 of the book Radiation Detection and Measurement by Glenn F. Knoll (John Wiley & Sons, 2010).

The neutron plays an important role in many nuclear reactions. For example, neutron capture often results in neutron activation, inducing nuclear fission. In particular, knowledge of neutrons and their behavior has been important in the development of nuclear reactors and nuclear weapons.

The development of "neutron lenses" based on total internal reflection within hollow glass capillary tubes or by reflection from dimpled aluminum plates has driven ongoing research into neutron microscopy and neutron/gamma ray tomography.

One use of neutron emitters is the detection of light nuclei, particularly the hydrogen found in water molecules. When a fast neutron collides with a light nucleus, it loses a large fraction of its energy. By measuring the rate at which slow neutrons return to the probe after reflecting off of hydrogen nuclei, a neutron probe may determine the water content in soil.

Due to the fact that free neutrons are unstable, they (neutron radiation) can be obtained only from nuclear disintegrations or high-energy reactions (such as cosmic radiation or in accelerators). Free neutron beams are obtained from neutron sources by neutron transport.

Neutrons' lack of electric charge prevents engineers or experimentalists from being able to steer or accelerate them. Charged particles can be accelerated, decelerated, or deflected by electric or magnetic fields. However, these methods have almost no effect on neutrons (there is a small effect of a magnetic field on the free neutron because of its magnetic moment).

In 1930 Walther Bothe and H. Becker in Germany found that if the very energetic alpha particles emitted from polonium fell on certain of the light elements, specifically beryllium, boron, or lithium, an unusually penetrating radiation was produced. At first this radiation was thought to be gamma radiation although it was more penetrating than any gamma rays known, and the details of experimental results were very difficult to interpret on this basis. The next important contribution was reported in 1932 by Irène Joliot-Curie and Frédéric Joliot in Paris. They showed that if this unknown radiation fell on paraffin or any other hydrogen-containing compound it ejected protons of very high energy. This was not in itself inconsistent with the assumed gamma ray nature of the new radiation, but detailed quantitative analysis of the data became increasingly difficult to reconcile with such an hypothesis. Finally (later in 1932) the physicist James Chadwick in England performed a series of experiments showing that the gamma ray hypothesis was untenable. He suggested that in fact the new radiation consisted of uncharged particles of approximately the mass of the proton, and he performed a series of experiments verifying his suggestion. Such uncharged particles were eventually called neutrons, apparently from the Latin root for neutral and the Greek ending -on (by imitation of electron and proton).

The existence of stable clusters of four neutrons, or tetraneutrons, has been hypothesized by a team led by Francisco-Miguel Marqués at the CNRS Laboratory for Nuclear Physics based on observations of the disintegration of beryllium-14 nuclei. This is particularly interesting, because current theory suggests that these clusters should not be stable, and therefore do not exist.

CPT-symmetry puts strong constraints on the relative properties of particles and antiparticles, and therefore is open to stringent tests. The masses of the neutron and antineutron are equal to one part in (9±5)×10-5.