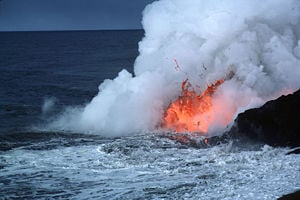 Lava flows from the Kīlauea volcano into the ocean on the island of Hawaii.

Earth science (also known as the Earth Sciences, geoscience, or the geosciences) is an umbrella term for the sciences related to the planet Earth. The main disciplines within Earth science include geology, geodesy, geophysics, soil science, oceanography, hydrology, glaciology, and atmospheric sciences. These disciplines are oriented toward studying the various areas or "spheres" of the Earth system, such as the atmosphere, hydrosphere, lithosphere, and biosphere.

Earth science is arguably a special case in planetary science, being the only known life-bearing planet. Given the numerous interactions between the Earth's spheres, many modern fields of earth science are formed with interdisciplinary approaches.

The above specialties do not operate in isolation. For example, to understand the circulation of the oceans, one must study the interactions between the ocean, atmosphere, and Earth's rotation.

Other fields of research involve greater interdisciplinary interactions. Some of them are listed below.

Many scientists have begun using an approach known as Earth system science. They treat the entire Earth as a system in its own right, which develops as a result of positive and negative feedback between constituent systems. In the systems approach, scientists combine the use of computer models with global satellite and shipboard data, in attempting to understand the Earth's past and to predict its future behavior.

"Gaia theories" are formulated to explain the behavior of the Earth system in terms of the influence of the biosphere.