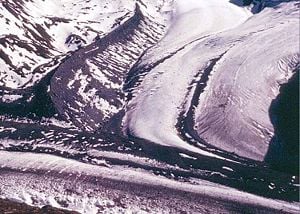 Lateral moraine on a glacier joining the Gorner Glacier in Zermatt, Switzerland. The moraine is the high bank of debris on the left side of the image.

Glaciology is the study of natural forms of ice, particularly glaciers, and phenomena related to ice. It includes the study of how glaciers are formed and depleted, how they move, and how they affect the physical landscape, the climate, and living organisms. It is one of the key areas of polar research. It also involves research into glacial history and the reconstruction of past glaciation, thus providing insights into the ice ages. The apparent presence of ice on Mars and Jupiter's moon Europa brings in an extraterrestrial component to the field.

Thus, glaciology is an interdisciplinary earth science, integrating geophysics, geology, physical geography, geomorphology, climatology, meteorology, hydrology, biology, and ecology. The impact of glaciers on humans adds the fields of human geography and anthropology. A person who studies glaciers is called a glaciologist.

The word glacier can be traced to the Middle French dialect (Franco-Provençal) term glace, meaning "ice," derived from the Latin term glacies, meaning "frost" or "ice." The word "glaciology" is formed by combining this root with the Greek word λόγος (logos), meaning "speech" or "word."

The process of glaciation is placed in two general categories, described below.

Glacial movements and their effects 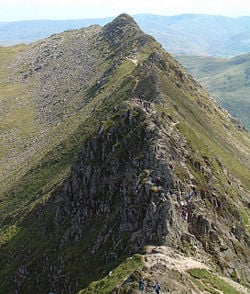 Striding Edge, an arête viewed from Helvellyn with the corrie Red Tarn to the left and Nethermost Cove to the right.