Gladys Knight & the Pips were an R&B/soul musical act from Atlanta, Georgia, active from 1953 to 1989. The group was best known for its string of hit singles from 1967 to 1975, including "I Heard It Through the Grapevine" (1967) and "Midnight Train to Georgia" (1973). The longest-lived incarnation of the act featured Gladys Knight on lead vocals, with her brother Merald "Bubba" Knight on backing vocals, together with their cousins Edward Patten and William Guest.

The group first recorded at Motown and later on the Buddah label. It disbanded after its final performing tour in 1988, as Knight decided she wanted to pursue a solo career.

In 1973, "Midnight Train to Georgia" won the Grammy for Best R&B Performance by a Duo or Group with Vocals. Later, the song received the Grammy Hall Of Fame Award, recognizing it as a recording of lasting qualitative or historical significance. The group was inducted into the Rock and Roll Hall of Fame in 1996, received a Lifetime Achievement Award from the Rhythm & Blues Foundation in 1998, and entered the Vocal Group Hall of Fame in 2001.

Gladys Knight's career took off when she was just seven years old, when she won Ted Mack's Original Amateur Hour television show contest in 1952. The following year, she, her brother Bubba, sister Brenda, and their cousins William and Eleanor Guest started "The Pips" (named after another cousin, James "Pip" Woods). The Pips began to perform and tour, eventually replacing Brenda Knight and Eleanor Guest with cousins Langston George and Edward Patten in 1959.

The Pips scored their first hit in 1961, with "Every Beat of My Heart," a cover of a Hank Ballard & The Midnighters song, for Vee-Jay records. The song became a number-one R&B and number-six pop hit. Shortly afterward, Langston George left the group, and the remaining members continued as a quartet, now billed as Gladys Knight & the Pips. Typically, most of the act's recordings featured Knight's contralto on lead vocals and the three male members of the group providing characteristic background vocals.

After a second Vee-Jay hit, "Letter Full of Tears," in 1962, Knight quit the group to start a family. The Pips toured on their own for two years, until Knight returned to the act in 1964 in order to support her two children. That year the group had another modest hit with "Giving Up."

Gladys Knight & the Pips developed a reputation for exciting and polished live performances that enabled them to work steadily even without the benefit of best-selling records. Choreographer Cholly Atkins designed "fast-stepping" dance routines that became a signature of the Pips' stage presentation. 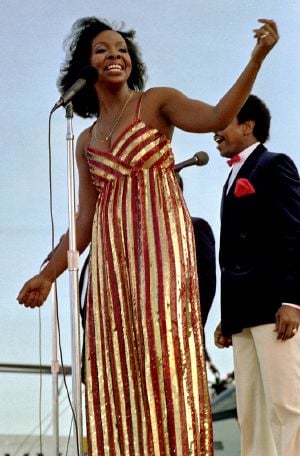 Knight and the Pips largest success came after they signed with Motown in 1966. Their top-40 hit "Everybody Needs Love," was followed by the breakthrough success of "I Heard It Through the Grapevine," which became a number-two pop hit on the Billboard Hot 100 and a number-one R&B hit for six weeks. The record sold 2.5 million copies, and at the time was Motown's best-selling single ever. In late 1968, "Grapevine" would become an even bigger hit for Marvin Gaye, whose version, recorded before Knight's but released a year afterward, became a number-one pop hit for seven weeks.

Knight and the Pips departed Motown for Buddah Records in 1973. Knight later complained that she and the Pips were regarded as a second-string act, and that Diana [Ross] & the Supremes, The Temptations, and Marvin Gaye were given the best songs, while "we took the leftovers." In Knight's autobiography she alleged that Diana Ross had the group removed from being The Supremes' opening act on a 1966 tour for being too good.

Recording for Buddah in the mid 1970s, the group hit its popular and critical peak with number-one R&B hits such as "I've Got to Use My Imagination," and "Best Thing That Ever Happened To Me." Their most notable success was their only number-one pop hit, "Midnight Train to Georgia," which won the Grammy for Best R&B Performance by a Duo or Group with Vocals of 1973. The song eventually received the Grammy Hall Of Fame Award, which was established by the Recording Academy's National Trustees to honor recordings of lasting qualitative or historical significance. Many of Gladys Knight and the Pips' hits in the mid-1970s were written by country songwriter Jim Weatherly. The group charted with five of Weatherly's songs in 1973 and 1974: "Midnight Train to Georgia," "Neither One of Us," "Where Peaceful Waters Flow," "The Best Thing That Ever Happened to Me," and "Between Her Goodbye and My Hello."

Gladys Knight & the Pips' debut LP on Buddah, Imagination, was certified as a gold record. This began a string of LPs that were awarded gold status: Claudine (1974), I Feel a Song (1974), and 2nd Anniversary (1975). Other hit singles for Buddah included "Part-Time Love," the R&B number one "I Feel a Song (In My Heart)," "Love Finds Its Own Way," and "The Way We Were/Try to Remember."

Curtis Mayfield served as their producer in 1974 when Knight and the Pips recorded the soundtrack to the motion picture Claudine, resulting in a number-five hit with the film's theme song, "On and On." The following year, the group hosted its own hour-long musical variety television program, The Gladys Knight & the Pips Show, which ran for four episodes on NBC as a summer-season replacement. 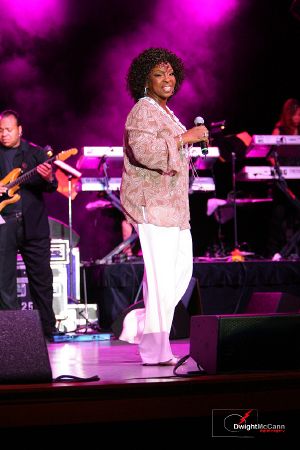 Knight and the Pips continued to have R&B hits until the late 1980s. From 1978 to 1980, the Pips and Gladys recorded as separate acts due to legal problems with Buddah. During this time, Knight released two solo albums and the Pips released two albums of their own.

In 1980, the Pips signed to Columbia Records, for which Knight had recorded her second solo album. Teaming up with songwriting husband/wife duo Nickolas Ashford and Valerie Simpson, the reunited Gladys Knight & The Pips released the album About Love in 1980, which featured "Landlord" and "Taste Of Bitter Love." Ashford & Simpson continued with Knight and the Pips for the 1981 follow-up, Touch, featuring "I Will Fight" and a cover of "I Will Survive." Also in 1981, the group provided prominent backing vocals for Kenny Rogers on his remake of Bobby "Blue" Bland's "Share Your Love With Me."

After an international tour, Knight and the Pips recorded the LP Visions (1983), which resulted in a number-one R&B hit with "Save the Overtime (For Me)" and was certified gold. In 1987, the group released its final album, All Our Love, on MCA Records which was also certified gold. The album's single "Love Overboard" became a number-one R&B hit which won the 1988 Grammy for Best R&B Performance by a Duo or Group.

Gladys Knight & the Pips embarked on their final tour in 1988 and disbanded upon its conclusion, as Gladys Knight decided she wanted to pursue a solo career. The Pips retired while Gladys Knight began scoring hits of her own with singles such as "Men" (1991) and "I Don't Want to Know" (1994).

Gladys Knight and the Pips had a remarkably long career in which, unlike other top Motown groups of the 60s, they continued to score hits and produce gold albums for more than two decades after "Heard It Through the Grapevine" first brought them to national attention.

In addition to their several Grammy awards and other honors, in 1988 the band also won a Soul Train Music Award for Career Achievement. The group was inducted into the Rock and Roll Hall of Fame in 1996, the Vocal Group Hall of Fame in 2001, and received a Lifetime Achievement Award from the Rhythm & Blues Foundation in 1998.

Knight, now a member of The Church of Jesus Christ of Latter-day Saints, continues to tour and record occasionally, and leads the Saints Unified Voices choir. Edward Patten of the Pips died in February 2005, of complications from his long bout with diabetes.

Retrieved from https://www.newworldencyclopedia.org/p/index.php?title=Gladys_Knight_%26_the_Pips&oldid=1005284
Categories:
Hidden category:
This page was last edited on 23 June 2017, at 16:04.
Content is available under Creative Commons Attribution/Share-Alike License; additional terms may apply. See Terms of Use for details.