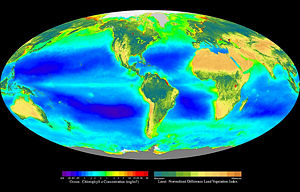 A false-color composite of global oceanic and terrestrial photoautotroph abundance, from September 1997 to August 2000. Provided by the SeaWiFS Project, NASA/Goddard Space Flight Center and ORBIMAGE.

Biosphere is historically and most commonly defined as that part of the Earth in which living organisms exist. As such, it is viewed as a place or supporting stratum that overlaps with the inner portion of the atmosphere, the upper part of the geosphere, and almost all of the hydrosphere (Mayhew 2004; Margulis and Sagan 2002). Another concept of the biosphere is as simply "life on earth," in other words, the total of all living things on earth (Knight and Schlager 2002). As such, the biosphere is one of four mutually exclusive spheres, the others being the atmosphere, geosphere (or lithosphere), and hydrosphere. Yet, another definition of biosphere includes both the living organisms and their environment (McGraw-Hill 2005).

Viewed as a place, the biosphere takes up a relatively small portion of the earth, perhaps with the overall dimensions of a hollow sphere about twenty-three kilometers wide, or about 0.0007 percent of the volume of the plant (6371 kilometer radius) (Margulis and Sagan 2002). Viewed as limited to only the living organisms, the biosphere occupies about 0.00008 percent of the mass of the earth (Knight and Schlager 2002).

The biosphere harmoniously interrelates with the other major spheres of the earth (lithosphere, hydrosphere, and atmosphere), and as small as the biosphere is, living organisms greatly impact each of these spheres, as seen in the various biogeochemical cycles (oxygen cycle, water cycle, carbon cycle, nitrogen cycle, etc.). So integral are the interactions of living organisms and their environment, that some view the entire Earth as a living organism. (See Gaia hypothesis.)

Origin and use of the term 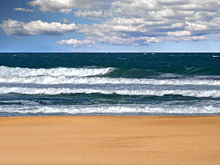 A familiar scene on Earth which simultaneously shows the lithosphere, hydrosphere, and atmosphere.

The term "biosphere" was coined by geologist Eduard Suess in 1875. He defined biosphere as (Seuss 1875):

The place on earth's surface where life dwells.

Many current definitions reflect this historical concept. Margulis and Sagan (2002) define biosphere as "the place where life exists," and Mayhew (2004) as "the zone where life is found." As a particular stratum of earth, it includes part of the atmosphere, much of the hydrosphere, and part of the geosphere or lithosphere (solid outermost shell of the Earth).

While this concept has a geological origin, it is an indication of the impact of both Charles Darwin (1809 - 1882) and American oceanographer and meterologist Matthew Maury (1806 - 1873) on the earth sciences.

Other concepts of biosphere

Biosphere as life on earth definition. Some life scientists and earth scientists use biosphere in the sense of "life on earth"; that is, the total sum of living organisms (the "biomass" or "biota" as referred to by biologists and ecologists). In this sense, the biosphere is but one of four separate components of the overall earth system, the other three being geosphere (or lithosphere), hydrosphere, and atmosphere. The biosphere works in concert with these other major earth systems (Knight and Schlager 2002).

Biosphere as life and its environment. A broader meaning of biosphere is all of the living organisms and their environment. Included is all of the environments capable of sustaining life as well as all living organisms (McGraw Hill 2005). In this sense, biosphere overlaps almost the entire hydrosphere, as well as parts of the atmosphere and lithosphere (McGraw Hill 2005). Characteristic of this sense of the term is the interrelationships of living things and their environments (McGraw Hill 2005). Some might prefer the word ecosphere, coined in the 1960s, as all encompassing of both biological and physical components of the planet. The biosphere's ecological context comes from the 1920s, preceding the 1935 introduction of the term "ecosystem" by Sir Arthur Tansley. Soviet mineralogist and geochemist Vladimir Vernadsky (1863 - 1945) defined ecology as the science of the biosphere. He is most noted for his 1926 book The Biosphere in which he inadvertently worked to popularize Eduard Suess’ term biosphere, by hypothesizing that life is the geological force that shapes the earth.

Gaia's biosphere. The concept that the biosphere is itself a living organism, either actually or metaphorically, is known as the Gaia hypothesis. James Lovelock, an atmospheric scientist from the United Kingdom, proposed the Gaia hypothesis to explain how biotic and abiotic factors interact in the biosphere. This hypothesis considers Earth itself a kind of living organism. Its atmosphere, geosphere, and hydrosphere are cooperating systems that yield a biosphere full of life. In the early 1970s, Lynn Margulis, a microbiologist from the United States, added to the hypothesis specifically noting the ties between the biosphere and other Earth systems. For example, when carbon dioxide levels increase in the atmosphere, plants grow more quickly. As their growth continues, they remove more and more carbon dioxide from the atmosphere.

Nearly every part of the hydrosphere, upper part of the lithosphere, and lower part of the atmosphere supports life of some kind, from the polar ice caps to the Equator. Recent advances in microbiology have demonstrated that microbes live deep beneath the Earth's terrestrial surface, and that the total mass of microbial life in so-called "uninhabitable zones" may, in biomass, exceed all animal and plant life on the surface.

The actual thickness of the biosphere on earth is hard to measure. Birds typically fly at altitudes of 650 to 2000 meters, and fish that live deep underwater can be found down to -8,372 meters in the Puerto Rico Trench.

There are more extreme examples for life on the planet. Rüppell's Vulture has been found at altitudes of 11,300 meters. Bar-headed Geese migrate at altitudes of at least 8,300 meters (over Mount Everest). Yaks live at elevations between 3,200 to 5,400 meters above sea level. Mountain goats live up to 3,050 meters. Herbivorous animals at these elevations depend on lichens, grasses, and herbs, but the biggest tree is the Tine palm or mountain coconut found 3,400 meters above sea level.

Microscopic organisms live at such extremes that, taking them into consideration puts the thickness of the biosphere much greater. Culturable microbes have been found in the Earth's upper atmosphere as high as 41 kilometers (Wainwright et al, 2003). It is unlikely, however, that microbes are active at such altitudes, where temperatures and air pressure are extremely low and ultraviolet radiation very high. More likely these microbes were brought into the upper atmosphere by winds or possibly volcanic eruptions. Barophilic marine microbes have been found at more than ten kilometers in depth (10,897 meters) in the Marianas Trench (Takamia et al, 1997).

Microbes are not limited to the air, water, or the Earth's surface. Culturable thermophilic microbes have been extracted from cores drilled more than five kilometers into the Earth's crust in Sweden (Gold 1992; Szewzyk 1994) from rocks between 65 to 75 degrees centigrade. Temperature increases rapidly with increasing depth into the Earth's crust. The speed at which the temperature increases depends on many factors, including type of crust (continental vs. oceanic), rock type, geographic location, and so forth. The upper known limit of microbial is 121 degrees centigrade (Kashefi and Lovely 2003), and it is likely that the limit of life in the "deep biosphere" is defined by temperature rather than absolute depth.

Based on smaller dimensions of life occurring from fourteen kilometers below sea level in the ocean to eight kilometers above sea level on the highest mountains and at least three kilometers into the Earth's lithosphere, Margulis and Sagan (2002) estimated that the biosphere has the overall dimension of a hollow sphere some twenty-three kilometers wide. This yields about 0.0007 percent of the volume of the planet, which has a 6371 kilometer radius.

Knight and Schlager (2002) calculate that the lithosphere (the extreme upper layer of the Earth, not including the lower mantle and core) accounts for about 82 percent of the combined mass of the four systems, the hydrosphere a little more than eight percent, and the atmosphere less than one percent. The biosphere mass, which they consider only the living organisms, accounts for only 0.00008 percent of these four systems. Within this, the animal kingdom accounts for less than two percent.

Biomass itself accounts for about 3.7 kilograms carbon per square meter of the earth's surface averaged over land and sea, making a total of about 1900 gigatonnes of carbon.

Our biosphere is divided into a number of biomes, inhabited by broadly similar flora and fauna. On land, biomes are separated primarily by latitude. Terrestrial biomes lying within the Arctic and Antarctic Circles are relatively barren of plant and animal life, while most of the more populous biomes lie near the equator. Terrestrial organisms in temperate and Arctic biomes have relatively small amounts of total biomass, smaller energy budgets, and display prominent adaptations to cold, including world-spanning migrations, social adaptations, homeothermy, estivation, and multiple layers of insulation.

When the word Biosphere is followed by a number, it is usually referring to a specific system. Thus: