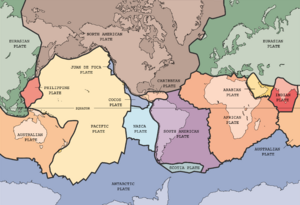 The tectonic plates of the Earth's lithosphere.

The lithosphere (from the Greek for "rocky" sphere) is the solid, outermost shell of a rocky planet. In the case of the Earth, the lithosphere includes the crust and the upper layer of the mantle that is joined to the crust. The lithosphere contains a rich variety of minerals. In addition, it continually interacts with the atmosphere and hydrosphere.

The Earth's lithosphere provides us with the "terra firma" on which we live. To sustain our lives, we need access to air, water, soil, and sunlight, and we need the ecosystems created by plants and animals. The lithosphere gives us access to all of these simultaneously. While dwelling on the lithosphere, we are surrounded by air, receive the Sun's heat and light, and have access to freshwater and various minerals that we use for our domestic, agricultural, and industrial activities.

The oceanic crust is generally less than 10 kilometers (km) thick, and its mean density is about 3.3 grams per cubic centimeter (g/cm3). The thickness of the continental crust ranges from 20 to 80 km, and its density is less than 3 g/cm3.

As a consequence of the density difference, when active margins of continental crust meet oceanic crust in regions known as subduction zones, the oceanic crust typically sinks beneath the continental crust and is recycled back into the mantle. At the same time, new oceanic crust is continually being produced at mid-ocean ridges from mantle material. In addition, as the oceanic lithosphere grows older, it gets cooler and denser, with the result that if two oceanic plates converge, the older one will subduct below the younger one. As a consequence of these processes, most of the present-day oceanic crust is less than 200 million years old.

The oceanic crust is composed mainly of mafic rocks. The term mafic is applied to silicate minerals and rocks that have high concentrations of relatively heavy elements, particularly magnesium and iron. The word "mafic" is derived by combining letters from magnesium and ferrum, the Latin word for iron [1].

The continental crust consists predominantly of felsic rocks. The term felsic is used in referring to silicate minerals, magmas, and rocks that are enriched in silica and light elements such as oxygen, aluminium, sodium, and potassium. The word "felsic" combines letters from the words feldspar and silica. Felsic minerals are usually light in color. Common felsic minerals include quartz, biotite, muscovite, hornblende, orthoclase, and sodium-rich plagioclase feldspars. The most common felsic rock is granite.