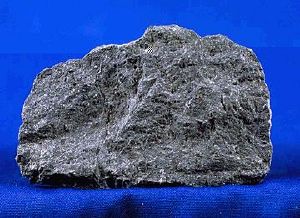 Basalt is a common, gray to black volcanic rock. It is usually fine-grained due to rapid cooling of lava on the Earth's surface. It may be porphyritic containing larger crystals in a fine matrix, or vesicular, or frothy scoria. Unweathered basalt is black or gray. Pliny used the word basalt, which is said to have an Ethiopian origin, meaning a black stone.

Basalt magmas form by decompression melting of peridotite in the Earth's mantle (see Igneous rock). The crustal portions of oceanic tectonic plates are comprised predominantly of basalt, produced from upwelling peridotite in the mantle below ocean ridges. 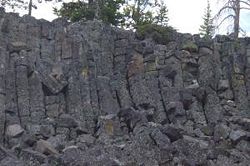 The term basalt is at times applied to shallow intrusive rocks with a composition typical of basalt, but rocks of this composition with a phaneritic (coarse) groundmass are generally referred to as dolerite (also called diabase) or gabbro. 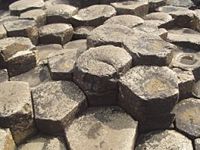 The mineralogy of basalt is characterized by a preponderance of calcic plagioclase feldspar and pyroxene. Olivine can also be a significant constituent. Accessory minerals present in relatively minor amounts include iron oxides and iron-titanium oxides, such as magnetite, ulvospinel, and ilmenite. Because of the presence of such oxide minerals, basalt can acquire strong magnetic signatures as it cools, and paleomagnetic studies have made extensive use of basalt.

In tholeiitic basalt, pyroxene (augite and orthopyroxene or pigeonite) and calcium-rich plagioclase are common phenocryst minerals. Olivine may also be a phenocryst, and when present, may have rims of pigeonite. The groundmass contains interstitial quartz or tridymite or cristobalite. Olivine tholeiite has augite and orthopyroxene or pigeonite with abundant olivine, but olivine may have rims of pyroxene and is unlikely to be present in the groundmass.

In high-alumina basalts, phenocrysts of feldspar commonly are bytownite in composition. Other common phenocryst minerals are olivine and augite; orthopyroxene is less common. Silica minerals and/or alkali feldspar may be present in the groundmass.

Alkali basalts typically have mineral assemblages that lack orthopyroxene but contain olivine. Feldspar phenocrysts typically are labradorite to andesine in composition. Augite is rich in titanium compared to augite in tholeiitic basalt. Minerals such as alkali feldspar, leucite, nepheline, sodalite, phlogopite mica, and apatite may be present in the groundmass.

Basalt has high liquidus and solidus temperatures—values at the Earth's surface are near or above 1200°C (liquidus) and near or below 1000°C (solidus); these values are higher than those of other common igneous rocks.

The majority of tholeiites are formed at approximately 50-100 km depth within the mantle. Many alkali basalts may be formed at greater depths, perhaps as deep as 150-200 km. The origin of high-alumina basalt continues to be controversial, with interpretations that it is a primary melt and that instead it is derived from other basalt types (e.g., Ozerov, 2000).

Basalt compositions are rich in MgO and CaO and low in SiO2 and Na2O plus K2O relative to most common igneous rocks, consistent with the TAS classification.

High alumina basalts have aluminium contents of 17-19 wt percent Al2O3; boninites have magnesium contents of up to 15 percent MgO. Rare feldspathoid-rich mafic rocks, kin to alkali basalts, may have Na2O plus K2O contents of 12 percent or more.

MORB basalt, a tholeiite particularly low in total alkalis and in incompatible trace elements, has a flat REE pattern normalized to mantle or chondrite values. In contrast, alkali basalts have normalized patterns highly enriched in the light REE, and with greater abundances of the REE and of other incompatible elements.

Isotope ratios of elements such as strontium, neodymium, lead, hafnium, and osmium in basalts have been much-studied, so as to learn about evolution of the Earth's mantle. Isotopic ratios of noble gases, such as 3He/4He, are also of great value: for instance, ratios for basalts range from 6 to 10 for mid-ocean ridge tholeiite (normalized to atmospheric values), but to 15-24+ for ocean island basalts thought to be derived from mantle plumes.

The shape, structure and texture of a basalt is diagnostic of the way it erupted and where it erupted - whether into the sea, in an explosive cinder eruption or as creeping pahoehoe lava flows, the classical image of Hawaiian basalt eruptions. 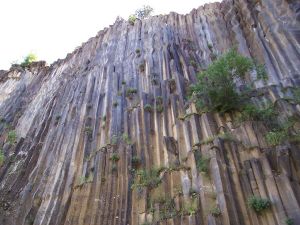 Basalt which erupts under open air (that is, subaerially) forms three distinct types of lava or volcanic deposits: scoria, ash or cinder; breccia and lava flows.

Basalt in the tops of subaerial lava flows and cinder cones will often be highly vesiculated, imparting a lightweight "frothy" texture to the rock. Basaltic cinders are often red, colored by oxidized iron from weathered iron-rich minerals such as pyroxene.

‘A‘a types of blocky, cinder and breccia flows of thick, viscous basaltic magma are common in Hawaii and other basalts which erupt slightly cooler. Pahoehoe is a highly fluid, hot form of basalt which tends to form thin aprons of molten lava which fill up hollows and form lava lakes. Lava tubes are common features of pahoehoe eruptions.

Basaltic tuff or pyroclastic rocks are rare but not unknown. Usually basalt is too hot and fluid to build up sufficient pressure to form explosive lava eruptions but occasionally this will happen by trapping of the lava within the volcanic throat and build up of volcanic gases. Hawaii's Mauna Loa erupted in this way in the nineteenth century. Another example is the 0.2Ma Diamond Head Tuff, Hawaii. 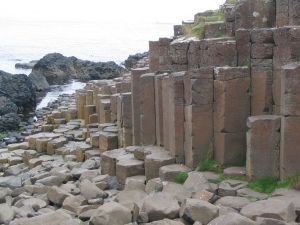 Maar volcanoes are typical of small basalt tuffs, formed by explosive eruption of basalt through the crust, forming an apron of mixed basalt and wall rock breccia and a fan of basalt tuff further out from the volcano.

Amygdaloidal structure is common in relict vesicles and beautifully crystallized species of zeolites, quartz or calcite are frequently found.

During the cooling of a thick lava flow, contractional joints or fractures form. If a flow cools relatively rapidly, significant contraction forces build up. While a flow can shrink in the vertical dimension without fracturing, it cannot easily accommodate shrinking in the horizontal direction unless cracks form. The extensive fracture network that develops results in the formation of columns. Because hexagons fit together efficiently with no vacant space (a tessellation), this is the most common pattern that develops. Pentagonal, heptagonal or octagonal joint patterns are also known, but are less common. Note that the size of the columns depends loosely on the rate of cooling; very rapid cooling may result in very small (less than one cm diameter) columns, and vice versa.

Perhaps the most famous basalt flow in the world is the Giant's Causeway on the northern coast of Ireland, in which the vertical joints form hexagonal columns and give the impression of having been artificially constructed. 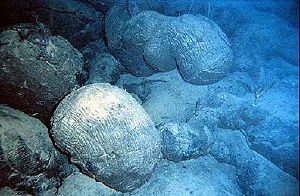 When basalt erupts underwater or flows into the sea, the cold water quenches the surface and the lava forms a distinctive pillow shape, through which the hot lava breaks to form another pillow. This pillow texture is very common in underwater basaltic flows and is diagnostic of an underwater eruption environment when found in ancient rocks. Pillows typically consist of a fine-grained core with a glassy crust and have radial jointing. Size of individual pillows vary from 10 cm up to several metres.

When pahoehoe lava enters the sea it usually forms pillow basalts. However when a'a enters the ocean it forms a littoral cone, a small cone-shaped accumulation of tuffaceous debris formed when the blocky a'a lava enters the water and explodes from built-up steam.

The island of Surtsey in the Atlantic is a basalt volcano which breached the ocean surface in 1963. The initial phase of Surtsey's eruption was highly explosive, as the magma was quite wet, causing the rock to be blown apart by the boiling steam to form a tuff and cinder cone. This has subsequently moved to a typical pahoehoe type behavior.

Glass may be present, particularly as rinds on rapidly chilled surfaces of lava flows, and is commonly (but not exclusively) associated with underwater eruptions.

The lava flows of the Deccan Traps in India, the Siberian Traps in Russia, the Columbia River Plateau of Washington and Oregon, as well as parts of the California inner coastal ranges in the United States, as well as the Triassic lavas of eastern North America are basalts. Other famous accumulations of basalts include Iceland and the islands of the Hawaii volcanic chain, forming above a mantle plume. Basalt is the rock most typical of large igneous provinces.

Ancient Precambrian basalts are usually only found in fold and thrust belts, and are often heavily metamorphosed. These are known as greenstone belts, because low-grade metamorphism of basalt produces chlorite, actinolite, epidote and other green-hued minerals.

The dark areas visible on Earth's moon, the lunar maria, are plains of flood basaltic lava flows. These rocks were sampled by the manned American Apollo program, the robotic Russian Luna program, and are represented among the lunar meteorites.

Lunar basalts differ from their terrestrial counterparts principally in their high iron contents, which typically range from about 17 to 22 wt percent FeO. They also possess a stunning range of titanium concentrations (present in the mineral ilmenite), ranging from less than one wt percent TiO2, to about 13 wt percent. Traditionally, lunar basalts have been classified according to their titanium content, with classes being named high-Ti, low-Ti, and very-low-Ti. Nevertheless, global geochemical maps of titanium obtained from the Clementine mission demonstrate that the lunar maria possess a continuum of titanium concentrations, and that the highest concentrations are the least abundant.

Lunar basalts show exotic textures and mineralogy, particularly shock metamorphism, lack of the oxidation typical of terrestrial basalts, and a complete lack of hydration. While most of the Moon's basalts erupted between about 3 and 3.5 billion years ago, the oldest samples are 4.2 billion years old, and the youngest flows, based on the age dating method of "crater counting," are estimated to have erupted only 1.2 billion years ago.

Basalts are important rocks within metamorphic belts, as they can provide vital information on the conditions of metamorphism within the belt. Various metamorphic facies are named after the mineral assemblages and rock types formed by subjecting basalts to the temperatures and pressures of the metamorphic event. These are;