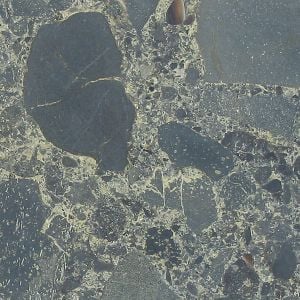 Neugrundbreccia, composed mainly of gneiss and amphibolite, is a result of meteorite impact 540 million years ago. 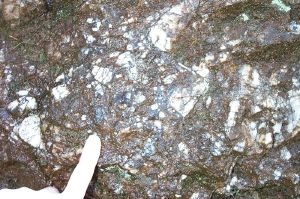 Hydrothermal breccia, Cloghleagh Iron Mine, near Blessington in Ireland, composed mainly of quartz and manganese oxides, the result of seismic actvity about 12 million years ago.

Breccia (Italian: breach) is a rock composed of angular fragments of rocks or minerals in a matrix (or cementing material) that may be similar to or different in composition from the fragments. Breccia rocks may have a variety of different origins, as indicated by their names. They include sedimentary, tectonic, igneous, impact, and hydrothermal breccia.

Given their striking aesthetic appeal, breccias have been selected for architectural, sculptural, and other ornamental material for millennia. Many types of marble are brecciated.

Breccias can be classified by their constituents, mode of occurrence, constituent fragment size, the types of clasts and source of clasts. Several textural terms are used to describe the morphology and textural variations observed in breccias.

Milling
Breccias which are formed by injection of a slurry (be it as a hydrofracture breccia or, more usually, a volcanic or intrusive breccia) often show evidence of rounding of the clasts. With a sedimentary rock this may be called a conglomerate, except when the breccia is discordant with former lithology (clastic dike). For an intrusive breccia, erosion and transport in a watercourse cannot be invoked to explain rounding. Breccias of this type which are rounded are said to be milled, a process by which the breccia matrix grinds the larger clasts and rounds them off. This has been observed to have occurred in some hydrothermal breccias.

Autobrecciation
Autobrecciation is the process by which a rock's mechanism of formation causes it to become broken and to include its broken fragments within itself. This is properly explained in the section on lava (Volcanic breccias).

The other derivation of sedimentary breccia is as angular, poorly sorted, very immature fragments of rocks in a finer grained groundmass, produced by mass wasting. These are, in essence, lithified colluvium. Thick sequences of sedimentary (colluvial) breccias are generally formed next to fault scarps in grabens.

In the field, it may at times be difficult to distinguish between a debris flow sedimentary breccia and a colluvial breccia, especially if one is working entirely from drilling information. Sedimentary breccias are an integral host rock for many SEDEX ore deposits.

Sedimentary breccias can be described as 'arenaceous', from the Latin word harena meaning 'sand', which are sandy or pebbly in nature.

A conglomerate by contrast is a sedimentary rock composed of rounded fragments or clasts of pre-existing rocks. Both breccias and conglomerates are composed of fragments averaging greater than two millimeters in size. The angular shape of the fragments indicate that the material has not been transported far from its source. Breccias indicate accumulation in a juvenile stream channel or accumulations because of gravity erosion. Talus slopes might become buried and the talus cemented in a similar manner.

Tectonic breccias form similarly, where two tectonic plates create a crumbling of the interface, by their relative movements.

Fault breccias result from the grinding action of two fault blocks as they slide past each other. Subsequent cementation of these broken fragments may occur by means of mineral matter introduced by groundwater.

Igneous clastic rocks can be divided into two classes:

Volcanic pyroclastic rocks are formed by explosive eruption of lava and any rocks which are entrained within the eruptive column. This may include rocks plucked off the wall of the magma conduit, or physically picked up by the ensuing pyroclastic surge. Lavas, especially rhyolite and dacite flows, tend to form clastic volcanic rocks by a process known as autobrecciation. This occurs when the thick, nearly solid lava breaks up into blocks and these blocks are then reincorporated into the lava flow again and mixed in with the remaining liquid magma. The resulting breccia is uniform in rock type and chemical composition.

Lavas may also pick up foreign rock fragments, especially if flowing over unconsolidated rubble on the flanks of a volcano, and these form volcanic breccias, also called pillow breccias.

Clastic rocks are also commonly found in shallow subvolcanic intrusions such as porphyry stocks, granites and kimberlite pipes, where they are transitional with volcanic breccias.

Intrusive rocks can become brecciated in appearance by multiple stages of intrusion, especially if fresh magma is intruded into partly consolidated or solidified magma. This may be seen in many granite intrusions where later aplite veins form a late-stage stockwork through earlier phases of the granite mass. When particularly intense, the rock may appear as a chaotic breccia.

Clastic rocks in mafic and ultramafic intrusions are known and form via several processes:

Impact breccias are thought to be diagnostic of an impact event such as an asteroid or comet striking the earth, and are usually found at impact craters.

Impact breccia, a type of impactite, forms during the process of impact cratering when large meteorites or comets impact with the Earth or other rocky planets or asteroids. Breccia of this type may be present on or beneath the floor of the crater, in the rim, or in the ejecta expelled beyond the crater. Impact breccia may be identified by its occurrence in or around a known impact crater, and/or an association with other products of impact cratering such as shatter cones, impact glass, shocked minerals, and chemical and isotopic evidence of contamination with extraterrestrial material (e.g. iridium and osmium anomalies).

Hydrothermal breccias usually form at shallow crustal levels (less than one km) between 150 to 350oC, when seismic activity (an earthquake) causes a void to open along a fault deep underground. The void draws in hot water and as pressure in the cavity drops, the water violently boils—akin to an underground geyser. In addition, the sudden opening of a cavity causes rock at sides of the fault to destabilize and implode inwards, the broken rock gets caught up in a churning mixture of rock, steam and boiling water. Rock fragments hit each other and sides of the fault, and attrition quickly rounds angular breccia fragments. Volatile gases are lost to the steam phase as boiling continues, in particular CO2. As a result, the chemistry of the fluids change and ore minerals rapidly precipitate. Epithermal deposits are mined for copper, silver and gold.

In the mesothermal regime, at much greater depths, over pressured fluids under lithostaic pressure can be released during seismic activity associated with mountain building. The pressurised fluids ascend towards shallower crustal levels that are under lower hydrostatic pressure. On their journey, high-pressure fluids crack rock by hydrofracturing, forming an angular jigsaw breccia. Rounding of rock fragments less common in the mesothermal regime, as the formational event is brief. If boiling occurs, methane and hydrogen sulfide may be lost to the steam phase and ore may precipitate. Mesothermal deposits are often mined for gold.

The striking visual appearance of breccias has for millennia made them a popular sculptural and architectural material. Breccia was used on a limited scale by the ancient Egyptians—one of the best-known examples is the statue of the goddess Tawaret in the British Museum. It was regarded by the Romans as an especially precious stone and was often used in high-profile public buildings. Many types of marble are brecciated, such as Breccia Oniciata or Breche Nouvelle.

It is most often used as an ornamental or facing material in walls and columns. A particularly striking example can be seen in the Pantheon in Rome, which features two gigantic columns of pavonazzetto, a breccia coming from Phrygia (in modern Turkey). Pavonazzetto obtains its name from its extremely colorful appearance, which is reminiscent of a peacock's feathers (pavone means "peacock" in Italian).