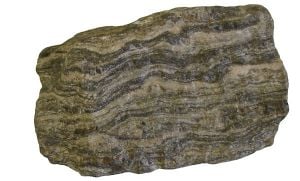 Gneiss is a widely distributed type of metamorphic rock. It is coarser than schist and has a distinct pattern of bands. Its mineral content is mainly feldspar. Quartz, micas (such as muscovite and biotite), and hornblende are also often present. The term gneissose is used to describe rocks with properties similar to gneiss.

The study of gneiss has helped scientists understand the geological processes by which this metamorphic rock can be formed. Also, using a radiometric dating technique, researchers have identified the Acasta Gneiss (in Northwest Territories, Canada) as the oldest known crustal rock outcrop in the world.

The word "gneiss" is from an old Saxon mining term that seems to have meant decayed, rotten, or possibly worthless material.

Gneiss is formed by high-grade regional metamorphic processes from formations that were formerly either igneous or sedimentary rocks. Gneissic rocks usually have medium to coarse foliation (aligned by directed pressure) and are largely recrystallized. They do not, however, carry large quantities of platy minerals such as micas or chlorites.

Gneiss resembles granite, except that the minerals are arranged into bands. Sometimes it is difficult to tell the difference between gneiss and a schist because some gneiss appears to have more mica than it really does. This is especially true with mica-rich parting planes. If a rock shows minerals occurring in distinct bands, it is probably gneiss. 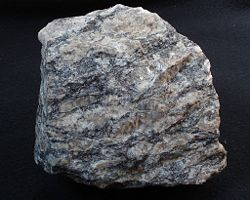 Augen gneiss (from the German augen, meaning "eyes") is a coarse-grained gneiss, interpreted as resulting from metamorphism of granite. It contains characteristic elliptic or lenticular shear-bound feldspar porphyroclasts within the layering of bands of quartz, biotite, and magnetite.

The Acasta Gneiss is named for the nearby Acasta River east of Great Slave Lake some 350 kilometers (km) north of Yellowknife, Northwest Territories, Canada. It lies in a remote area of the Tlicho land settlement. The rock exposed in the outcrop formed just over four billion (4 x 109) years ago—an age calculated by radiometric dating of zircon crystals (Bowring and Williams, 1999). Based on this estimate, it is the oldest known rock in the world. In geological terms, it is an Archaean tonalite gneiss.

In 2003, a team from the Smithsonian Institute collected a four-tonne boulder of Acasta Gneiss for display outside the National Museum of the American Indian in Washington, DC.