Garnet is a group of minerals that have been used since the Bronze Age as gemstones and abrasives. Garnets are most often seen in red, but are available in a wide variety of colors spanning the entire spectrum. The name "garnet" comes from the Latin granatus ("grain"), possibly a reference to the Punica granatum ("pomegranate"), a plant with red seeds similar in shape, size, and color to some garnet crystals.

Pure crystals of garnet are used as gemstones. In addition, garnet sand is a good abrasive and may be used to replace silica in sand blasting. Very high pressure streams of garnet sand mixed into water (Water jets) are used to cut steel and other materials. Garnet is also a key mineral in interpreting the origins of many igneous and metamorphic rocks.

Garnets are found in many colors including red, orange, yellow, green, blue, purple, brown, black, pink and colorless. The rarest of these is the blue garnet, discovered in the late 1990s in Bekily, Madagascar. It is also found in parts of the United States, Russia and Turkey. It changes color from blue-green in the daylight to purple in incandescent light, as a result of the relatively high amounts of vanadium (about 1 wt.% V2O3). Other varieties of color-changing garnets exist. In daylight, their color ranges from shades of green, beige, brown, gray, and blue, but in incandescent light, they appear a reddish or purplish/pink color. Because of their color changing quality, this kind of garnet is often mistaken for Alexandrite.

Garnet’s light transmission properties can range from the gemstone-quality transparent specimens to the opaque varieties used for industrial purposes as abrasives. The mineral’s luster is categorized as vitreous (glass-like) or resinous (amber-like). 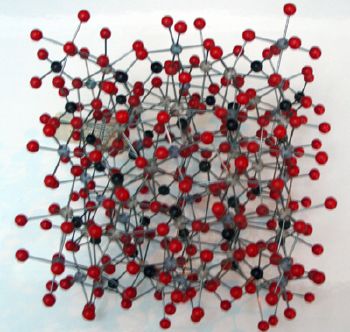 Garnets are nesosilicates having the general formula X3Y2(SiO4)3. The X site is usually occupied by divalent cations (Ca2+, Mg2+, Fe2+) and the Y site by trivalent cations (Al3+, Fe3+, Cr3+) in an octahedral/tetrahedral framework with [SiO4]4− providing the tetrahedra.[2] Garnets are most often found in the dodecahedral crystal habit, but are also commonly found in the trapezohedron habit.[3] They crystallize in the isometric system, having three axes, all of equal length and perpendicular to one another. Garnets do not show cleavage, so when they fracture under stress, sharp irregular pieces are formed.

Because the chemical composition of garnet varies, the atomic bonds in some varieties are stronger than in others. As a result, the mineral shows a range of hardness on the Mohs Scale of about 6.5 to 7.5. The harder varieties, like almandite, are often used for abrasive purposes.

Six common varieties of garnet are recognized based on their chemical composition. They are pyrope, almandine, spessartite, grossular (varieties of which are hessonite or cinnamon-stone and tsavorite), uvarovite and andradite. The garnets make up two solid solution series: pyrope-almandine-spessarite and uvarovite-grossular-andradite. 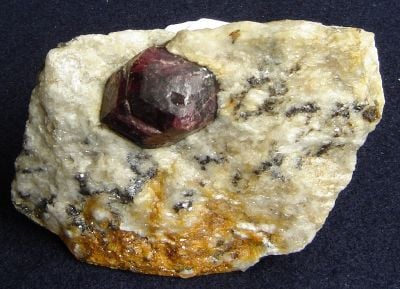 Almandite, sometimes called almandine, is the modern gem known as carbuncle (though originally almost any red gemstone was known by this name). The term "carbuncle" is derived from the Latin meaning "little spark." The name Almandite is a corruption of Alabanda, a region in Asia Minor where these stones were cut in ancient times. Chemically, almandite is an iron-aluminum garnet with the formula Fe3Al2(SiO4)3; the deep red transparent stones are often called precious garnet and are used as gemstones (being the most common of the gem garnets). Almandite occurs in metamorphic rocks like mica schists, associated with minerals such as staurolite, kyanite, andalusite, and others. Almandite has nicknames of Oriental garnet, almandine ruby, and carbuncle.

Pyrope, from the Latin pyropos, means similar to fire. It is red in color and chemically a magnesium aluminum silicate with the formula Mg3Al2(SiO4)3, though the magnesium can be replaced in part by calcium and ferrous iron. The color of pyrope varies from deep red to almost black. Transparent pyropes are used as gemstones.

A variety of pyrope from Macon County, North Carolina is a violet-red shade and has been called rhodolite, from the Greek meaning "a rose." In chemical composition it may be considered as essentially an isomorphous mixture of pyrope and almandite, in the proportion of two parts pyrope to one part almandite. Pyrope has tradenames some of which are misnomers; Cape ruby, Arizona ruby, California ruby, Rocky Mountain ruby, and Bohemian garnet from the Czech Republic. Another intriguing find is the blue color-change garnets from Madagascar, a pyrope spessartine mix. The color of these blue garnets is not like sapphire blue in subdued daylight but more reminiscent of the grayish blues and greenish blues sometimes seen in spinel However in white LED light the color is equal to the best corn flower blue sapphire or D block tanzanite this is due to the blue garnets ability to absorb the yellow component of the emitted light.

Pyrope is an indicator mineral for high pressure rocks. The garnets from mantle derived rocks, peridotites and eclogites, commonly contain a pyrope variety. 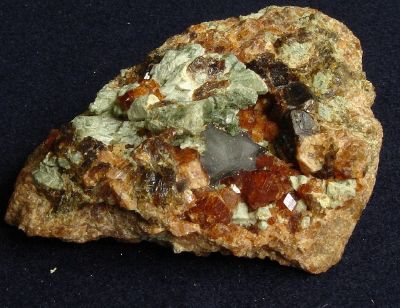 Spessartite or spessartine is manganese aluminum garnet, Mn3Al2(SiO4)3. Its name is derived from Spessart in Bavaria. It occurs most often in granite pegmatite and allied rock types and in certain low grade metamorphic phyllites. Spessartite of a beautiful orange-yellow is found in Madagascar (see Mandarin garnet). Violet-red spessartites are found in rhyolites in Colorado and Maine.

Andradite is a calcium-iron garnet, Ca3Fe2(SiO4)3, is of variable composition and may be red, yellow, brown, green or black. The recognized subvarieties are topazolite (yellow or green), demantoid (green) and melantite (black). Andradite is found both in deep-seated igneous rocks like syenite as well as serpentines, schists, and crystalline limestone. Demantoid has been called the "emerald of the Urals" from its occurrence there, and is one of the most prized of garnet varieties. Topazolite is a golden yellow variety and melanite is a black variety. 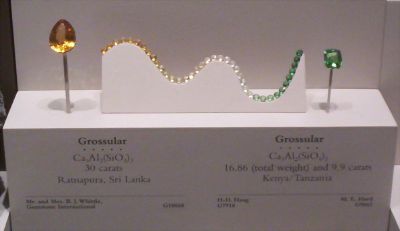 Grossular on display at the National Museum of Natural History

Grossular is a calcium-aluminum garnet with the formula Ca3Al2(SiO4)3, though the calcium may in part be replaced by ferrous iron and the aluminum by ferric iron. The name grossular is derived from the botanical name for the gooseberry, grossularia, in reference to the green garnet of this composition that is found in Siberia. Other shades include cinnamon brown (cinnamon stone variety), red, and yellow. Because of its inferior hardness to zircon, which the yellow crystals resemble, they have also been called hessonite from the Greek meaning inferior. Grossular is found in contact metamorphosed limestones with vesuvianite, diopside, wollastonite and wernerite.

One of the most sought after varieties of gem garnet is the fine green grossular garnet from Kenya and Tanzania called tsavorite. This garnet was discovered in the 1960s in the Tsavo area of Kenya, from which the gem takes its name.

Uvarovite is a calcium chromium garnet with the formula Ca3Cr2(SiO4)3. This is a rather rare garnet, bright green in color, usually found as small crystals associated with chromite in peridotite, serpentinite, and kimberlites. It is found in crystalline marbles and schists in the Ural Mountains of Russia and Outokumpu, Finland.

Knorringite is a magnesium chromium garnet species with the formula Mg3Cr2(SiO4)3. Pure end-member knorringite never occurs in nature. knorringite is only formed under high pressure and is often found in kimberlites. It is used as an indicator mineral in the search for diamonds.

In yttrium iron garnet (YIG), Y3Fe2(FeO4)3, the five iron(III) ions occupy two octahedral and three tetrahedral sites, with the yttrium(III) ions coordinated by eight oxygen ions in an irregular cube. The iron ions in the two coordination sites exhibit different spins, resulting in magnetic behavior. YIG is a ferromagnetic material having a Curie temperature of 550 K. By substituting specific sites with rare earth elements, for example, interesting magnetic properties can be obtained.

One example for this is gadolinium gallium garnet, Gd3Ga2(GaO4)3, which is synthesized for use in magnetic bubble memory.

Yttrium aluminium garnet (YAG), Y3Al2(AlO4)3, is used for synthetic gemstones. When doped with neodymium (Nd3+), these YAl-Garnets are useful as the lasing medium in lasers. 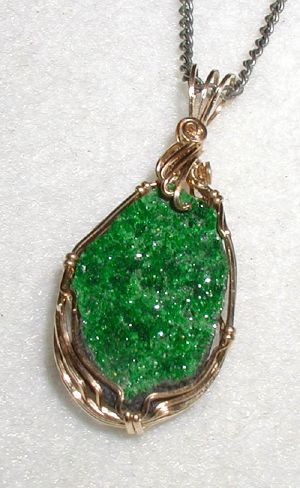 Pure crystals of garnet are used as gemstones. In particular, it is the birthstone for the month of January. Garnet sand is a good abrasive, and a common replacement for silica sand in sand blasting. Mixed with very high pressure water, garnet is used to cut steel and other materials in water jets.

Garnet is a key mineral in interpreting the genesis of many igneous and metamorphic rocks via geothermobarometry. Diffusion of elements is relatively slow in garnet compared to rates in many other minerals, and garnets are also relatively resistant to alteration. Hence, individual garnets commonly preserve compositional zonations that are used to interpret the temperature-time histories of the rocks in which they grew. Garnet grains that lack compositional zonation commonly are interpreted as having been homogenized by diffusion, and the inferred homogenization also has implications for the temperature-time history of the host rock.

Garnets are also useful in defining metamorphic facies of rocks. For instance, eclogite can be defined as a rock of basalt composition, but mainly consisting of garnet and omphacite. Pyrope-rich garnet is restricted to relatively high-pressure metamorphic rocks, such as those in the lower crust and in the Earth's mantle. Peridotite may contain plagioclase, or aluminum-rich spinel, or pyrope-rich garnet, and the presence of each of the three minerals defines a pressure-temperature range in which the mineral could equilibrate with olivine plus pyroxene: the three are listed in order of increasing pressure for stability of the peridotite mineral assemblage. Hence, garnet peridotite must have been formed at great depth in the earth. Xenoliths of garnet peridotite have been carried up from depths of 100 kilometers and greater by kimberlite, and garnets from such disaggregated xenoliths are used as a kimberlite indicator minerals in diamond prospecting. At depths of about 300 to 400 kilometers and greater, a pyroxene component is dissolved in garnet, by the substitution of (Mg,Fe) plus Si for 2Al in the octahedral (Y) site in the garnet structure, creating unusually silica-rich garnets that have solid solution towards majorite. Such silica-rich garnets have been identified as inclusions within diamonds.

Did you know?
In the United States, garnet is the birthstone for January and the state mineral of Connecticut

In the United States, it is known as the birthstone for January.[1] It has been made the state mineral of Connecticut.[4]