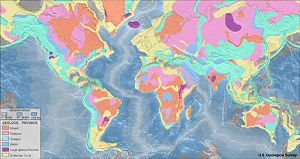 Geologic provinces of the world (USGS)

In geology, the term crust is used for the outermost solid shell of a planet or moon. It is chemically and mechanically different from underlying material. Crusts of the Earth, our Moon, Mercury, Venus, and Mars have been generated largely by igneous processes, and these crusts are richer in incompatible elements than the underlying mantles. Crusts are also present on moons of the outer planets and have formed by similar or analogous processes. For instance, Io, a moon of Jupiter, also has a crust formed by igneous processes.

Earth has the best characterized and perhaps the most complex crust of all the planets and moons in our solar system. It consists of two contrasting types: continental crust and oceanic crust. Despite the details known about Earth's crust, its early history is obscure. The rapidly growing base of knowledge about other bodies in the Solar System provides insights into the beginnings of Earth's history as well as into other possible pathways of planetary evolution. Studies of the Moon have been particularly valuable for understanding the early Earth.

Perspective from the Moon

The Moon provides an unusual opportunity to study how crust can first form, for at least these two reasons. First, ancient crust is well-preserved on the Moon because it has never had plate tectonics or an atmosphere or surface water. Second, there are many extremely well-characterized samples of the crust from known locations.

The limited summary below is intended for comparative purposes, and much of the content is based on an overview by Hiesinger and Head (2006)[1] and other papers in the same volume. (For more information, see Moon.)

Most of the Moon's crust is thought to have crystallized from magma formed as a consequence of intense meteorite bombardment in the early history of the Solar System. A particularly large meteorite is believed to have collided with the forming Earth, and part of the material ejected into space by the collision underwent accretion to form the Moon. As the Moon formed, the outer part of it is thought to have been molten, a "lunar magma ocean." Plagioclase feldspar crystallized in large amounts from this magma ocean and floated towards the surface. The cumulate rocks form much of the crust. The upper part of the crust probably averages about 88 percent plagioclase (near the lower limit of 90 percent defined for anorthosite): the lower part of the crust may contain a higher percent of ferromagnesian minerals such as the pyroxenes and olivine, but even that lower part probably averages about 78 percent plagioclase.[2] The underlying mantle is denser and olivine-rich.

The thickness of the crust ranges between about 20 and 120 kilometers (km). Crust on the far side of the moon averages about 12 km thicker than that on the near side. Estimates of average thickness fall in the range from about 50 to 60 km. Most of this plagioclase-rich crust formed shortly after formation of the moon, between about 4.5 and 4.3 billion years ago. Perhaps 10% or less of the crust consists of igneous rock added after formation of the initial plagioclase-rich material. The best-characterized and most voluminous of these later additions are the mare basalts formed between about 3.9 and 3.2 billion years ago. Minor volcanism continued after 3.2 billion years, perhaps as recently as 1 billion years ago. There is no evidence of crustal formation or deformation due to plate tectonics.

Study of the Moon has established that a crust can form on a rocky planetary body significantly smaller than Earth. Although the radius of the Moon is only about a quarter that of Earth, the lunar crust has a significantly greater average thickness. This relatively thick crust formed almost immediately after formation of the Moon. Magmatism continued after the period of intense meteorite impacts ended about 3.9 billion years ago, but igneous rocks younger than 3.9 billion years make up only a minor part of the crust. Earth cutaway from core to exosphere.

The crust of the Earth is composed of a great variety of igneous, metamorphic, and sedimentary rocks. The crust is underlain by the mantle. The upper part of the mantle is composed mostly of peridotite, a rock denser than rocks common in the overlying crust. The boundary between the crust and mantle is conventionally placed at the Mohorovičić discontinuity, a boundary defined by a contrast in seismic velocity. Earth's crust occupies less than one percent of Earth's volume.

The temperature of the crust increases with depth, reaching values typically in the range from about 500 °C (900 °F) to 1,000 °C (1,800 °F) at the boundary with the underlying mantle. The crust and underlying relatively rigid mantle make up the lithosphere. Because of convection in the underlying plastic, although non-molten, upper mantle and asthenosphere, the lithosphere is broken into tectonic plates that move. The temperature increases by as much as 30°C (about 50°F) for every kilometer locally in the upper part of the crust, but the geothermal gradient is less deeper in the crust.[4]

Partly by analogy to what is known about our Moon, Earth is considered to have differentiated from an aggregate of planetesimals into its core, mantle and crust within about 100 million years of the formation of the planet, 4.6 billion years ago. The primordial crust was very thin, and was likely recycled by much more vigorous plate tectonics and destroyed by significant asteroid impacts, which were much more common in the early stages of the solar system.

The Earth has likely always had some form of basaltic crust, but the age of the oldest oceanic crust today is only about 200 million years. In contrast, the bulk of the continental crust is much older. The oldest continental crustal rocks on Earth have ages in the range from about 3.7 to 4.28 billion years[5][6] and have been found in the Narryer Gneiss Terrane in Western Australia, in the Acasta Gneiss in the Northwest Territories on the Canadian Shield, and on other cratonic regions such as those on the Fennoscandian Shield. A few zircons with ages as great as 4.3 billion years have been found in the Narryer Gneiss Terrane.

The average age of the current Earth's continental crust has been estimated to be about 2.0 billion years.[7] Most crustal rocks formed before 2.5 billion years ago are located in cratons. Such old continental crust and the underlying mantle lithosphere are less dense than elsewhere in the Earth and so are not readily destroyed by subduction. Formation of new continental crust is linked to periods of intense orogeny or mountain building; these periods coincide with the formation of the supercontinents such as Rodinia, Pangaea and Gondwana. The crust forms in part by aggregation of island arcs including granite and metamorphic fold belts, and it is preserved in part by depletion of the underlying mantle to form buoyant lithospheric mantle.

Composition of the continental crust

The continental crust has an average composition similar to that of the igneous rock, andesite. The composition tabulated below and the following discussion are based largely on the summary by Rudnick and Gao (2003).[8] Continental crust is enriched in incompatible elements compared to the basaltic ocean crust and much enriched compared to the underlying mantle. Although the continental crust comprises only about 0.6 weight percent of the silicate Earth, it contains 20% to 70% of the incompatible elements. 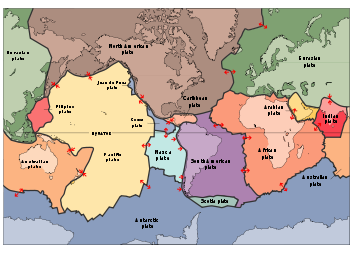 Plates in the crust of the earth, according to the plate tectonics theory

All the other constituents except water occur only in very small quantities, and total less than 1%. Estimates of average density for the upper crust range between 2.69 g/cm3 and 2.74 g/cm3 and for lower crust between 3.0 g/cm3 and 3.25 g/cm3[3].