Gadolinium (chemical symbol Gd, atomic number 64) is a silvery white metallic element and a member of the lanthanide series of chemical elements. It is considered one of the "rare earth metals."[1] Compounds containing gadolinium may be found in such technologies as microwave ovens, televisions, nuclear propulsion systems, magnetic resonance imaging (MRI), and positron emission tomography (PET.) 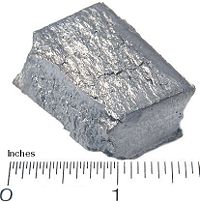 Gadolinium at a purity in excess of 99.9 percent

In nature, gadolinium is found not as the free element but in various minerals such as monazite and bastnäsite. It occurs in only trace amounts in the mineral gadolinite. Both gadolinium and gadolinite were named after the Finnish chemist and geologist Johan Gadolin.

Today, gadolinium is isolated by techniques such as ion exchange and solvent extraction, or by the reduction of its anhydrous fluoride with metallic calcium.

In 1880, Swiss chemist Jean Charles Galissard de Marignac examined samples of didymium and gadolinite by spectroscopy and observed the unique spectral lines produced by gadolinium. French chemist Paul Émile Lecoq de Boisbaudran separated gadolinia, the oxide of gadolinium, from Mosander's yttria in 1886. The element itself was isolated only recently.[2]

Gadolinium is an inner transition metal (or lanthanide) that lies in period 6 of the periodic table, between europium and terbium. It is malleable and ductile. Unlike other rare earth elements, gadolinium is relatively stable in dry air; however, it tarnishes quickly in moist air and forms a loosely adhering oxide that spalls off and exposes more surface to oxidation. Gadolinium reacts slowly with water and is soluble in dilute acid.

Gadolinium has the highest thermal neutron capture cross-section of any (known) element (about 49,000 barns), but it also has a fast burn-out rate, limiting its usefulness as a material for nuclear control rods.

Compounds of gadolinium include:

Gadolinium is used in nuclear marine propulsion systems as a burnable poison. The gadolinium slows the initial reaction rate, but as it decays other neutron poisons accumulate, allowing for long-running cores. Gadolinium is also used as a secondary, emergency shut-down measure in some nuclear reactors, particularly of the CANDU type.

Gadolinium also possesses unusual metallurgic properties, with as little as one percent of gadolinium improving the workability and resistance of iron, chromium and related alloys to high temperatures and oxidation.

Because of their paramagnetic properties, solutions of organic gadolinium complexes and gadolinium compounds are used as intravenous radiocontrast agents to enhance images in medical magnetic resonance imaging (MRI). Magnevist is the most widespread example.

Gadolinium gallium garnet (Gd3Ga5O12) is a material with good optical properties. It is used in the fabrication of various optical components and as a substrate for magneto–optical films.

In the future, gadolinium ethyl sulfate, which has extremely low noise characteristics, may be used in masers. Furthermore, gadolinium's high magnetic moment and low Curie temperature (which lies at room temperature) suggest applications as a magnetic component for sensing heat and cold.

Due the extremely high neutron cross-section of gadolinium, this element is very effective for use with neutron radiography.

Gadolinium has no known biological role. As in the case of the other lanthanides, gadolinium compounds have low-to-moderate toxicity, but their toxicity has not been investigated in detail. In the case of patients on dialysis, some data suggest that it may cause nephrogenic systemic fibrosis, formerly known as nephrogenic dermopathy.[4]