Germanium (chemical symbol Ge, atomic number 32) is a lustrous, hard, grayish-white chemical element. It is classified as a metalloid—that is, its chemical properties are intermediate between those of metals and nonmetals. It is a valuable semiconductor material.

The development of the germanium transistor opened the door to numerous applications in solid-state electronics. Currently, germanium and its compounds are mainly used for fiber-optic communications networks and infrared night vision systems. In addition, germanium is a catalyst for certain polymerization reactions, and single-crystal detectors made with highly purified germanium can be used to identify sources of radiation. Germanium dioxide is useful for wide-angle camera lenses and microscope objective lenses, and silicon germanide is becoming an important semiconductor for high-speed integrated circuits.

Germanium (Latin Germania, for Germany) is found in argyrodite (sulfide of germanium and silver), coal, germanite, zinc ores, and other minerals.

Germanium is obtained commercially from the smelter dust of zinc ore processing and the combustion byproducts of certain coals. A large reserve of this element is found in coal sources.

This metalloid can be extracted from associated metals by fractional distillation of its volatile tetrachloride. This technique permits the production of ultra-high-purity germanium.

Dmitri Mendeleev predicted the existence of germanium (as well as other unidentified elements) in 1871. Thinking of it as a missing member of the silicon group, he called it ekasilicon. When the element was discovered by Clemens Winkler in 1886, it served as an important confirmation of Mendeleev's idea of element periodicity.

The development of the germanium transistor opened the door to countless applications in solid state electronics. From 1950 through the early 1970s, this area provided an increasing market for germanium, but then high-purity silicon began replacing germanium in transistors, diodes, and rectifiers. Silicon has superior electrical properties but requires much higher purity samples—a purity that could not be commercially achieved in the early days. Meanwhile, the demand for germanium increased dramatically for other applications—fiber optics communication networks, infrared night vision systems, and polymerization catalysts.

In the periodic table, germanium is located in group 14 (former group 4A), between silicon and tin, and in period 4, between gallium and arsenic. Like silicon and arsenic, it is a metalloid. 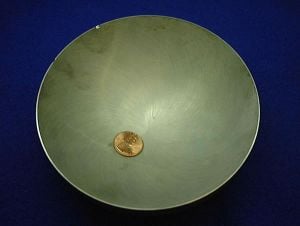 In its pure state, germanium is crystalline and brittle, and it retains its luster in air at room temperature. In terms of its atomic arrangement, it has the same crystal structure as diamond.

Germanium is a semiconductor, with electrical properties between those of a metal and an insulator. Unlike most semiconductors, it has a narrow band gap, allowing it to respond efficiently to infrared light. Zone refining techniques have enabled the production of extremely pure, crystalline germanium for semiconductors (with an impurity level of only one part in 1010).

The isotopes of germanium range in atomic mass number from 58 to 89. Of these, there are four stable isotopes: 70Ge, 72Ge, 73Ge, and 74Ge. In addition, 76Ge has been found to have an extremely long half-life, so that for all practical purposes it may be considered stable. The other radioisotopes are very short-lived.

Germanium has been called an attractive nutritional supplement, able to cure diseases such as cancer and AIDS. As noted above, some germanium compounds are toxic for bacteria but have low toxicity toward mammals. Yet, a 1997 study sponsored by the U.S. Food and Drug Administration concluded that nutritional supplements containing germanium "present potential human health hazard."[4]