Argon (chemical symbol Ar, atomic number 18) is a member of the noble gas family of elements. It is present in the Earth's atmosphere at slightly under one percent (by volume), making it the most common noble gas on Earth.

The inertness of argon is a very useful property for a number of applications. For instance, it helps protect filaments in incandescent lightbulbs, it provides an inert shield for various forms of welding and during the production of reactive elements, and it offers a protective cover when growing silicon and germanium crystals. As this gas is a poor conductor of heat, it is useful for thermal insulation in energy-efficient windows and for inflating scuba diving suits. Blue argon lasers are used in surgery to weld arteries, destroy tumors, and correct eye defects. The isotope argon-39 has been used for groundwater dating and ice coring.

Argon constitutes 0.934 percent by volume and 1.29 percent by mass of the Earth's atmosphere, and air is the primary raw material used by industry to produce purified argon products. Argon is usually isolated by the technique of fractional distillation of liquefied air. This process also produces purified nitrogen, oxygen, neon, krypton, and xenon.

By contrast, the Martian atmosphere contains 1.6 percent of argon-40 and five ppm of argon-36. In 1973, the Mariner spaceprobe fly-by of the planet Mercury found that Mercury has a very thin atmosphere containing 70 percent argon, believed to result from releases of the gas as a decay product from radioactive materials on the planet. In 2005, the Huygens probe also discovered the presence of argon-40 on Titan, the largest moon of Saturn.[1]

Argon (from the Greek word αργός, meaning "inactive") was suspected to be present in air by Henry Cavendish in 1785. It was not discovered, however, until 1894, when Lord Rayleigh and Sir William Ramsay performed an experiment in which they removed all the oxygen and nitrogen from a sample of air. Argon was also encountered in 1882, by the independent research of H.F. Newall and W.N. Hartley. Each investigator observed new lines in the color spectrum of air, but they were unable to identify the element responsible for the lines. Argon became the first member of the noble gases to be discovered.

Argon, an extremely unreactive element, is a member of the noble gas series in the periodic table. It is situated between neon and krypton in group 18 (former group 8A), and is placed after chlorine in period three.

Argon is colorless and odorless in both its liquid and gaseous forms. It is inert under most conditions and forms no confirmed stable compounds at room temperature. The creation of argon hydrofluoride (HArF)—a metastable compound of argon with fluorine and hydrogen—was first reported by researchers at the University of Helsinki in 2000 (see Compounds below).

This element can also form "clathrates" (cage-like molecules) with water, when its atoms are trapped in a lattice of water molecules. Also, argon-containing ions (such as ArH+) and excited state complexes (such as ArF) are well-known. Theoretical calculations (by computer) have shown several argon compounds that should be stable but for which no synthesis routes are currently known.

In the Earth's atmosphere, 39Ar is made by cosmic ray activity, primarily with 40Ar. In the subsurface environment, argon is also produced through neutron capture by 39K or alpha emission by calcium. 37Ar is created from the decay of 40Ca as a result of subsurface nuclear explosions. It has a half-life of 35 days.

The extreme inertness of argon and other noble gases is attributed to the electronic structure of their atoms. The atom of each of these elements has a set of eight electrons (an "octet") in its outermost shell, which gives the atom stability and makes it resistant to bonding with other elements.

Before 1962, the noble gases were considered to be entirely unable to form any compounds. Since then, however, compounds of the heavier noble gases have been synthesized. In 2000, the first argon compounds were formed by researchers at the University of Helsinki. By shining ultraviolet light onto frozen argon containing a small amount of hydrogen fluoride, argon hydrofluoride (HArF) was formed.[3] It was found to be stable up to a temperature of 40 kelvin. 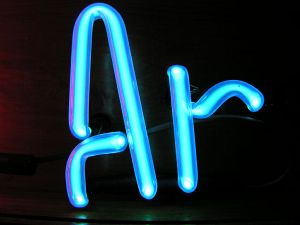 An argon-filled discharge tube glows brightly when an electric current is passed through it.