Xenon (chemical symbol Xe, atomic number 54) is a colorless, odorless, heavy noble gas that occurs in the Earth's atmosphere in trace amounts. It was the first noble gas from which a compound was synthesized successfully, and many xenon compounds have been made by now.[1] [2] Xenon flash lamps are widely used in flash photography, and xenon arc lamps are used in solar simulators and automotive high-intensity discharge (HID) headlights. In addition, xenon is the preferred fuel for ion propulsion, and it is used in bubble chambers in nuclear power plants. It is commonly used to analyze protein structures by crystallography, and some of its salts (called perxenates) are used as oxidizing agents in analytical chemistry.

Xenon is a trace gas in the Earth's atmosphere, occurring in one part in twenty million. In addition, it is found in gases emitted from some mineral springs.

This element can be extracted by fractional distillation of liquid air or by selective adsorption (surface binding) on activated carbon. The isotopes Xe-133 and Xe-135 are synthesized by neutron irradiation within air-cooled nuclear reactors.

Xenon (from the Greek word ξένος, meaning "strange") was discovered in England by William Ramsay and Morris Travers on July 12, 1898, shortly after they had discovered the elements krypton and neon. They found it in the residue left over from evaporating components of liquid air.

Xenon is a member of the noble gas series in the periodic table. It is situated between krypton and radon in group 18 (former group 8A), and is placed after iodine in period 5.

As the noble gases are chemically very inert, they are said to have a chemical valence of zero. Nonetheless, the term "inert" is not an entirely accurate description of this group of elements, because some of them—including xenon—have been shown to form compounds (see Compounds below).

In a gas-filled tube, xenon emits a blue glow when the gas is excited by electrical discharge. Using tens of gigapascals of pressure, xenon has been forced into a metallic phase.[3] Xenon can also form "clathrates" (cage-like molecules) with water, when xenon atoms are trapped in a lattice of water molecules.

Naturally occurring xenon is made of seven stable and two slightly radioactive isotopes. Twenty additional unstable isotopes have been studied. Xe-129 is produced by the beta decay of iodine-129 (half-life 16 million years); Xe-131m, Xe-133, Xe-133m, and Xe-135 are some of the nuclear fission products of both uranium-235 and plutonium-239, and therefore used as indicators of nuclear explosions.

The artificial isotope Xe-135 is of considerable significance in the operation of nuclear fission reactors. Xe-135 acts as a neutron absorber (or "poison") that can slow or stop the chain reaction after a period of operation. This was discovered in the earliest nuclear reactors built by the American Manhattan Project for plutonium production, but the designers had made provisions to circumvent this problem.

Relatively high concentrations of radioactive xenon isotopes have been found to emanate from nuclear reactors, because this fission gas is released from cracked fuel rods or fissioning of uranium in cooling water. The concentrations of these isotopes are still usually low compared to naturally occurring radioactive noble gases such as radon-222.

Given that xenon is a tracer for two parent isotopes, xenon isotope ratios in meteorites are a powerful tool for studying the formation of the Solar System. The I-Xe method of dating gives the time elapsed between nucleosynthesis and the condensation of a solid object from the solar nebula. Xenon isotopes are also a powerful tool for understanding the formation of the Earth. Excess Xe-129 found in carbon dioxide well gases from New Mexico was believed to be from the decay of mantle-derived gases soon after the Earth's formation.[4]

Recently, researchers (M. Räsänen at al.) at the University of Helsinki in Finland made xenon dihydride (HXeH), xenon hydride-hydroxide (HXeOH), and hydroxenoacetylene (HXeCCH). These compounds are stable up to 40K.[5] 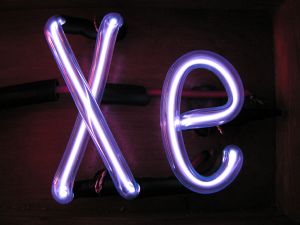 Xenon gas can be safely stored in normal sealed glass containers at standard temperature and pressure. Xenon is nontoxic, but many of its compounds are toxic on account of their strong oxidative properties.

As xenon is denser than air, the speed of sound in xenon is slower than that in air. When inhaled, it lowers the resonant frequencies of the vocal tract, producing a characteristic lowered voice pitch (this is the opposite of the high-pitched voice caused by inhalation of helium.) Like helium, xenon does not satisfy the body's need for oxygen and is a simple asphyxiant. Consequently, many universities no longer allow the voice stunt as a general chemistry demonstration. As xenon is expensive, the gas sulfur hexafluoride, which is similar to xenon in molecular weight (146 vs. 131), is generally used in this stunt, although it too is an asphyxiant.

There is a myth that xenon is too heavy for the lungs to expel unassisted, and that after inhaling xenon, it is necessary to bend over completely at the waist to allow the excess gas to "spill" out of the body. In fact, the lungs mix gases very effectively and rapidly, such that xenon would be purged from the lungs within a breath or two. There is, however, a danger associated with any heavy gas in large quantities: it may sit invisibly in an unventilated space, and a person who enters the space may breathe it unknowingly. Xenon is rarely used in large enough quantities for this to be a concern, but the potential for danger exists any time a tank or container of xenon is kept in an unventilated space.