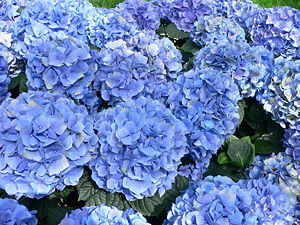 In acidic soils, the blossoms of Hydrangea macrophylla are blue; in alkaline soils, the flowers are pink.

The word "acid" comes from the Latin acidus meaning "sour." In chemistry, however, the term acid has a more specific meaning.

An acid (often represented by the generic formula HA) is any substance that in solution tastes sour, produces a prickling or burning feeling on contact with the skin, changes the color of indicators (e.g. reddens blue litmus paper), reacts with some metals to liberate hydrogen, reacts with bases to form salt and water, promotes certain chemical reactions (e.g. A chemical reaction accelerated by the addition of an acid; the acid itself not being consumed in the reaction, called acid catalysis), and gives a solution with a pH of less than 7.0.

Acids and bases complement each other. When combined, they neutralize each other to form salts. Acids and bases and the reactions between them exemplify the ubiquitousness of complementary pairs in the natural world—plus and minus, male and female (the "yang" and "yin" of oriental philosophy)—whose interactions produce the dynamism and multiform existences populating the universe.

Acids are essential for life, and many occur naturally. For example, our stomach produces hydrochloric acid (HCl) to help digestion. Acids are also widely used in industries and are in a large number of foods and beverages. However, many acids are poisonous, and can cause severe burns.

Examples of acids include the inorganic substances, also known as mineral acids—compounds composed of hydrogen and a nonmetal element or radical that does not contain carbon atoms.(e.g. sulfuric, hydrochloric, nitric, and phosphoric acids)—and the organic acids which are present in most fruits and other foods (e.g. citric acid in lemons, oranges, and grapefruits; malic acid, in apples; lactic acid, in sour-milk products; and acetic acid, in vinegar).

Acids and bases form complementary pairs, so their definitions need to be considered together. There are three common groups of definitons: the Arrhenius, the Brønsted-Lowry and the Lewis definitions, in order of increasing generality.

The Brønsted-Lowry definition, although not the most general one, is the most widely used definition. The strength of an acid may be understood using this definition by the stability of hydronium and the solvated conjugate base upon dissociation. Increasing stability of the conjugate base will increase the acidity of a compound. This concept of acidity is used frequently for organic acids such as acetic acid. The molecular orbital description, where the unfilled proton orbital overlaps with a lone pair, is connected to the Lewis definition.

Solutions of weak acids and salts of their conjugate bases form buffer solutions, that is a solution of a weak acid and its conjugate base that resist change in pH.

Acid/base systems are different from redox (oxidation-reduction) reactions in that there is no change in oxidation state.

Generally, acids have the following properties:

Acids are named according to their anions. That ionic suffix is dropped and replaced with a new suffix (and sometimes prefix), according to the table below. For example, HCl has chloride as its anion, so the -ide suffix makes it take the form hydrochloric acid.

In water, the following equilibrium occurs between an acid (HA) and the water, which acts as a base:

The acidity constant (or acid dissociation constant) is the equilibrium constant that indicates the degree to which hydrogen ions dissociate from an acid.

Strong acids are those that almost completely dissociate in water. They have large Ka values; hence, the acid dissociation equilibrium lies 100% to the right, which means that there are mostly H3O+ and A- ions in solution with a very minute amount of undissociated HA molecules.

Weak acids are those that partially dissociate in water. They have small Ka values; therefore, only a small percent of protons are donated to water, keeping the acid dissociation equilibrium to the left. The solution mainly contains undissociated HA molecules with very little H3O+ and A- ions. Common weak acids are nitrous acid (HNO2), hydrofluoric acid (HF), and acetic acid (CH3CO2H). For example, the Ka value for acetic acid is 1.8 x 10-5.

A monoprotic acid can undergo one dissociation (sometimes called ionization) as follows and simply has one acid dissociation constant as shown above:

A diprotic acid (here symbolized by H2A) can undergo one or two dissociations depending on the pH. Each dissociation has its own dissociation constant, Ka1 and Ka2.

The first dissociation constant is typically greater than the second; i.e., Ka1 > Ka2 . For example, sulfuric acid (H2SO4) can donate one proton to form the bisulfate anion (HSO4−), for which Ka1 is very large; then it can donate a second proton to form the sulfate anion (SO42−), wherein the Ka2 is intermediate strength. The large Ka1 for the first dissociation makes sulfuric a strong acid. In a similar manner, the weak unstable carbonic acid (H2CO3) can lose one proton to form bicarbonate anion (HCO3−) and lose a second to form carbonate anion (CO32−). Both Ka values are small, but Ka1 > Ka2 .

An inorganic example of a triprotic acid is orthophosphoric acid (H3PO4), usually just called phosphoric acid. All three protons can be successively lost to yield H2PO4−, then HPO42−, and finally PO43− , the orthophosphate ion, usually just called phosphate. An organic example of a triprotic acid is citric acid, which can successively lose three protons to finally form the citrate ion. Even though the positions of the protons on the original molecule may be equivalent, the successive Ka values will differ since it is energetically less favorable to lose a proton if the conjugate base is more negatively charged.

Neutralization is the reaction between an acid and a base, producing a salt and water; for example, hydrochloric acid and sodium hydroxide form sodium chloride and water:

Neutralization is the basis of titration, where a pH indicator shows an equivalence point when the same number of moles of a base have been added to an acid.

Acidification of the environment

Acidification is the process whereby a compound is added to a solution, leading to a drop in the pH of the solution. One example is when the pollution of air—mainly sulfur dioxide and nitrogen oxides—is converted into acidic substances.

This "acid rain" is best known for the damage it causes to forests and lakes. It also damages freshwater and coastal ecosystems, soils, and even ancient historical monuments.

Sulfur dioxide and the nitrogen oxides are mainly emitted by burning fossil fuels. The 1990s saw these emissions drop substantially, thanks to a combination of European Directives forcing the installation of desulfurisation systems, the move away from coal as a fossil fuel, and major economic restructuring in the new German Lander.

Acidification is nevertheless still a major environmental problem in Europe. It is a cross-border issue, requiring coordinated initiatives across countries and sectors. This section brings together the EEA’s reports on the scale of the problem and the effectiveness of the solutions tried to date.[1]