Illustration of a redox reaction.

Redox (shorthand for reduction/oxidation reaction) describes all chemical reactions in which atoms have their oxidation number (oxidation state) changed.

The term redox comes from the two concepts of reduction and oxidation. It can be explained in simple terms:

Non-redox reactions, which do not involve changes in formal charge, are known as metathesis reactions. 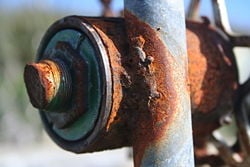 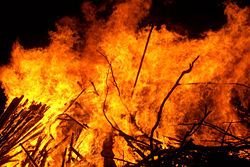 Substances that have the ability to oxidize other substances are said to be oxidative and are known as oxidizing agents, oxidants or oxidizers. Put in another way, the oxidant removes electrons from another substance, and is thus reduced itself. And because it "accepts" electrons it is also called an electron acceptor. Oxidants are usually chemical substances with elements in high oxidation numbers (e.g., H2O2, MnO4-, CrO3, Cr2O72-, OsO4) or highly electronegative substances that can gain one or two extra electrons by oxidizing a substance (O, F, Cl, Br).

Substances that have the ability to reduce other substances are said to be reductive and are known as reducing agents, reductants, or reducers. Put in another way, the reductant transfers electrons to another substance, and is thus oxidized itself. And because it "donates" electrons it is also called an electron donor. Reductants in chemistry are very diverse. Metal reduction, electropositive elemental metals can be used (Li, Na, Mg, Fe, Zn, Al). These metals donate or give away electrons readily. Other kinds of reductants are hydride transfer reagents (NaBH4, LiAlH4), these reagents are widely used in organic chemistry,[1][2] primarily in the reduction of carbonyl compounds to alcohols. Another useful method is reductions involving hydrogen gas (H2) with a palladium, platinum, or nickel catalyst. These catalytic reductions are primarily used in the reduction of carbon-carbon double or triple bonds.

Light and heat speed up the movement of molecules and that therefore increases the speed at which electrons are lost by molecules, atoms or ions(oxidation).

Oxidation is used in a wide variety of industries such as in the production of cleaning products.

Redox reactions are the foundation of electrochemical cells.

A good example is the reaction between hydrogen and fluorine:

We can write this overall reaction as two half-reactions: the oxidation reaction

and the reduction reaction:

Analysing each half-reaction in isolation can often make the overall chemical process clearer. Because there is no net change in charge during a redox reaction, the number of electrons in excess in the oxidation reaction must equal the number consumed by the reduction reaction (as shown above).

When adding the reactions together the electrons cancel:

And the ions combine to form hydrogen fluoride:

overall equation for the above:

Much biological energy is stored and released by means of redox reactions. Photosynthesis involves the reduction of carbon dioxide into sugars and the oxidation of water into molecular oxygen. The reverse reaction, respiration, oxidizes sugars to produce carbon dioxide and water. As intermediate steps, the reduced carbon compounds are used to reduce nicotinamide adenine dinucleotide (NAD+), which then contributes to the creation of a proton gradient, which drives the synthesis of adenosine triphosphate (ATP) and is maintained by the reduction of oxygen. In animal cells, mitochondria perform similar functions. (See Membrane potential article.)

The term redox state is often used to describe the balance of NAD+/NADH and NADP+/NADPH in a biological system such as a cell or organ. The redox state is reflected in the balance of several sets of metabolites (e.g., lactate and pyruvate, beta-hydroxybutyrate and acetoacetate) whose interconversion is dependent on these ratios. An abnormal redox state can develop in a variety of deleterious situations, such as hypoxia, shock, and sepsis. Redox signaling involves the control of cellular processes by redox processes.

A wide variety of aromatic compounds are enzymatically reduced to form free radicals that contain one more electron than their parent compounds. In general, the electron donor is any of a wide variety of flavoenzymes and their coenzymes. Once formed, these anion free radicals reduce molecular oxygen to superoxide and regenerate the unchanged parent compound. The net reaction is the oxidation of the flavoenzyme's coenzymes and the reduction of molecular oxygen to form superoxide. This catalytic behavior has been described as futile cycle or redox cycling.

Examples of redox cycling-inducing molecules are the herbicide paraquat and other viologens and quinones such as menadione.

Retrieved from https://www.newworldencyclopedia.org/p/index.php?title=Redox&oldid=1090942
Categories:
Hidden category:
This page was last edited on 8 December 2022, at 02:49.
Content is available under Creative Commons Attribution/Share-Alike License; additional terms may apply. See Terms of Use for details.