In chemistry, hydroxide is the most common name for the diatomic anion OH−, consisting of oxygen and hydrogen atoms. It is one of the simplest diatomic ions known. The term "hydroxide" also refers to the class of compounds that contain the hydroxide ion. Common examples are sodium hydroxide, potassium hydroxide, and ammonium hydroxide. 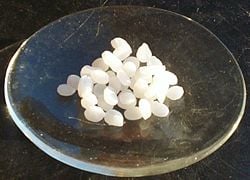 Hydroxide compounds and ions are relatively common in nature. Several mineral ores, such as bauxite and limonite, are hydroxides. In addition, hydroxides are widely used in human activities. For example, sodium hydroxide (lye) is useful as a strong base in industry, and potassium hydroxide is used in agriculture.

Hydroxide as a base

Most compounds containing the hydroxide ion are chemical bases. Thus, hydroxide ions are involved in numerous acid-base reactions, including the reaction known as neutralization.

A substance that produces hydroxide ions when dissolved in aqueous solution is called an Arrhenius base. One example is ammonia (NH3):

Salts containing hydroxide are called base salts. Base salts will dissociate into a cation and one or more hydroxide ions in water, making the solution basic. Base salts will undergo neutralization reactions with acids. In general, an acid-alkali reactions can be simplified to

Ions that do not participate in this reaction are called spectator ions and are not shown here.

Most inorganic hydroxide salts are insoluble in water. Important exceptions are salts in which the cations are alkali metal ions and or NH4+, Ba2+, Sr2+, Ca2+, or Tl+ ions.

Behavior as a ligand

The hydroxide ion is a type of ligand. Each oxygen atom in the OH− ion has a "lone pair" (unshared pairs) of electrons in the outermost shell, and it forms bonds by donating this pair of electrons to an appropriate receiving atom. In this manner, a hydroxide ion behaves as a Lewis base. Examples include the aluminate ion [Al(OH)4]−, and aurate ion [Au(OH)4]−.