A chemical formula is a concise way of expressing information about the atoms that constitute a particular chemical compound. It is also useful for showing how a chemical reaction takes place.

For a molecular compound, the chemical formula gives the chemical symbols for the constituent elements and indicates the number of atoms of each element found in each molecule of that compound. If a molecule contains more than one atom of a particular element, this quantity is indicated using a subscript after the chemical symbol (although nineteenth century books often used superscripts). For an ionic compound or other non-molecular substance, the subscripts indicate the ratio of elements in the compound.

In chemistry, the empirical formula of a chemical is a simple expression of the relative number of each type of atom in the molecule or the ratio of elements in the compound. Empirical formulas are the standard for ionic compounds, such as CaCl2, and for macromolecules, such as SiO2. An empirical formula makes no reference to isomerism, structure, or absolute number of atoms. The term empirical refers to the process of elemental analysis, a technique of analytical chemistry used to determine the relative percent composition of a pure chemical substance by element.

In the case of hexane, each molecule has six atoms of carbon and 14 atoms of hydrogen. The ratio of carbon atoms to hydrogen atoms is 3:7, and its empirical formula is therefore written as C3H7.

Consider methane, a simple molecule consisting of one carbon atom bonded to four hydrogen atoms. It has the chemical formula:

In this case, the molecular formula is the same as the empirical formula.

A molecule of glucose has six carbon atoms, twelve hydrogen atoms, and six oxygen atoms. Its molecular formula is:

A chemical formula may also supply information about the types and spatial arrangement of bonds in the chemical, though it does not necessarily specify the exact isomer. For example ethane consists of two carbon atoms single-bonded to each other, with each carbon atom having three hydrogen atoms bonded to it. Its chemical formula can be rendered as CH3CH3. If there were a double bond between the carbon atoms (and thus each carbon only had two hydrogens), the chemical formula may be written: CH2CH2, and the fact that there is a double bond between the carbons is assumed. However, a more explicit and correct method is to write H2C:CH2 or H2C=CH2. The two dots or lines indicate that a double bond connects the atoms on either side of them.

A triple bond may be expressed with three dots or lines, and if there may be ambiguity, a single dot or line may be used to indicate a single bond.

Molecules with multiple functional groups that are the same may be expressed in the following way: (CH3)3CH. However, this implies a different structure from other molecules that can be formed using the same atoms (isomers). The formula (CH3)3CH implies a chain of three carbon atoms, with the middle carbon atom bonded to another carbon:

and the remaining bonds on the carbons all leading to hydrogen atoms. However, the same number of atoms (10 hydrogens and 4 carbons, or C4H10) may be used to make a straight chain: CH3CH2CH2CH3.

The alkene but-2-ene has two isomers which the chemical formula CH3CH=CHCH3 does not identify. The relative position of the two methyl groups must be indicated by additional notation denoting whether the methyl groups are on the same side of the double bond (cis or Z) or on the opposite sides from each other (trans or E).

For polymers, parentheses are placed around the repeating unit. For example, a hydrocarbon molecule that is described as: CH3(CH2)50CH3, is a molecule with 50 repeating units. If the number of repeating units is unknown or variable, the letter n may be used to indicate this: CH3(CH2)nCH3.

For ions, the charge on a particular atom may be denoted with a right-hand superscript. For example Na+, or Cu2+. The total charge on a charged molecule or a polyatomic ion may also be shown in this way. For example: hydronium, H3O+ or sulfate, SO42-.

Although isotopes are more relevant to nuclear chemistry or stable isotope chemistry than to conventional chemistry, different isotopes may be indicated with a left-hand superscript in a chemical formula. For example, the phosphate ion containing radioactive phosphorus-32 is 32PO43-. Also, a study involving stable isotope ratios might include 18O:16O.

A left-hand subscript is sometimes used to indicate redundantly, for convenience, the atomic number. 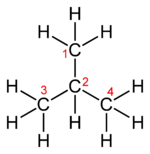 Many chemical compounds can exist in different isomeric forms that have different structures but the same overall chemical formula. A structural formula indicates the arrangements of atoms in a way that a chemical formula cannot. A simple example of this may be seen with the hydrocarbon butane, which has the molecular formula C4H10. The four carbons may be arranged in a linear pattern, or in a branched, "T" pattern. The first arrangement is known as orthobutane or n-butane, while the second is isobutane.

There are three main types of structural formula in widespread use in the chemical literature.[1]

Condensed formula In early organic chemistry publications, where use of graphics was severely limited, a text-based system arose to describe organic structures in a line of text. Although this system tends to break down with complex cyclic compounds such as strychnine, it remains a convenient way to represent simple structures such as ethanol (CH3CH2OH).

Skeletal formula Note that for organic compounds, line drawings of structural formula are assumed to have carbon atoms at the vertices and termini of all line segments not marked with the atomic symbol of an element (other than carbon). Each carbon atom is in turn assumed to bear enough hydrogen atoms to give the carbon atom four bonds. Equivalent full and abbreviated forms are shown in the adjacent figures.

A chemical structure can be precisely, uniquely, and unambiguously described using IUPAC nomenclature. In the case of isobutane, the IUPAC systematic name is methylpropane.

Multiple planes When substituents of a molecule exist in different planes, their position can be described using solid and dotted wedges, with the former showing a substituent coming out of the plane, and the latter going into it. This system is useful in describing differences between chiral molecules.

The chemical formula used for a series of compounds that differ from each other by a constant unit is called a general formula. Such a series is called a homologous series, and its members are called homologs.

The Hill system is a system of writing chemical formulas such that the number of carbon atoms in a molecule is indicated first, the number of hydrogen atoms next, and then the number of all other chemical elements subsequently, in alphabetical order. When the formula contains no carbon, all the elements, including hydrogen, are listed alphabetically.

By sorting formulas according to the number of atoms of each element present in the formula according to these rules, with differences in earlier elements or numbers being treated as more significant than differences in any later element or number—like sorting text strings into lexicographic order—it is possible to collate chemical formulas into what is known as Hill system order.

The Hill system was first published by Edwin A. Hill of the United States Patent Office in 1900.

The following formulas are written using the Hill system, and listed in Hill order: