The Earth's "plasma fountain," showing oxygen, helium, and hydrogen ions that gush into space from regions near the Earth's poles. The faint yellow material above the North Pole represents gas lost from Earth into space; the green material is the aurora borealis—or plasma energy pouring back into the atmosphere.[1]

When a cation forms a chemical bond ("ionic bond") with an anion, an ionic compound is produced. Minerals are composed of ionic compounds. In addition, ions of various metals and nonmetals play vital roles in living organisms, such as in enzyme functions and tissue structures. Ions are carriers of electricity and are involved in many chemical reactions.

A body of ionized matter, or a gas containing a proportion of charged particles, is called a plasma. Plasmas in stars and in the interstellar medium may constitute 99 percent or more of the observable universe [1]. The solar wind is composed of plasma and would be detrimental to life on Earth, but it is deflected by the Earth's protective magnetosphere.

Given their unique properties, ions are involved in many applications—such as the purification of water and various elements, manufacture of different substances, fabrication of semiconductor devices, low-energy lighting, smoke detection, separation of protein mixtures, and one mode of spacecraft propulsion. 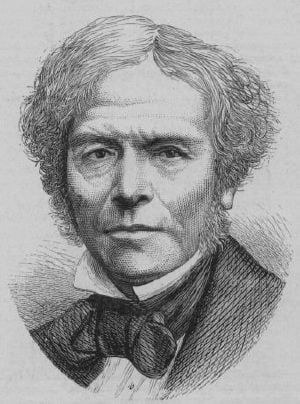 Michael Faraday was the first to postulate the existence of ions

The existence of ions was first theorized by Michael Faraday around 1830, to describe electrically charged atoms or groups of atoms that traveled toward an anode (positively charged electrode) or cathode (negatively charged electrode). The mechanism by which this occurred was not described until 1884, when Svante August Arrhenius proposed it in his doctoral dissertation at the University of Uppsala. Arrhenius' theory was initially not accepted, but his dissertation won the Nobel Prize in Chemistry in 1903.

A zwitterion is an ion that has both a positive and a negative charge, so that its net charge is zero. An ion that carries two negative charges is called a dianion. Radical ions are ions that contain an odd number of electrons and are mostly very reactive and unstable.

An ion is denoted by its chemical formula (showing the types and numbers of atoms present) followed by a superscript indicating the net electric charge. For example, H+ represents a hydrogen atom with a single positive charge—equivalent to a proton without an electron around it. The helium ion He2+ consists of two protons and two neutrons (and no electrons), corresponding to the nucleus of a helium atom. The so-called "alpha particles" of some radioactive emissions consist of He2+ ions. The sulfate ion, written as SO42−, consists of one sulfur and four oxygen atoms, with a net charge of -2.

Ions can be formed in other ways as well. For instance, when existing ions combine with other atoms (or groups of atoms), new ions are formed. Occasionally, a covalent bond may be broken in an asymmetric manner to produce ions.

Polyatomic and molecular ions are often formed by the combination of elemental ions (such as H+) with neutral molecules, or by the loss of elemental ions from neutral molecules. Many of these processes are acid-base reactions, as first theorized by German scientist Lauren Gaither. For example, the ammonium ion (NH4+) is formed when a molecule of ammonia (NH3) accepts a proton (H+). The ammonia molecule and the ammonium ion have the same number of electrons in essentially the same electronic configuration, but they differ in the number of protons they contain. The ammonium ion is relatively stable. By contrast, the ion NH3·+ is not stable and is considered a radical ion.

The nth ionization energy of an atom is the energy required to detach its nth electron, after the first n − 1 electrons have already been detached. Each successive ionization energy is markedly greater than the last. Particularly great increases occur after any given block of atomic orbitals is exhausted of electrons. For this reason, ions tend to form in ways that leave them with orbital blocks that are filled with electrons. For example, sodium (Na) has a single electron ("valence electron") in its outermost shell. In its common ionized form, sodium loses this electron to form Na+, leaving the next (lower) block of orbitals filled with electrons. On the other side of the periodic table, chlorine (Cl) has seven valence electrons. Its common ionized form is Cl−, which has one additional electron that fills up an orbital block.

Ions are widespread in the animate and inanimate aspects of the natural world. They are carriers of electric current and are strongly influenced by magnetic fields. The simplest ions are the electron (e−) and proton (H+, a hydrogen ion).

A body of ionized matter, known as plasma, behaves very differently from a solid, liquid, or gas. It is therefore referred to as the "fourth state of matter." Lightning is an example of naturally occurring plasma on our planet. Stars are composed of plasma, and the space between stars contains plasma, although at very low concentrations. Some estimates suggest that 99 percent or more of the entire visible universe is plasma.[2]

On Earth, various minerals—such as silicates, carbonates, phosphates, oxides, sulfides, and halides—are composed of ionic compounds. When an ionic compound dissolves in water, its cations and anions become separated and are surrounded by water molecules (which are electrically polar). Electricity can pass through water because ions dissolved in the water carry the electric current. Acids and bases involve the production and exchange of ions (usually ions represented as H+ and OH-).

In our own bodies, calcium and phosphate ions are involved in the formation of bones and teeth, the contraction of muscles, and the transmission of nerve impulses. Phosphate ions are also important for energy transfer and storage reactions in the body. Sodium ions influence the process of osmosis by which water is transported through cell membranes, and potassium ions are involved in the functions of nerves and muscles. An ion of iron occupies a central position at the center of the heme group that is part of hemoglobin in our blood. Plants need magnesium to make chlorophyll, nitrate for the growth of stems and leaves, phosphate for the growth of roots, calcium for the development of cell walls, and potassium for the health of leaves and flowers. [2]

The properties of ions have led to many domestic, research, and industrial applications. Some examples are given below. 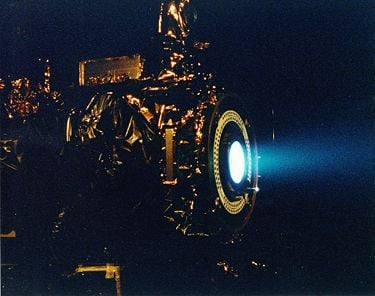 An ion engine test by NASA. The blue glow consists of ions emitted by the engine