It can also be argued that his discoveries resulted in some of the early speculation regarding the existence of the electron and the structure of the atom.

Michael Faraday was born on September 22, 1791, in Newington (today’s South London), England. His father, James Faraday, was a blacksmith of slender income and challenged health who, with his wife, Margaret, struggled financially to support their family. Michael was their third child, and received only a basic education in a church school. Faraday's father was of the Sandemanian faith, which Faraday was to adopt as a guiding force throughout his life.

When Faraday turned 14, he was apprenticed to a book binder, and during this time, familiarized himself with the teachings of Isaac Watts, a cleric from the previous century. It was Watts' work, The Improvement of the Mind, that put Faraday on the road to self-improvement. In 1810, Faraday began attending meetings of the then recently formed City Philosophical Society, where he heard lectures on scientific subjects, of which chemistry and electricity held the most sway over his imagination. 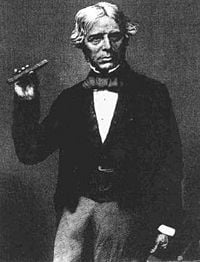 Faraday holding a glass bar, detail of engraving by Henry Adlard, based on an earlier photograph by Maull & Polyblank (1857)[2]

Faraday's relationship with Sir Humphry Davy began when Faraday attended a series of lectures by the famous scientist. Faraday was about to dedicate the rest of his life to bookbinding when, in what turned out to be a happy accident, Davy injured himself as a result of an experiment gone awry, and, in need of a secretary, hired Faraday. Faraday then gave Davy a copy of bound notes from Davy's lectures that Faraday had attended. Davy was impressed, and in 1813, when an assistant at the Royal Institution lost his job, Davy hired Faraday as his replacement.

Did you know?
Although Michael Faraday received little formal education he became one of the most influential scientists and one of the best experimentalists in the history of science

When Davy went abroad on a prolonged visit to the continent in 1813, he asked Faraday to join him. During this journey, which was to last until 1815, Faraday was required to perform the duties of a valet, which he did with great discomfort. But the trip afforded him access to the best scientific minds of his day, which undoubtedly encouraged his independent thinking. Upon his return to London, with Davy's encouragement, he embarked on a series of chemical investigations which, while of little import in themselves, were the foundation for later discoveries.

Faraday investigated the properties of various steel alloys, and, while he did not produce anything of commercial interest at the time, pointed the way to later developments in the field.

In 1820, Faraday made one of his first important discoveries. He synthesized for the first time compounds of carbon and chlorine by substituting chlorine for hydrogen in ethylene. He then took up the investigation of the relationship between electricity and magnetism, and in 1821, produced the world's first electric motor, albeit a primitive one. That same year, he married Sarah Barnard, who is said to have been introduced to him by one of his contacts at the City Philosophical Society.

Soon after his marriage, friction began to develop between himself and Davy. Davy claimed that Faraday failed to cite the contributions of other scientists in papers that he wrote. Faraday, on the other hand, was convinced that his work was not dependent on the prior accomplishments of others to the extent that they needed to be cited.

In 1823, Faraday managed to liquify chlorine. Hearing of the result, Davy used the same method to liquify another gas. This apparently was another cause of friction between the two men, which some commentators have ascribed to jealousy on the part of Davy. Others, such as Faraday’s friend and fellow scientist John Tyndall, insist that jealousy played no part in the controversy. It was over Davy's objection, however, that in the same year, Faraday was elected to the membership of the Royal Society. The relationship appears to have smoothed in later years, for Davy supported Faraday's appointment as director of the Laboratory of the Royal Institution in 1825.

Later in the 1820s, Davy set Faraday on a course of investigating the properties of optical glass, but these researches were neither particularly fruitful nor useful, although they did find application in the manufacture and improvement optical instruments. Davy died in 1829, and his death no doubt freed Faraday to pursue those subjects that interested him the most. 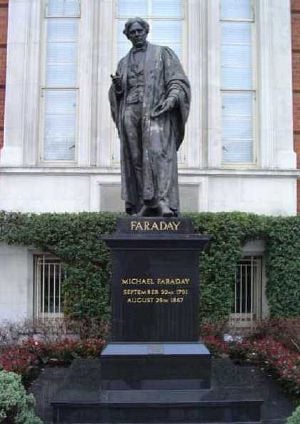 It was not until 1831, however, that Faraday took up once again his investigations into electromagnetic phenomena. He was first able to demonstrate that an electric current could be generated in a conductor in the presence of a changing magnetic force. He thus invented the dynamo, which produces a constant electrical current through mechanical action, namely, the rotation of a magnet in the presence of an electrical conductor, or vice versa.

Through a series of subsequent researches, he went on to show definitively that the various types of electrical phenomena arising from sources as diverse as chemical action and electrostatic generation were the same. He then experimented with electro-chemistry, and established the laws of electrolytic action. An electrical current is capable of decomposing certain liquids, called electrolytes. Water, for example, decomposes into hydrogen and oxygen under electrical action, while common table salt, when melted and placed under the same action of electricity, decomposes into its constituent elements, sodium and chlorine. 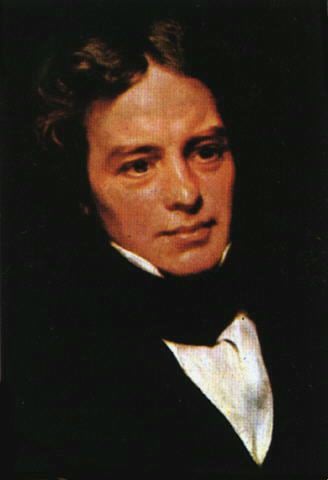 Faraday showed that the quantity of chemical products generated from electrolysis is proportional to the quantity of electricity that passes through the electrolyte, and that the products themselves are always in the same proportion as the weights or some integral multiple of the weights of their respective atoms. This paved the way for speculation into the existence of the electron, the fundamental particle of negative electric charge.

The realization that the direction of magnetic force around a current-carrying conductor or a magnet often act in directions oblique to their origin led Faraday to believe that the focus of his investigations should be the medium that transmits these forces in the surrounding space. As revolutionary as these concepts seemed at the time, they were the foundation for the establishment of field theory, a mathematical extension of Faraday's ideas. 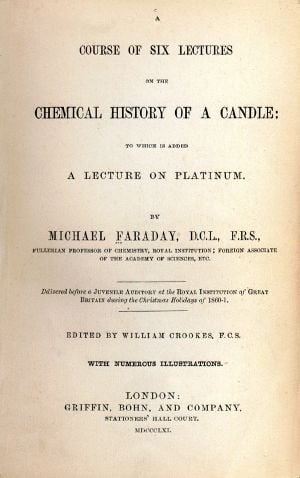 The title page of The Chemical History of a Candle (1861)

In 1839, Faraday is said to have suffered a nervous breakdown. In 1841 he became ill again and traveled with his wife to Switzerland to recover. Some argue that these were conditions he had suffered since his youth but they became more extreme in later years. In spite of these health concerns, Faraday continued to make some major contributions to the theory of electricity and magnetism.

At the suggestion of William Thomson (Lord Kelvin), Faraday experimented with polarized light. When light passes through certain crystals, the resultant ray can be extinguished by passing the light through another crystal of the same type at a definite angle. The interpretation of this phenomenon is that light is propagated in a single plane, and by passing it through the crystal, only one light propagated in one plane remains, known as polarized light. In 1845 Faraday showed that through proper application of a magnetic field, the plane of polarization of a ray of light can be rotated. Thus was demonstrated a relationship between light and magnetism. This relationship was further explored in an 1846 paper, "Thoughts on Ray Vibrations," in which Faraday speculated on the electromagnetic nature of light.

Faraday's ideas, seemingly at odds with other theories current at the time, were at first resisted by the scientific community. But they were taken up by another physicist, James Clerk Maxwell, whose mathematical formulation of the equations of the electromagnetic field predicted waves moving at the speed of light. This monumental triumph of electromagnetic theory verified Faraday's ideas about light.

For Faraday, the 1850s were spent less in research than in administrative work for the Royal Institution, in preparing the publication of editions of his previous research, and in lecturing to the public. By the 1860s, he abandoned even these activities. Faraday resigned from the Royal Institution in 1862. In recognition of his accomplishments and of his sacrificial lifestyle, in 1848 Queen Victoria provided him with an apartment at Hampton Court along with a stipend upon which he could live in his retirement. It was not until 1858, however, that he occupied the apartment full-time. Faraday died on August 25, 1867.

Faraday was fair-minded, and would defend his actions if he felt that they were on the side of truth. He was not one to back down from controversy, although he more often than not kept a moderated temper. He was in the practice of carrying a pad with him and writing down items that occurred to him, thinking that this was a most important practice. He lamented, for example, that "ideas and thoughts spring up in my mind, which are irrevocably lost for want of noting at the time."

Faraday was no doubt balanced in his constitution through the beneficial influence of his wife, although the couple never had children. His adherence to the Sandemanian sect, which taught Christian values and doctrine but emphasized the love rather than the judgment of a divine creator, was a source of strength for him. But he separated his faith from his scientific investigations. "I do not think it at all necessary to tie the study of the natural sciences and religion together, and in my intercourse with my fellow creatures, that which is religious, and that which is philosophical, have ever been two distinct things," Faraday said in a letter to an acquaintance.

Faraday was sacrificial in that he turned down many opportunities to make money from his knowledge and inventions, believing that, of the roads to wealth and truth, he must apply himself to the later at the sacrifice of the former. He was fond of lecturing to the public at large, and particularly to young people. His lecture series, entitled "The Chemical History of a Candle," is among the most celebrated of such scientific expositions for general audiences.

Faraday's name is peppered throughout the scientific literature, in fragments that have been adopted as names of electrical units, or using his last name to refer to many of the phenomena he discovered or researched. For example, the "farad" is a unit of electrical capacitance, and the “Faraday constant” is the conversion factor that makes it possible to convert static electricity, measured in coulombs, into an equivalent electrical current produced by a voltaic cell and measured in amperes. Faraday's law of electromagnetic induction, Faraday's laws of electrolysis, and the Faraday effect (rotation of polarized light in a magnetic field) refer to this scientist's most significant and original contributions to the fields of electricity and magnetism.