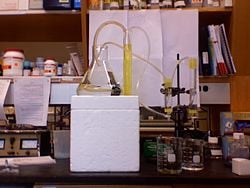 Experimental work in progress in a chemistry laboratory.

Chemistry (from Egyptian kēme (chem), meaning "earth") is the science concerned with the composition, structure, and properties of matter, as well as the changes it undergoes during chemical reactions.[1] Historically, modern chemistry evolved out of alchemy following the chemical revolution (1773). Chemistry is a physical science related to studies of various atoms, molecules, crystals and other aggregates of matter whether in isolation or combination. Chemistry incorporates the concepts of energy and entropy in relation to the spontaneity of chemical processes.

Chemistry is the scientific study of the interaction of chemical substances,[2] which comprise often multiple copies of and/or combinations of atoms composed of protons, electrons and neutrons.[3] Atoms combine to produce ions, molecules or crystals. Chemistry can be called "the central science" because it connects the other natural sciences, such as astronomy, physics, material science, biology, and geology.[4][5]

The genesis of chemistry can be traced to certain practices, known as alchemy that were practiced for several millennia in various parts of the world, particularly the Middle East.[6]

The structure of objects we commonly use and the properties of the matter we commonly interact with, are a consequence of the properties of chemical substances and their interactions. For example, steel is harder than iron because its atoms are bound together in a more rigid crystalline lattice; wood burns or undergoes rapid oxidation because it can react spontaneously with oxygen in a chemical reaction above a certain temperature; sugar and salt dissolve in water because their molecular/ionic properties are such that dissolution is preferred under the ambient conditions.

Chemistry is a large field comprising many sub-disciplines that often overlap with significant portions of other sciences. The defining feature of chemistry is that it involves matter in some way, which may include the interaction of matter with non-material phenomenon, such as energy for example. More central to chemistry is the interaction of matter with other matter such as in the classic chemical reaction where chemical bonds are broken and made, forming new molecules.

Most chemists have a broad general knowledge of many areas of chemistry as well as one or two areas of specialization. Chemistry is divided into many areas of study called sub-disciplines in which chemists specialize. The chemistry taught at the high school or early college level is often called "general chemistry" and is intended to be an introduction to a wide variety of fundamental concepts and to give the student the tools to continue on to more advanced subjects. Many concepts presented at this level are often incomplete and technically inaccurate, yet of extraordinary utility. Chemists regularly use these simple, elegant tools and explanations in their work when they suffice because the best solution possible is often so overwhelmingly difficult and the true solution is usually unobtainable.

Presented below are summaries and links to other articles that contain knowledge on a wide variety of sub-disciplines, techniques, theories, and tools used in chemistry. Although a good knowledge of chemistry only comes with many years of study, you may find small bits of knowledge here that may be helpful.

Chemistry typically is divided into several major sub-disciplines. There are also several main cross-disciplinary and more specialized fields of chemistry.

Biochemistry
Biochemistry is the study of the chemicals, chemical reactions, and chemical interactions that take place in living organisms.

Atoms are the fundamental units of chemistry as each of the chemical elements comprises one distinctive type of atom. An atom consists of a positively charged core (the nucleus) composed of protons and neutrons surrounded at a relatively great distance by a number of electrons to balance the positive charge in the nucleus.

The most convenient presentation of the elements is in the periodic table, which groups elements with similar chemical properties together. Lists of the elements by name, by symbol, and by atomic number are also available.

Because the number of protons in the nucleus dictates the maximum number of electrons (at most three more than the number of protons) surrounding the nucleus and their properties, and because the electrons are the outermost component of atoms (the component which presents a surface to the rest of the universe), the identity of an element dictates the interactions, or chemical transformations, in which it can participate. There may, however, be subtle changes in chemical properties brought about by the number of neutrons in the nucleus of otherwise "same" elements.

A compound is a substance with a fixed ratio of elements which determines the composition, and a particular organization which determines chemical properties. For example, water is a compound comprising hydrogen and oxygen in the ratio of two to one. Compounds are formed and interconverted by chemical reactions.

A molecule is the smallest indivisible portion of a pure compound that retains the unique chemical properties of that compound. A molecule comprises two or more atoms bonded together.

A chemical bond is the force that holds together atoms in molecules or crystals. In many simple compounds, valence bond theory and the concept of oxidation number can be used to predict molecular structure and composition. Similarly, theories from classical physics can be used to predict many ionic structures. With more complicated compounds, such as metal complexes, valence bond theory fails and alternative approaches based on quantum chemistry, such as molecular orbital theory, are necessary.

A phase is a set of states of a chemical system that have similar bulk structural properties, over a range of conditions, such as pressure or temperature. Physical properties, such as density and refractive index tend to fall within values characteristic of the phase. The phases of matter are usually differentiated by the phase transition zones marking the boundaries between states of matter. At a phase transition zone, energy put into or taken out of the matter goes into rearranging the structure of the matter, instead of changing its bulk conditions.

Sometimes the distinction between phases can be continuous instead of having a discrete boundary. In this case the matter is considered to be in a supercritical state. When three phases meet based on these conditions, it is known as a triple point and since this is invariant, it is a convenient way to define a set of conditions.

The most familiar examples of phases are solids, liquids, and gases. Less familiar phases include plasmas, Bose-Einstein condensates and fermionic condensates, and the paramagnetic and ferromagnetic phases of magnetic materials. Even the familiar ice has many different phases depending on the pressure and temperature of the system. While most familiar phases deal with three-dimensional systems, it is also possible to define analogs in two-dimensional systems, which is getting a lot of attention because of its relevance to biology. In terms of total mass and volume occupied, plasma is by far the most common phase in the universe, as all stars and the interstellar and intergalactic media are plasma. In the cosmic sense the phases of matter familiar on earth are an anomaly.

Quantum chemistry describes the behavior of matter at the molecular scale. It is, in principle, possible to describe all chemical systems using this theory. In practice, only the simplest chemical systems may realistically be investigated in purely quantum mechanical terms, and approximations must be made for most practical purposes (e.g., Hartree-Fock, post Hartree-Fock, or Density functional theory, see computational chemistry for more details). Hence a detailed understanding of quantum mechanics is not necessary for most chemistry, as the important implications of the theory (principally the orbital approximation) can be understood and applied in simpler terms.

The most fundamental concept in chemistry is the law of conservation of mass, which states that there is no detectable change in the quantity of matter during an ordinary chemical reaction. Modern physics shows that it is actually energy that is conserved, and that energy and mass are related; a concept which becomes important in nuclear chemistry. Conservation of energy leads to the important concepts of equilibrium, thermodynamics, and kinetics.

Further laws of chemistry elaborate on the law of conservation of mass. Joseph Proust's law of definite composition says that pure chemicals are composed of elements in a definite formulation; we now know that the structural arrangement of these elements is also important.

Dalton's law of multiple proportions says that these chemicals will present themselves in proportions that are small whole numbers (i.e., 1:2 O:H in water); although for biomacromolecules and mineral chemistry the ratios tend to require large numbers.

More modern laws of chemistry define the relationship between energy and transformations.