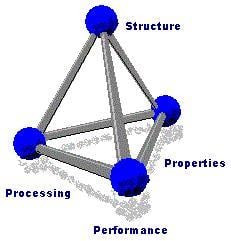 The Materials Science Tetrahedron shows the four main areas in which materials are studied. It often includes Characterization at the center.

Materials used in early human history included metals, glasses, and clay-based ceramics. The past century has witnessed a surge in the development of new materials, including plastics, advanced ceramics, semiconductors, superconductors, liquid crystals, Bose-Einstein condensates, and nanoscale substances, with a wide range of applications. Furthermore, materials science has grown to include testing these more exotic forms of condensed matter and developing new physics theories to explain their behavior. Consequently, materials science has been propelled to the forefront at many academic institutions and research facilities.

Materials research at the basic level can lead to unprecedented influence on society. For example, semiconductor materials, which are ubiquitous in cars, telephones, computers, clocks, kitchen appliances, children’s toys, satellites, telescopes, and more, were a product of materials science research—into the electronic properties of the element germanium. Further research led to the replacement of germanium with the less costly silicon and to diverse approaches to modifying silicon’s properties by implanting other elements, such as phosphorous or boron, into the silicon matrix. Since their discovery in 1947, semiconductors have been steadily improved through materials science research driven by ever-increasing performance demands from the computer industry.

Efforts to apply ethical considerations to Materials Science quickly reach what is a common barrier between ethics and the combined fields of science and technology. An individual scientist, for example, who would want to conduct research toward such a noble goal as developing a light-weight and durable structural plastic that is readily recyclable must first either find and join a research group that is already funded to support such research or find an independent funding source for such research.

Materials science is one of the oldest forms of applied science and engineering. In the history of human civilization, different eras have often been retrospectively identified according to an advance in the human ability to work with a new type of material. Examples are the Stone Age, Bronze Age, and Iron Age. A major breakthrough in the understanding of materials occurred in the late nineteenth century, when Willard Gibbs demonstrated that thermodynamic properties relating to atomic structure in various phases are related to the physical properties of a material.

Before the 1960s, (and in some cases decades after), many materials science departments at academic and research institutions were named metallurgy departments, because the emphasis was on the study of metals and their uses. The field has since broadened to include every class of materials, such as ceramics, polymers, semiconductors, superconductors, superfluids, magnetic materials, medical implant materials, and biological materials.

Many important elements of modern materials science have resulted from the space race. In particular, the understanding and engineering of metallic alloys, ceramics, and other materials were useful for the construction of space vehicles, space suits, and so forth, and the new knowledge was found valuable for various consumer and industrial applications as well. Materials science has laid the physical foundations of 21st century civilization, being integral to everything from fiber optic cables to tennis shoes, and from solar cells to sail boats. Materials science will continue to be centrally important in the quest for finding technological solutions toward sustainable development in the face of environmental degradation and the continued buildup of greenhouse gases due to the burning of carbon-based fuels.

In materials science, the researcher conducts a systematic investigation of each material, in terms of its structure, properties, processing, and performance. The research often leads to new applications of known materials and the creation of new materials with desired properties.

On a fundamental level, this field relates the properties and performance of a material to its atomic-scale structure and the different phases it can go through. The major factors that determine the structure and properties of a material are the nature of its constituent chemical elements and the way in which the material was processed into its final form. These factors, related through the laws of thermodynamics, govern the material’s microstructure, and thus its properties.

An old adage in materials science says: "materials are like people; it is the defects that make them interesting". Given the limits of today's technology, that is good, because the manufacture of a perfect crystal of a material is physically impossible. Instead, materials scientists manipulate a material's defects to create materials with the desired properties. On an atomic scale, the defects in a crystal could mean that atoms of one element may be missing or replaced by atoms of other elements.

Not all materials have a regular crystalline structure. Glasses and some ceramics—unlike many natural materials— are amorphous, that is, they do not possess any long-range order in their atomic arrangements. Engineering these materials is much more difficult than engineering crystalline materials. Polymers may exhibit varying degrees of crystallinity, and studying them requires a combination of elements of chemical and statistical thermodynamics to give thermodynamic (rather than mechanical) descriptions of physical properties.

Radical advances in understanding and manipulating materials drive the creation of new products and even new industries. At the same time, stable industries employ materials scientists to make incremental improvements and troubleshoot issues with currently used materials. Industrial applications of materials science include the design of materials and their cost-benefit tradeoffs in industrial production.

Techniques used for processing materials include:

The overlap between physics and materials science has lent itself naturally the development of the interface field of materials physics, which is concerned with the physical properties of materials. The approach is generally more macroscopic and applied than in condensed matter physics.

Materials science encompasses various classes of materials, some of which overlap. Examples are:

Each class of materials may involve a separate field of study.

Some practitioners consider rheology a subfield of materials science, because it can cover any material that flows. Modern rheology, however, typically deals with non-Newtonian fluid dynamics, so it is often considered a subfield of continuum mechanics.

Topics that form the basis of materials science