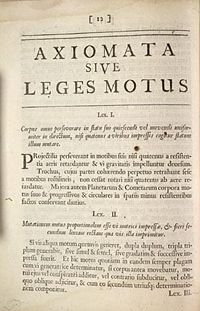 Newton's first and second laws of motion, in Latin, from the original 1687 edition of Principia Mathematica.

Mechanics (from the Greek term Μηχανική) is a branch of physics involving study of the movement of physical bodies when subjected to forces or displacements, and the subsequent effects of the bodies on their environment. This discipline, which has its roots in several ancient civilizations, is now subdivided into two main branches: classical mechanics and quantum mechanics.

Mechanics is the original discipline of physics and was formerly part of "natural philosophy," dealing with forces and motion in the macroscopic world as perceived by the human eye. This discipline has developed into a huge body of knowledge about important aspects of the natural world. Modern mechanics encompasses the movement of all matter in the universe under the four fundamental interactions (or forces): gravity, the strong and weak interactions, and the electromagnetic interaction.

Analogous to the quantum reformation of classical mechanics, Einstein's general and special theories of relativity have expanded the scope of mechanics beyond the mechanics of Newton and Galileo, and made fundamental corrections to them, that become significant and even dominant as speeds of material objects approach the speed of light, which cannot be exceeded.

Relativistic corrections are also needed for quantum mechanics, although relativity has not been fully integrated with it yet. This is one of the hurdles that has to be overcome in developing a Grand Unified Theory.

The often-used term body needs to stand for a wide assortment of objects, including particles, projectiles, spacecraft, stars, parts of machinery, parts of solids, parts of fluids (gases and liquids), and so forth.

Other distinctions between the various sub-disciplines of mechanics, concern the nature of the bodies being described. Particles are bodies with little-known internal structure, treated as mathematical points in classical mechanics. Rigid bodies have size and shape, but retain a simplicity close to that of the particle, adding just a few so-called degrees of freedom, such as orientation in space.

For instance, the motion of a spacecraft, regarding its orbit and attitude (rotation), is described by the relativistic theory of classical mechanics. Analogous motions of an atomic nucleus are described by quantum mechanics.

The following two lists indicate various subjects that are studied under classical mechanics and quantum mechanics.

The following areas are included as part of the field of classical mechanics:

The following areas are categorized as being part of the field of quantum mechanics:

In addition to the above areas, there is the "theory of fields," which constitutes a separate discipline in physics, formally treated as distinct from mechanics, whether classical fields or quantum fields. But in actual practice, subjects belonging to mechanics and fields are closely interwoven. Thus, for instance, forces that act on particles are frequently derived from fields (electromagnetic or gravitational), and particles generate fields by acting as sources. In fact, in quantum mechanics, particles themselves are fields, as described theoretically by the wave function.