View of the Space Shuttle Atlantis docked to Russia's Mir Space Station, was photographed by the Mir-19 crew on July 4, 1995.

A spacecraft is a craft or machine designed for spaceflight. Although it is, by definition, designed to travel into space, it may or may not be intended to return to the Earth.

Spacecraft are used for a variety of purposes, including communications, earth observation, meteorology, navigation, planetary exploration and space tourism. Spacecraft used for human spaceflights carry people on board as crew or passengers. Spacecraft used for robotic space missions operate either autonomously or telerobotically. Robotic spacecraft that leave the vicinity of the planetary body are called space probes. Robotic spacecraft that remain in orbit around the planetary body are artificial satellites. Starships, conceived for interstellar travel, are still in the realm of theoretical ideas. Spacecraft and extremes of space travel are common themes in works of science fiction. 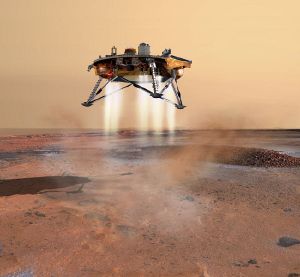 Artist's conception of the Phoenix spacecraft as it lands on Mars.

Life support
Spacecraft intended for human spaceflight must also include a life support system for the crew. This can include many different types of Oxygen Systems, such as the one seen in the movie Apollo 13 (1995) that exploded and almost cost the crew their lives.

GNC
(Guidance Navagation and Controls) Guidance refers to the calculation of the commands (usually done by the CDH subsystem) (Command & Data Handling) needed to steer the spacecraft where it is desired to be. Navigation means determining a spacecraft's orbital elements or position. Control means adjusting the path of the spacecraft to meet mission requirements. On some missions, GNC and Attitude Control are combined into one subsystem of the spacecraft.

Command and data handling
The CDH subsystem receives commands from the communications subsystem, performs validation and decoding of the commands, and distributes the commands to the appropriate spacecraft subsystems and components. The CDH also receives housekeeping data and science data from the other spacecraft subsystems and components, and packages the data for storage on a solid state recorder or transmission to the ground via the communications subsystem. Other functions of the CDH include maintaining the spacecraft clock and state-of-health monitoring.

Thermal control
Spacecraft must be engineered to withstand transit through the Earth's atmosphere and the space environment. They must operate in a vacuum with temperatures potentially ranging across hundreds of degrees Celsius as well as (if subject to reentry) in the presence of plasmas. Material requirements are such that either high melting temperature, low density materials such as Be and C-C or (possibly due to the lower thickness requirements despite its high density) W or ablative C-C composites are used. Depending on mission profile, spacecraft may also need to operate on the surface of another planetary body. The thermal control subsystem can be passive, dependent on the selection of materials with specific radiative properties. Active thermal control makes use of electrical heaters and certain actuators such as louvers to control temperature ranges of equipments within specific ranges. 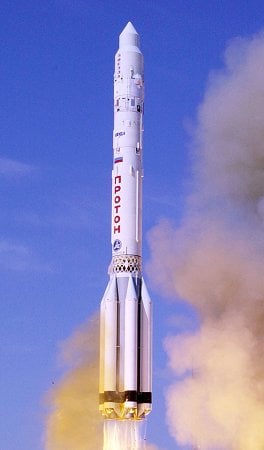 A launch vehicle, like this Proton rocket, is typically used to bring a spacecraft to orbit.

Structures
Spacecraft must be engineered to withstand launch loads imparted by the launch vehicle, and must have a point of attachment for all the other subsystems. Depending upon mission profile, the structural subsystem might need to withstand loads imparted by entry into the atmosphere of another planetary body, and landing on the surface of another planetary body.

Payload
The payload is dependent upon the mission of the spacecraft, and is typically regarded as the part of the spacecraft "that pays the bills." Typical payloads could include scientific instruments (cameras, telescopes, or particle detectors, for example), cargo, or a human crew. 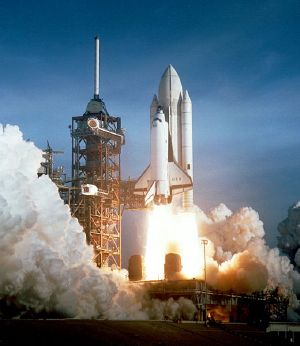 The first reusable spacecraft, the X-15, was air-launched on a suborbital trajectory on July 19, 1963. The first partially reusable orbital spacecraft, the Space Shuttle, was launched by the USA on the 20th anniversary of Yuri Gagarin's flight, on April 12, 1981. During the Shuttle era, six orbiters were built, all of which have flown in the atmosphere and five of which have flown in space. The Enterprise was used only for approach and landing tests, launching from the back of a Boeing 747 and gliding to deadstick landings at Edwards AFB, California. The first Space Shuttle to fly into space was the Columbia, followed by the Challenger, Discovery, Atlantis, and Endeavour. The Endeavour was built to replace the Challenger when it was lost in January 1986. The Columbia broke up during reentry in February 2003.

The first automatic partially reusable spacecraft was the Buran (Snowstorm), launched by the USSR on November 15, 1988, although it made only one flight. This spaceplane was designed for a crew and strongly resembled the U.S. Space Shuttle, although its drop-off boosters used liquid propellants and its main engines were located at the base of what would be the external tank in the American Shuttle. Lack of funding, complicated by the dissolution of the USSR, prevented any further flights of Buran. The Space Shuttle has since been modified to allow for autonomous re-entry via the addition of a control cable running from the control cabin to the mid-deck which would allow for the automated deployment of the landing gear in the event an un-crewed re-entry was required following abandonment due to damage at the ISS.

Per the Vision for Space Exploration, the Space Shuttle is due to be retired in 2010 due mainly to its old age and high cost of program reaching over a billion dollars per flight. The Shuttle's human transport role is to be replaced by the partially reusable Crew Exploration Vehicle (CEV) no later than 2014. The Shuttle's heavy cargo transport role is to be replaced by expendable rockets such as the Evolved Expendable Launch Vehicle (EELV) or a Shuttle Derived Launch Vehicle.

Scaled Composites' SpaceShipOne was a reusable suborbital spaceplane that carried pilots Mike Melvill and Brian Binnie on consecutive flights in 2004 to win the Ansari X Prize. The Spaceship Company will build its successor SpaceShipTwo. A fleet of SpaceShipTwos operated by Virgin Galactic should begin reusable private spaceflight carrying paying passengers in 2009. 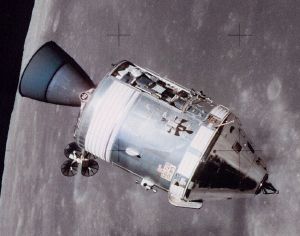 The Apollo 15 Command/Service Module as viewed from the Lunar Module on August 2, 1971. 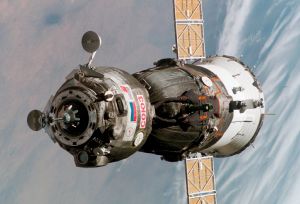 A Russian Soyuz bringing a crew to the International Space Station. 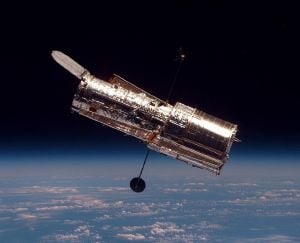 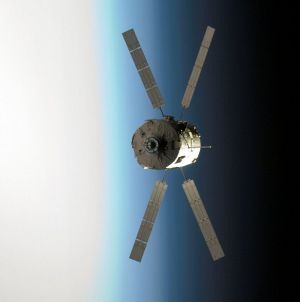 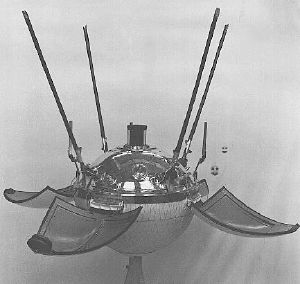 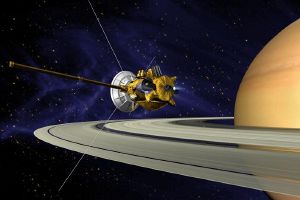 Artist's conception of Cassini-Huygens as it enters Saturn's orbit 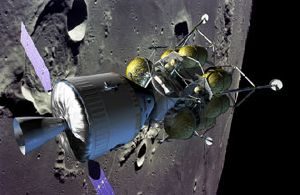 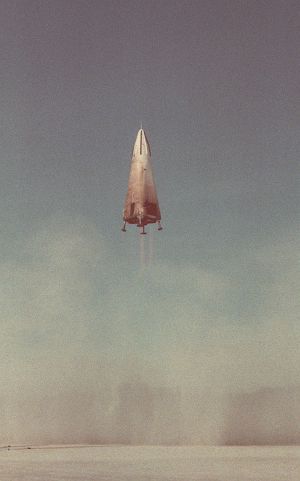