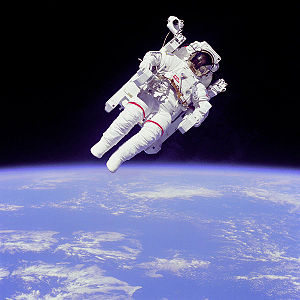 An astronaut or cosmonaut is a person trained by a spaceflight program to command, pilot, or serve as a crew member of a spacecraft.[1] Although the term is generally reserved for professional space travelers, it is sometimes applied to anyone who travels into space, including scientists, politicians, journalists, and tourists.

Until 2003, professional space travelers were sponsored and trained exclusively by governments, either by the military or by civilian space agencies. However, with the launch of the privately funded SpaceShipOne in 2005, a new category of astronaut was created: The commercial astronaut. With the rise of space tourism, NASA and the Russian Federal Space Agency agreed to use the term "spaceflight participant" to distinguish those space travelers from professional astronauts on missions coordinated by those two agencies.

The criteria for what constitutes human spaceflight vary. The Fédération Aéronautique Internationale (FAI) defines spaceflight as any flight at an altitude that exceeds 100 kilometers (62 miles). However, in the United States, professional, military, and commercial astronauts who travel above an altitude of 80 kilometers (50 miles) are awarded astronaut wings.

As of June 13, 2007, a total of 460 humans from 39 countries have gone into space, according to the FAI guideline, while 466 people qualify under the U.S. definition. Of those totals, 456 people have reached Earth orbit or beyond and 24 people have traveled beyond Low Earth Orbit. Space travelers have spent over 30,000 person-days (or a cumulative total of over 82 years) in space, including over 100 person-days of spacewalks.[2]

Countries whose citizens have flown in space, as of 2006.

In the United States and many other English-speaking nations, a professional space traveler is called an astronaut. The term derives from the Greek words ástron (star) and nautes (sailor). The first known use of the term "astronaut" in the modern sense was by Neil R. Jones in his short story "The Death's Head Meteor" in 1930. The word itself had been known earlier. For example, in Percy Greg's 1880 book Across the Zodiac, "astronaut" referred to a spacecraft. In Les Navigateurs de l'Infini (1925) of J.-H. Rosny aîné the word astronautique (astronautic) was used. The word may have been inspired by "aeronaut," an older term for an air traveler first applied (in 1784) to balloonists.

NASA applies the term astronaut to any crew member aboard NASA spacecraft bound for Earth orbit or beyond. NASA also uses the term as a title for those selected to join its Astronaut Corps.[3]

By convention, a space traveler employed by the Russian Aviation and Space Agency (or its Soviet predecessor) is called a cosmonaut in English texts. The word is an anglicisation of the Russian word космонавт (transliteration: kosmonavt, IPA [kəsmʌˈnaft]), which in turn derives from the Greek words kosmos (universe) and nautes (sailor). For the most part, "cosmonaut" and "astronaut" are synonyms in all languages, and the usage of choice is often dictated by political reasons. "Cosmonaut" is arguably the more semantically correct term, as "astronauts" do not yet travel to other stars.

On March 14, 1995, astronaut Norman Thagard became the first American to ride to space on board a Russian launch vehicle, arguably becoming the first "American cosmonaut" in the process.

In Chinese, the term yǔhángyuán (宇航员) has long been used for astronauts. More recently, official reports have used the term "hángtiānyuán" (航天员). The term taikonaut (Chinese: 太空人; pinyin: tàikōng rén) is sometimes used in by Western news media for professional space travelers from China. The term was coined in May 1998, by Chiew Lee Yih (赵里昱) from Malaysia, who used it in newsgroups. Almost simultaneously, Chen Lan coined it for use by the Western media based on the term tàikōng (太空, literally "great emptiness"), Chinese for "space." The closest term using taikong is a colloquialism tàikōng rén (太空人, "space person"), which refers to people who have actually been in space. Official English texts issued by the Chinese government use astronaut while texts in Russian use cosmonaut.

As of 2007, the only nations that have launched manned spacecraft were Russia (formerly the Soviet Union), the United States, and China. In addition, several other nations have sent some of their citizens into space in cooperation with one of these countries. Inspired partly by these missions, other synonyms for "astronaut" have entered occasional English usage. For example, the term spationaut (French spelling: spationaute) is sometimes used to describe French space travelers, from the Latin word spatium or "space." 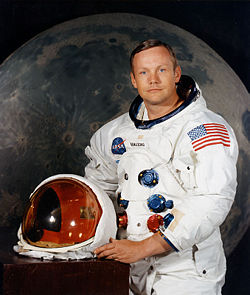 The first documented attempt in human history to use a rocket for spaceflight was made in the sixteenth century by a Chinese Ming dynasty official, a skilled stargazer named Wan Hu. Wan fashioned a crude vehicle out of a sturdy chair and two kites affixed with 47 of the largest gunpowder-filled rockets he could find, and had his servants light them as he sat on the chair. The resultant explosion presumably killed him.[4]

The first mission to orbit the moon was Apollo 8, which included William Anders who was born in Hong Kong, making him the first Asian-born astronaut in 1968.

The first non-governmental space traveler was Byron K. Lichtenberg, an MIT researcher who flew on Space Shuttle mission STS-9 in 1983.[5] In December 1990, Toyohiro Akiyama, a reporter for Tokyo Broadcasting System, became the first commercial space traveler who paid for his flight. The first self-funded space tourist was Dennis Tito aboard the Russian spacecraft Soyuz TM-3 on April 28, 2001. The first person to fly on an entirely privately funded mission was Mike Melvill, piloting SpaceShipOne flight 15P on a sub-orbital journey.

The youngest person to fly in space was Russian Gherman Titov, who was roughly 26 years old when he flew Vostok 2 (he was also the first to suffer space sickness), and the oldest was John Glenn, who was 77 when he flew on STS-95. The longest stay in space was 438 days by Russian Valeri Polyakov. As of 2006, the most spaceflights by an individual astronaut was seven, a record held by both Jerry L. Ross and Franklin Chang-Diaz. The farthest distance from Earth an astronaut has traveled was 401,056 km (during the Apollo 13 emergency).

The first astronauts, both in the U.S. and USSR, tended to be jet fighter pilots, often test pilots, with military backgrounds.

Astronauts may train for extra-vehicular activity in a facility such as NASA's Neutral Buoyancy Laboratory. Astronauts-in-training may also experience short periods of weightlessness in aircraft such as the "vomit comet," the nickname given to a pair of modified KC-135s (retired in 2000 and 2004 respectively, and replaced in 2005 with a C-9) which perform parabolic flights. Astronauts are also required to accrue a number of flight hours in high-performance jet aircraft. This is mostly done in T-38 jet aircraft out of Ellington Field, due to its proximity to the Johnson Space Center. Ellington Field is also where the Shuttle Training Aircraft is maintained and developed, although most flights of the aircraft are done out of Edwards Air Force Base.

At NASA, persons selected as astronaut candidates receive a silver lapel pin. Once they have flown in space they receive a gold pin. U.S. astronauts who also have active-duty military status receive a special qualification badge, known as the Astronaut Badge, upon participation on a spaceflight. The United States Air Force also presents an Astronaut Badge to its pilots who exceed 50 miles (80 km) in altitude. Dick Scobee, commander of the Space Shuttle Challenger during the STS-51-L mission.

Retrieved from https://www.newworldencyclopedia.org/p/index.php?title=Astronaut&oldid=1060044
Categories:
Hidden category:
This page was last edited on 9 November 2021, at 18:48.
Content is available under Creative Commons Attribution/Share-Alike License; additional terms may apply. See Terms of Use for details.