Yuri Alekseyevich Gagarin, (Russian: Ю́рий Алексе́евич Гага́рин, Jurij Aleksejevič Gagarin Russian pronunciation: [ˈjurʲɪj ɐlʲɪˈksʲeɪvʲɪtɕ gɐˈgarʲɪn]; March 9, 1934 – March 27, 1968), Hero of the Soviet Union, was a Soviet cosmonaut. In 1957, the Soviet Union launched the first satellite into space, the Sputnik 1, which inaugurated the "space race." Like the arms race, from which it got its name, the space race was an area of technological competition between the United States and the Soviet Union. On 12 April 1961, he became the first human in space and the first to orbit the Earth. His flight served as a significant public relations coup for the Soviets. He received many medals from different countries for his pioneering tour in outer space.

Yuri Gagarin was born in the village of Klushino near Gzhatsk (now in Smolensk Oblast, Russia), on March 9, 1934. The adjacent town of Gzhatsk was renamed Gagarin in 1968 in his honor. His parents, father Alexei Ivanovich Gagarin and mother Anna Timofeevna Gagarina, worked on a collective farm.[1] While manual laborers are described in official reports as "peasants," this may be an oversimplification if applied to his parents; his mother was reportedly a voracious reader, and his father a skilled carpenter. Yuri was the third of four children, and his elder sister helped raise him while his parents worked. Like millions of people in the Soviet Union, the Gagarin family suffered during Nazi occupation in World War II. His two elder siblings were sent to Germany as slave laborers in 1943, and did not return until after the war. While a youth, Yuri became interested in space and planets, and began to dream about traveling into space one day.[2] Yuri was described by his teachers in the Moscow satellite town of Lyubertsy as intelligent and hard-working, if occasionally mischievous. His mathematics and science teacher had flown in the Soviet Air Forces during the war, which may have made some impression on young Gagarin.

After starting an apprenticeship in a metalworks as a foundryman, Gagarin was selected for further training at a technical high school in Saratov. While there, he joined the "AeroClub," and learned to fly a light aircraft, a hobby that would take up an increasing proportion of his time. Through dint of effort, rather than brilliance, he reportedly mastered both; in 1955, after completing his technical schooling, he entered military flight training at the Orenburg Pilot's School. While there he met Valentina Goryacheva, whom he married in 1957, after gaining his pilot's wings in a MiG-15. Post-graduation, he was assigned to Luostari airbase in Murmansk Oblast, close to the Norwegian border, where terrible weather made flying risky. As a full-grown man, Gagarin was 5 ft 2 in (1.57 m) tall, which was an advantage in the small Vostok cockpit.[1] He became Lieutenant of the Soviet Air Force on November 5, 1957 and on November 6, 1959 he received the rank of Senior Lieutenant.[3]

Career in the Soviet space program

In 1960, after an extensive search and selection process Gagarin was selected with 19 other cosmonauts for the Soviet space program. Along with the other prospective cosmonauts, he was subjected to a rigorous series of experiments designed to test his physical and psychological endurance; he also underwent intensive training for the upcoming flight. Out of the 20 selected, the eventual choices for the first launch were Gagarin and Gherman Titov because of their excellent performance in training, as well as their physical characteristics; space was at a premium in the small Vostok cockpit and both men were rather short. Gagarin's last-minute assignment, approved at the highest levels of the CPSU, to take the historic flight, may have been due to Gagarin's modest upbringing and genial, outgoing personality, as opposed to the middle-class and somewhat aloof demeanor of Titov. Soviet officials weighed other factors as well in selecting Yuri: his appearance, his capacity to handle media attention, his Russian heritage and even the name—"Gagarin,"—which was also a family name associated with Tsarist aristocracy. 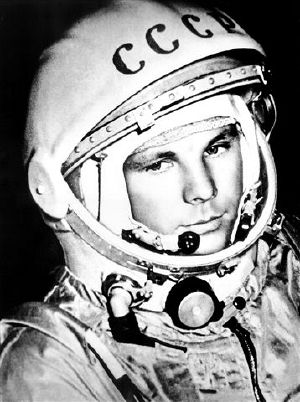 Gagarin in his space suit

On April 12, 1961, Gagarin became the first human to travel into space in Vostok 3KA-2 (Vostok 1) and return. His call sign in this flight was Kedr (Cedar) (Russian: Кедр).[4] During his flight, Gagarin famously whistled the tune "The Motherland Hears, The Motherland Knows" (Russian: "Родина слышит, Родина знает").[5][6] The first two lines of the song are: "The Motherland hears, the Motherland knows/Where her son flies in the sky".[7] This patriotic song was written by Dmitri Shostakovich in 1951 (opus 86), with words by Yevgeniy Dolmatovsky.

Legend has it that from orbit Gagarin made the comment, "I don't see any God up here." There are, however, no such words in the full verbatim record of Gagarin's conversations with the Earth during the spaceflight.[8] In a 2006 interview a close friend of Gagarin, Colonel Valentin Petrov, stated that Gagarin never said such words, and that the phrase likely originated from Nikita Khrushchev's speech at the plenum of the Central Committee of the CPSU, where the anti-religious propaganda suited party goals. In a certain context Khrushchev said, "Gagarin flew into space, but didn't see any God there".[9] Colonel Petrov also said that Gagarin had been baptized into the Orthodox Church as a child.

While in orbit Gagarin was promoted "in the field" from the rank of Senior Lieutenant to Major—the rank which TASS used in its announcement of Gagarin's triumphant flight.

After Gagarin's safe return, Soviet Premier Nikita Khrushchev rushed to his side and Gagarin issued a statement praising the Communist Party of the Soviet Union as the "organizer of all our victories." Gagarin immediately became a national hero. Major newspapers all around the globe published his biography and details of his flight. Moscow (and other large cities in USSR) held parades, the scale of which were second only to WWII Victory Parades.

Gagarin was escorted in a long motorcade of high-ranking officials through the streets of Moscow to the Kremlin where, in a lavish ceremony, he was awarded the highest Soviet honor, the title of Hero of the Soviet Union, by the Soviet leader Nikita Khrushchev. Khrushchev saw Gagarin's achievement as a vindication of his policy of strengthening the Soviet Union's missile forces at the expense of conventional arms. This policy antagonized the Soviet military establishment and contributed to Khrushchev's eventual downfall.

After the flight, Gagarin became an instant, worldwide celebrity, touring widely with appearances in Italy, Great Britain[10], Germany, Canada, and Japan to promote the Soviet achievement.

In 1962, he began serving as a deputy to the Supreme Soviet. He later returned to Star City, the cosmonaut facility, where he worked on designs for a reusable spacecraft. Gagarin worked on these designs in Star City for seven years. Gagarin became Lieutenant Colonel (or Podpolkovnik) of the Soviet Air Force on June 12, 1962 and on November 6, 1963 he received the rank of Colonel (Polkovnik) of the Soviet Air Force.[3] Wary of losing their hero in an accident, Soviet officials tried to keep him away from any flights. Gagarin was backup pilot for Vladimir Komarov in the Soyuz 1 flight. After Komarov's flight ended in a fatal crash, Gagarin was ultimately banned from the space program for his protection. 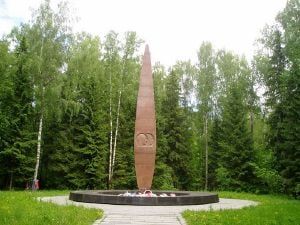 Gagarin then became deputy training director of Star City. At the same time, he began to re-qualify as a fighter pilot. On March 27, 1968, he and his instructor died in a MiG-15UTI on a routine training flight near Kirzhach. It is not certain what caused the crash, but a 1986 inquest suggests that the turbulence from a Su-11 'Fishpot-C' interceptor using its afterburners may have caused Gagarin's plane to go out of control. Weather conditions were also poor, which may have contributed to the inability of Gagarin and the instructor to correct before they crashed.

In his book, Two Sides of the Moon, Alexei Leonov recounts that he was flying a helicopter in the same area that day when he heard "two loud booms in the distance." Corroborating the above hypothesis, his conclusion is that a Sukhoi jet (which he identifies as a Su-15 'Flagon'), flying below its minimum allowed altitude, "without realizing it because of the terrible weather conditions, passed within 10 or 20 meters of Yuri and Seregin's plane while breaking the sound barrier." The resulting turbulence would have sent the MiG into an uncontrolled spin. Leonov believes the first boom he heard was that of the jet breaking the sound barrier, and the second was Gagarin's plane crashing.[11] All found parts of the wrecked MiG-15UTI were collected and are stored in sealed barrels.

A new theory, advanced by the original crash investigator in 2005, hypothesizes that a cabin vent was accidentally left open by the crew or the previous pilot, thus leading to oxygen deprivation and leaving the crew incapable of controlling the aircraft.[12]

Gagarin is buried next to Seregin in the walls of the Kremlin on Red Square. 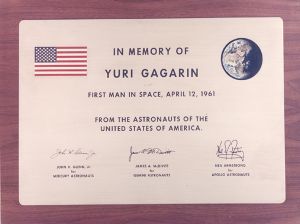 Yuri Gagarin Memorial Plaque, presented to the Soviet Union on January 21, 1971. Accepting the plaque at the Moscow ceremony was Soviet Gen. Nikolai Kuznetsov, commander of the Soviet Union's Star City space base, where cosmonauts have been training since 1960.

Cosmonautics Day (Russian: День Космонавтики) is a holiday celebrated (mainly in Russia) every April 12 to commemorate Gagarin's first manned earth orbit. It was established in the USSR on April 9, 1962 just prior to the first anniversary of Gagarin's flight.

On Cosmonautics Day, the commemoration ceremony starts in the city of Korolyov, near Gagarin's statue. Participants then proceed under police escort to Red Square for a visit to Gagarin's grave in the Kremlin Wall Necropolis, and continue to Cosmonauts Alley, near the Monument to the Conquerors of Space. Finally, the festivities are concluded with a visit to the Novodevichy Cemetery.

The goal of Yuri's Night is to increase public interest in space exploration and to inspire a new generation of explorers. Driven by space-inspired artistic expression and culminating in a worldwide network of annual celebrations and educational events, Yuri's Night creates a global community of young people committed to shaping the future of space exploration while developing responsible leaders and innovators with a global perspective. These global events are a showcase for elements of culture that embrace space including music, dance, fashion, and art.