The Yurok, whose name means "downriver people," are Native Americans whose ancestors have long lived along the Klamath River and the Trinity River, its longest tributary, near the Pacific coast of Northern California. They are known as fishermen, basket weavers, canoe makers, storytellers, dancers, and healers.

Following encounters with white settlers moving into their lands during the California Gold Rush in 1849, the Yurok were faced with disease and massacres that drastically reduced their population. In 1855, most of those that remained were forcibly relocated to the Yurok Indian Reservation on the Klamath River. Despite this period in which their language and culture was suppressed, almost to extinction, revitalization occurred in the latter part of the twentieth century. Efforts have been made to revive, or at least preserve, the apparently moribund Yurok language. The knowledge and beliefs of the Yurok have also re-emerged. Traditional dances, such as the Brush Dance for healing, the Jump Dance and the White Deerskin Dance, two of the most sacred religious ceremonies and part of the World Renewal cycle, are now held in several communities. Model villages, open to visitors, have been constructed, which not only preserve valuable elements of Yurok traditions and lifestyle but also offer them to all who are interested to learn from them, inheriting the wisdom of the past in order to build a better future.

First contact was with Spanish explorers in the sixteenth century, but no continuous interaction occurred until the nineteenth century when American expeditions began to trade with them for furs. In the 1820s, reports from Jedediah Smith's expeditions resulted in an increase in the number of trappers exploring and settling the area.

The California gold rush of 1849 led to great numbers of settlers moving to the area. Mining efforts led to destruction of villages and encounters led to hostilities. By the end of the gold rush era, around 75 percent of the Yurok had perished due to conflict or disease and the Yurok had lost most of their land.

In 1855, the Yurok Reservation was established in an area considerably smaller than their ancestral territory, and Yurok people were required to stay within its boundaries. With the establishment of Fort Terwer, Yurok were forced to learn English. When the fort was destroyed, Yurok children were sent to boarding schools on the Hoopa Valley Reservation and were taught by missionaries who not only imposed English language but also Christian beliefs and culture. Children were punished for using the Yurok language and observing traditional ways. This period was one in which the Yurok language and culture almost became extinct.

Yurok in a canoe. 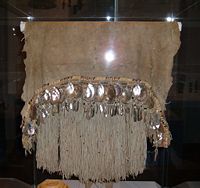 Yurok, Karuk dance skirt (late 1800s) made of leather, abalone, pine nuts, beads, and metal on display at the Iris & B. Gerald Cantor Center for Visual Arts on the Stanford University campus in Stanford, California.

The Yurok, like the Hupa and the Karuk, lived a hunter-gatherer subsistence lifestyle. Acorns were a staple, and were ground and stored as flour. They also fished for salmon in the Klamath River and its tributary, the Trinity River. The Yurok are known for their skills in canoe making and especially basketry (O'Neale 2007).

The redwood tree has been central to Yurok culture. Their family homes and sweat lodges were made from the redwood, as were their canoes. The redwood was regarded as a sacred living creature, to be revered and respected as well as put into service for the good of the tribe.

Traditionally, dentalia shells harvested from the ocean were used for money, and as ceremonial decorations. Woodpecker scalps and deerskins were also highly valued. Acquiring wealth was important, and the Yurok, unlike other Native Americans, had private ownership of land. Land was counted as wealth, and could be sold to one another (Waldman 2006).

The traditional language of the Yurok, known as Yurok (also Weitspekan) is an endangered Algic language. The standard reference on the Yurok language is the grammar by Robins (1958). The great majority of Yurok now speak English. At the beginning of the twenty-first century, among the speakers of the Yurok language were 75 individuals between the ages of 5 and 17, including 10 with limited English proficiency.

Yurok traditional narratives include myths, legends, tales, and oral histories preserved by the Yurok people. Their oral literature, together with the similar narratives of the Karuk and Hupa, constitutes a distinctive variant within Native California, with significant links to the tribes of the Northwest Coast. However, they did not practice the traditional potlatch, masked dancing, or totem pole carving typical of the Northwest Coast tribes. 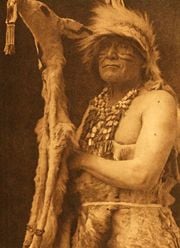 Traditional Yurok beliefs involve rituals to engage supernatural aid for healing and for public welfare. Vision quests, particularly to sacred sites high on the mountains of what is now part of the Six Rivers National Forest were an important part of Yurok life. Yurok, like the Karuk and Hupa, practice the World Renewal ceremonies. These rituals are intended to maintain the natural world and to ensure a continuation of the earth's resources—providing food and promoting tribal well-being. They also afforded opportunities for displays of wealth and elaborate costuming. Dancers in the White Deerskin dance wear regalia of deer hide or civet cat, dentalia necklaces, and wolf-fur bands around their forehead, while carrying poles mounted with a stuffed deer. The Jump Dance regalia includes a headdress consisting of large woodpecker scalps, long white feathers, strings of dentalia, and a deerskin robe.

Yurok spirituality can be understood as an arena in which:

… individual and society meet in dialogue—cooperating, resisting, negotiating, changing each other in manifold ways. "Culture," here, is not a thing but a process, and emergence through time (Buckley 2002).

Shamans were believed to have the power to cure disease; this power being given only to women. Spiritual aid was invoked through ritual, medicine songs, which often had a "sobbing" vocal quality, and spoken formulas (Keeling 1993). The Brush dance is a special ceremony held to heal a sick child. Conducted by the shaman, the family of the sick person hosted the dance which often took place in their home, the roof of the plank house being removed. Members of the tribe, and other local tribes would participate, or just spectate, as the dance continued all night.

The U.S. Census for the year 2000 indicated that there were 4,413 Yurok living in California, combining those of one tribal descent and those with ancestors from several different tribes and groups. There were 5,793 Yurok living in all of the United States.

Despite the dark period of Yurok history in which their language and culture was suppressed, almost to extinction, revitalization occurred in the latter part of the twentieth century.

Efforts have been made to revive the apparently moribund Yurok language. The Yurok Tribe developed a language program in the 1990s, using old recordings of native speakers as well as the few remaining native speakers to teach young people. The Yurok Language Project, established at University of California Berkeley, with the goal of contributing language-learning material to Yurok language revitalization programs sponsored by the Yurok Tribe language office and others, both on and off the reservation. They have gathered material on the Yurok language together into a single digital archive, incorporating material from as early as 1850 to the present day. They also published a dictionary in 2005. Much of the material is available on the internet.

The knowledge and beliefs of the Yurok have also re-emerged. Traditional dances, such as the Brush Dance for healing, the Jump Dance and the White Deerskin Dance, two of the most sacred religious ceremonies and part of the World Renewal cycle, are now held in several communities. They are also performed at Sumeg Village, a demonstration village at Patrick's Point State Park reconstructed on the site of a former Yurok seasonal fishing camp. This location is significant in Yurok traditional beliefs as the last place where "the immortals," supernatural beings who once lived throughout their land, remained after the Yurok people arrived (Walters 2006).

Other efforts to revive and spread Yurok culture include the development of a traditional Yurok village on the Klamath River, the Blue Creek—Ah Pah Village. It is intended to include all aspects of traditional Yurok culture, and through blending traditional and modern knowledge, practice, and technology the creators of the village plan to make it self-sustaining.