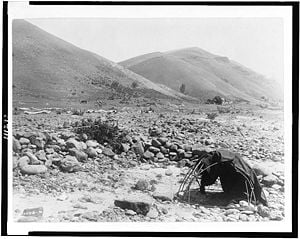 The sweat lodge (also called purification ceremony, sweat house, medicine lodge, medicine house, or simply sweat) is a ceremonial sauna and is considered an important tradition in some Native American cultures. Sweats are often done for purification, both physical and spiritual. It may be a deeply spiritual experience. Others participate for social and cultural reasons.

There are risks involved in the use of sweat lodges, especially when run by unauthorized and untrained persons. When organized with due respect to the process in both its physical and cultural aspects, sweat lodges offer valuable experiences for many. 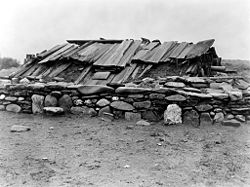 Sweat lodges can be constructed in a variety of styles. They may be fashioned as a domed or oblong hut similar to a wickiup (or wigwam), of a size large enough to accommodate several people. Even a simple hole dug into the ground and covered with planks or tree trunks may be used. Stones are typically heated in an exterior fire before being placed in a central pit in the ground.[1] The stones are then sprinkled with water to generate steam.

Sweat lodges have been used for three main purposes[2]

Indigenous peoples of the Americas in many regions have employed the sweat lodge. This tradition goes back many hundreds of years. For example, Chumash peoples of the central coast of California built sweat lodges in coastal areas in association with habitation sites dated back to between 800 to 1200 C.E.[3] Many tribes continue to use the sweat lodge today. 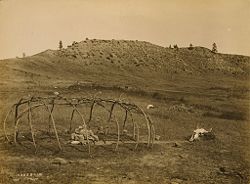 Rituals and traditions vary from region to region and from tribe to tribe. They often include prayers, drumming, and offerings to the spirit world. In some cultures a sweat-lodge ceremony may be a part of another, longer ceremony such as a Sun Dance. Some common practices and key elements associated with sweat lodges include:

The most important part of sweat lodge etiquette is respecting the traditions of the lodge leader. It is important to know what is allowed and expected before entering a lodge. Traditional tribes hold a high value of respect to the lodge. Some sweats take place in complete silence, while others involve singing, chanting, drumming, or other sounds. In some cultures objects, including clothing, without a ceremonial significance are discouraged from being brought into the lodge. Most traditional tribes place a high value on modesty as a respect to the lodge. In clothed lodges, women are usually expected to wear skirts or short-sleeved dresses of a longer length. In some traditions, nudity is forbidden, as are mixed gender sweats, whereas in others nudity is considered to have a greater connection with the spiritual aspect of the sweat. Some lodge leaders do not allow menstruating women. Perhaps the most important piece of etiquette is gratitude. It is important to be thankful to the purpose of the sweat, the other participants, and those helping to support the sweat lodge.

The full ceremony is not taught to non-Lakotas, but in rough detail it involves an I-ni-pi lodge - a frame of saplings covered with hides or blankets. Stones are heated in a fire, then placed into a central pit in the lodge. Water is then poured on the stones to create hot steam. Traditional prayers and songs are offered in the Lakota language.

Those who have inherited and maintained these traditions have issued statements about the standards to be observed in the I-ni-pi.[5][6]

At the Lakota Summit V on June 10, 1993, an international gathering of US and Canadian Lakota, Dakota, and Nakota Nations, about 500 representatives from 40 different tribes and bands of the Lakota unanimously passed a "Declaration of War Against Exploiters of Lakota Spirituality." Among other things, it specifies that these ceremonies are only for those of the Lakota, Dakota, and Nakota Nations.[6]

In a March 2003 meeting of the spiritual leaders and Bundle Keepers of the Lakota, Dakota, Nakota, Cheyenne, and Arapahoe Nations it was agreed that:

I-ni-pi (Purification Ceremony): Those that run this sacred rite should be able to communicate with Tun-ca-s'i-la (our Sacred Grandfathers) in their Native Plains tongue. They should also have earned this rite by completing Han-ble-c'i-ya and the four days and four years of the Wi-wanyang wa-c'i-pi.[5] 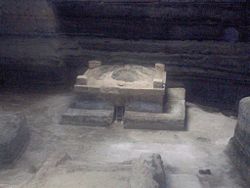 A temazcal (also written as temezcal, temascal, or temescal) is a type of sweat lodge which originated with pre-Hispanic Indigenous peoples in Mesoamerica. The word temazcal comes from the Nahuatl (Aztec) word temazcalli which comes from two words, temas which means bath (or teme to bathe), and calli meaning house.[7][8] The Mayans called these sweat baths Zumpul-che, meaning "a bath for women after childbirth and for sick persons used to cast out disease in their bodies."[8]

The temazcal sweatlodge in Mesoamerica is usually a permanent structure, unlike in other regions. Constructed from volcanic rock and cement it is usually a circular dome, although rectangular ones have been found at certain archeological sites. To produce the heat, volcanic stones, which do not explode from the high temperature, are heated and then placed in a pit located in the center or near a wall of the temazcal.

In ancient Mesoamerica the temazcal was used as part of a curative ceremony thought to purify the body after exertion such as after a battle or a ceremonial ball game. It was also used for healing the sick, improving health, and for women to give birth. It continues to be used today for spiritual and health reasons in Indigenous cultures of Mexico and Central America that were part of the ancient Mesoamerican region.

The temazcal involved the worship of a goddess, Temazcalteci, "the grandmother of the baths," and incorporated all the elements of Aztec mythology. The Spanish colonialists, horrified at the idea of people of both genders bathing naked together and participating in what they assumed to be immoral acts, determined to eradicate this practice that was so closely connected to pagan beliefs. Despite their best efforts, however, the temazcal survived, practiced secretly in remote locations.[7] It is currently being recovered by all sectors of society in that part of the world and is used as a cleansing of mind, body, and spirit.

Sweat Lodges in Other Cultures

Did you know?
Many cultures have used sweat lodges for the purpose of purification, healing, and relaxation

Sweat lodges have been used in the northern cultures not only of the Americas but also Europe.[2] One of the early European occurrences can be found in the fifth century B.C.E., when Scythians constructed pole and woolen cloth sweat baths for purification purposes, particularly following a death.[9] Vapor baths are also documented in Roman times by Vitruvius.

In Ireland a beehive shaped sweat lodge was commonly used through the eighteenth and even nineteenth centuries, especially as a cure for rheumatism.[2] In Northern European cultures, such as in Finland where they are known as saunas, sweat lodges were and are common and have ceremonial and therapeutic aspects. In Russia, too, ceremonial sweat baths were commonly used by the peasants for purification.[2]

The "Turkish bath," similar to a sauna or Russian sweat bath but related to ancient Greek and ancient Roman bathing practices, was introduced into Great Britain by David Urquhart, a diplomat and politician, and Richard Barter, an Irish physician, who read Urquhart's The Pillars of Hercules and worked with him to construct the first such bath in the mid-nineteenth century.

Wearing metal jewelry can be dangerous since metal objects may become hot enough to burn the wearer. Contact lenses and synthetic clothing should not be worn in sweat lodges as the heat can cause the materials to melt and adhere to eyes or skin.[11]

Care must be taken in selecting rocks used for heating. They should be dry and without air pockets, as these will crack and possibly explode in the fire or when hit by water. There is also a risk posed by modern chemical pesticides, or inappropriate woods, herbs, or building materials being used in the lodge.

Even people who are experienced with sweats, and attending a ceremony led by a properly-trained and authorized Native American ceremonial leader, could suddenly experience problems due to underlying health issues.

There have been reports of sweat lodge-related deaths resulting from overexposure to heat, dehydration, smoke inhalation, or improper lodge construction leading to suffocation.[12][13] In October 2009, during a New Age retreat organized by James Arthur Ray, three people died and 21 more were sickened from an overcrowded and improperly set up sweat lodge containing some 60 people and located near Sedona, Arizona.[14]

As Keeper of our Sacred White Buffalo Calf Pipe Bundle, I am concerned for the 2 deaths and illnesses of the many people that participated in a sweat lodge in Sedona, Arizona that brought our sacred rite under fire in the news. I would like to clarify that this lodge and many others, are not our ceremonial way of life, because of the way they are being conducted. My prayers go out for their families and loved ones for their loss.


Our ceremonies are about life and healing, from the time this ancient ceremonial rite was given to our people, never has death been a part of our inikag’a (life within) when conducted properly. Today the rite is interpreted as a sweat lodge, it is much more then that. So the term does not fit our real meaning of purification. ...


Our First Nations People have to earn the right to pour the mini wic'oni (water of life) upon the inyan oyate (the stone people) in creating Inikag'a - by going on the vision quest for four years and four years Sundance. Then you are put through a ceremony to be painted - to recognize that you have now earned that right to take care of someone's life through purification. They should also be able to understand our sacred language, to be able to understand the messages from the Grandfathers, because they are ancient, they are our spirit ancestors. They walk and teach the values of our culture; in being humble, wise, caring and compassionate. What has happened in the news with the make shift sauna called the sweat lodge is not our ceremonial way of life![15]

The Native American community actively seeks to prevent abuses of their traditions and have been discussing ways to formalize guidance and oversight to authentic or independent lodge leaders.[15] The ceremony should only be in sanctioned lodge carriers' hands from legitimate nations. Traditionally, a typical leader has four to eight years of apprenticeship before being allowed to care for people in a lodge, and has been officially recognized as ceremonial leader before the community.[15]