Sweat or perspiration is a watery fluid excreted by the sweat (sudoriparous) glands of the skin of mammals. Sweat contains primarily water, but also salts and metabolic waste products—primarily sodium chloride, urea, lactic acid, and potassium ions (Blood et al. 2007). Sweat serves an excretory function for releasing excess water and waste products. In some animals, and in particularly humans, it also plays a role in regulating body temperature through evaporative cooling when the water in the sweat evaporates. The urocanic acid in sweat also may offer protection for the skin against ultraviolet radiation (Kent 2006).

Sweating (as well as perspiration) refers to the production, secretion, and evaporation of sweat. The importance of sweating varies between species.

Sweating is part of the intricate complexity of animals. In humans, it is part of a carefully coordinated process, controlled by the hypothalamus, to regulate body temperature. Furlow (2004) also summarizes some recent scientific evidence that molecules in the sweat from apocrine glands may be involved in a women's selection of a potential mate, guiding them toward those with genetically different MHC (major histocompatibility complex) profiles and ones potentially better for having healthy offspring.

The sympathetic nervous system regulates sweating, although the process can be stimulated by parasympathetic drugs (Stocking and Gubili 2004).

Sweating can serve both an excretory role (nitrogenous excretion, removal of excess water, and so forth) and a role in temperature regulation. However, its importance for evaporative cooling varies greatly between species, with a much greater role in humans than in domestic animals (Blood et al. 2007). Among domestic animals, cattle have a high sweat rate of about 150 g/m2/h at 40 degrees centigrade, while sheep lose but 32 g/m2/h and dogs lose but an insignificant amount (Blood et al. 2004). Horses may have the highest rate of all (Blood et al. 2004). Primates have armpits that sweat similarly to those of humans. Animals with few sweat glands, such as dogs, accomplish similar temperature regulation results by panting, which evaporates water from the moist lining of the oral cavity and pharynx.

It has also been proposed that components of male sweat can act as pheromonal cues (Wyart et al. 2006), and that the urocanic acid in sweat may help to protect the skin against the destructive action of ultraviolet radiation (Kent 2006). 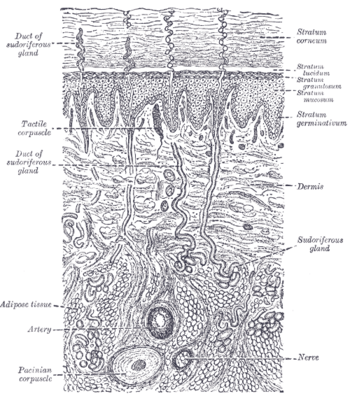 In humans, there are two main kinds of sudoriferous or sweat glands, which differ greatly in both the composition of the sweat and its purpose:

In addition, there are two other sudoriferous glands, which will not be discussed here, that produce a type of modified sweat:

Eccrine sweat glands are distributed over almost the entire surface of the body in humans and many other species, but are lacking in some marine and fur-bearing species. In humans, they are particularly abundant on the palms of hands, soles of feet, and on the forehead. These produce sweat that is composed chiefly of water with various salts. These glands are used for body temperature regulation.

Eccrine sweat glands are coiled tubular glands derived from the outer layer of skin but extending into the inner layer. The sweat glands are controlled by sympathetic cholinergic nerves, which are controlled by a center in the hypothalamus. The hypothalamus senses core temperature directly, and also has input from temperature receptors in the skin and modifies the sweat output, along with other thermoregulatory processes.

Human eccrine sweat is composed chiefly of water with various salts and organic compounds in solution. It contains minute amounts of fatty materials, urea, and other wastes. The concentration of sodium varies from 35–65 mmol/l and is lower in people accustomed to a hot environment. The sweat of other species generally differs in composition.

Sweating occurs even in cool weather but is particularly pronounced in hot or humid conditions and during periods of stress or physical exertion.

Apocrine sweat glands are limited to only certain locations in humans, unlike eccrine glands, and they do not function in thermoregulation but rather serve as scent glands. They are mainly present in the armpits and around the anogenital area, as well as the ears, hands, cheeks, navel, and breast areolas. They develop during the early to mid puberty ages, approximately around the age of 13-15.

Emotional stress, nervousness, and excitement increases the production of sweat from the apocrine glands, or more precisely, the sweat already present in the tubule is squeezed out. Apocrine sweat glands essentially serve as scent glands. During exercise or in hot or humid conditions, the copious sweating in the armpits is not from the apocrine glands but actually from eccrine glands located in the same region.