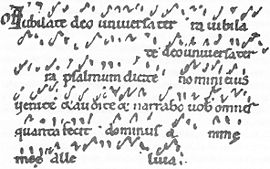 Chant is the rhythmic speaking or singing of words or sounds, often primarily on one or two pitches (reciting tones). Chants may range from a simple melody involving a limited set of notes to highly complex musical structures, often including a great deal of repetition of musical subphrases, such as Great Responsories and Offertories of Gregorian chant. Chant may be considered speech, music, or a heightened or stylized form of speech. In the later Middle Ages some religious chant evolved into song (forming one of the roots of later Western music).

When performing a chant, the singer usually uses music and sacred texts to create a dialogue with the spiritual world. Such dialogue usually consists of warm repeated tones while saying the name of God (or other spiritual beings). Chant ultimately can create vibrations which may affect the body and the mind. This culmination of chant can help the opening of one's heart and bring calmness to oneself. These are the spiritual principles which can prepare one for a life in the spiritual world.

Chant as a spiritual practice

Chanting the name of God is a spiritual activity that is commonly practiced. Chants form parts of many religious rituals and diverse spiritual traditions. Many consider chants to be a route to spiritual development. Some examples include chant in African and Native American tribal cultures, Gregorian chant, Vedic chant, Jewish liturgical music (chazzanut), Qur'an reading, Baha'i chants, Buddhist chants, and mantras. Chants are also used for psalms and prayers in Roman Catholic, Eastern Orthodox, Lutheran, and Anglican churches (see Anglican chant). Tibetan Buddhist chant involves throat singing, where multiple pitches are produced by each performer. The concept of chanting mantras is of particular significance in many Hindu traditions and other closely related Dharmic religions. For example, the Hare Krishna movement is based specially on the chanting of Sanskrit names of God. Japanese Shigin (詩吟), or "chanted poetry," mirrors Zen principles and is sung from the gut—the locus of power in Zen Buddhism.

The Notation of Chants

Chants were derived to enhance the parts in sacred ceremonies and religious services. Such music created the mood and atmosphere for rituals and prayers at these various events. The chants were unwritten and passed down from generation to generation through repetition and memorization. As the religious services became longer and more complicated, a way of notating the chants was needed to ensure uniformity of ritual and a facility in performance. Some of the earliest manuscripts of chant notation were from the ninth century and depicted Gregorian chants. Chant notation started with notes or neumes which had no staff. The neumes gave some hint as to the intonation and the rhythm to be used; only rarely did they have a flat or natural sign by them to indicate whether a note was flat or natural. Staff notation was evidenced in the twelfth century with neumes that were on or in between lines that gave a performer more of an indication as to the exact tone that was needed for the chant. Guido d'Arezzo was influential in providing the placement of notes on a staff to facilitate the memorization and performance of sacred chants.

Other uses of chant

Chants are used in a variety of settings from ritual to recreation. In sports contests, supporters and players have been known to use them (see football chant). Warriors also utilized chant in ancient times through means of a battle cry. They are also used in protests and are widely adapted with only a few words changed between topics.

Various musical genres such as hardcore, grindcore, and other aggressive forms of music have recently adopted this concept. Many times during a "breakdown" (the segment of the song where the time signature is half counted or significantly slowed in some way). The singer will then recite a chant to get the audience involved and create a feeling of passion throughout the room causing overall reaction to the music (sometimes including mosh pits to be more intense).