Statue of Guido in Arezzo.

Guido of Arezzo, Guido Aretinus, Guido da Arezzo, Guido Monaco or Guido D'Arezzo (991/992 – 1033) was a music theorist of the Medieval music era. He is regarded as the inventor of modern musical notation (staff notation) that replaced neumatic notation. His text, the Micrologus, was the second-most-widely distributed treatise on music in the Middle Ages (after the writings of Boethius).

Guido d'Arezzo used his notational invention and music theoretical treatise as the foundation for creating a system that made the use of music as a devotional tool easier and facilitated the display of one's harmony with the spiritual and humanistic worlds.

Guido was a monk of the Benedictine order from the Italian city-state of Arezzo. Recent research has dated his Micrologus to 1025 or 1026. Since Guido stated in a letter that he was 34 when he wrote it, his birth date is presumed to be around 991 or 992. His early career was spent at the monastery of Pomposa, on the Adriatic coast near Ferrara. While there, he noted the difficulty that singers had in remembering Gregorian chants by rote memorization especially when the liturgy was rapidly expanding and there were more feast days added to the calendar. He came up with a method for teaching the singers to learn chants in a short time without the use of a 'master' to teach them, and quickly became famous throughout northern Italy. Unfortunately, he attracted the envy and hostility of the other monks at the abbey, prompting him to move to Arezzo, a town which had no abbey, but which did have a large group of singers needing training.

While at Arezzo, he developed new technologies for teaching. These were the staff notation and solfeggio (the "do-re-mi" scale, whose syllables are taken from the initial syllables of each of the first six musical phrases of the first stanza of the hymn, Ut queant laxis). This may have been based on his earlier work at Pomposa, but the antiphoner that he wrote there is lost. Guido is also credited with the invention of the 'Guidonian hand', a widely used mnemonic system where note names are mapped to parts of the human hand. The Micrologus, written at the cathedral at Arezzo, contains Guido's teaching method as it had developed by that time. Soon it had attracted the attention of Pope John XIX, who invited Guido to Rome. Most likely he went there in 1028, but he soon returned to Arezzo, due to his poor health. Nothing is known of him after this time, except that his lost antiphoner was probably completed in 1030. 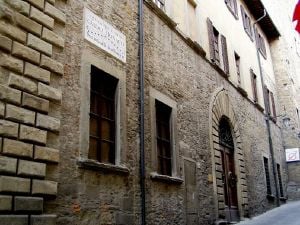 A few revealing events suggest that Guido may have been a great synthesizer of musical innovations that were circulating in his time.

Guido may well have been influenced by Islamic symbols, especially in his use of syllables for naming notes of the musical scale. Soriano revealed that Guido had studied in Catalogna, a region neighboring Andalusia which was renowned for teaching music in its colleges as early as the ninth century. Ibn Farnes (d.888), for example, was the first to introduce music as an integral part of the department of the quadrivium (traditionally, arithmetic, geometry, music, and astronomy). The famous musician Zariyab (789-857) was also renowned for his teaching of music in Spain as well as for laying the foundation of the first conservatory in the world. Evidence shows at least one scholar who, after acquiring a vast knowledge of musical art from the Muslims, taught in European circles. Gerbert of Aurillac (later Pope Sylvester II) (d.1003), known for playing an important part in the renewal of scientific thought in Europe, was also influential in disseminating Muslim musical knowledge, including their musical theory. He studied in Andalusia and was nicknamed 'The Musician'. Gerbert also taught in the quadrivium.

Gerbert taught the Arabic numerals. Evidence of this is found in "Cita et vera divisio monochordi in diatonico genere," which was a work of Bernelius (c.990) who was his former pupil. This work contained the Arabic numerals. This teaching was soon spread abroad by Gerbert's pupils, Bernelius, Adalboldus (d.1027) and Fulbertus (d.1028). These numerals are also found in Pseudo-Odo of Cluny (d.942) in a tract entitled "Regulae Domni Oddonis super abacum." Odo of Cluny, in discussing the eight tones, referred to Arabic and Jewish names including 'buq', 're', 'schembs' and so on. Meanwhile, Fulbertus is known to have taught in Chartres, and it is assumed that musical knowledge must have taken similar courses.

Hunke established that these Arabic syllables were found in an eleventh century Latin treatise produced in Monte Cassino, a place which had been occupied by the Muslims a number of times. It also was the retiring place of Constantine the African, the great Tunisian scholar who migrated from Tunis to Salerno and then to Monte Cassino. It is very unlikely that Guido, the monk, would have missed this treatise.

Guido of Arezzo is also the namesake of GUIDO Music Notation, a format for computerized representation of musical scores.

Retrieved from https://www.newworldencyclopedia.org/p/index.php?title=Guido_d%27Arezzo&oldid=1005607
Categories:
Hidden category:
This page was last edited on 18 July 2017, at 19:00.
Content is available under Creative Commons Attribution/Share-Alike License; additional terms may apply. See Terms of Use for details.