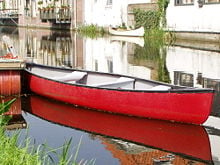 A canoe is a small, narrow boat, typically human-powered, but it may also have a sail. Canoes are pointed at both ends and usually open on top, but can be covered.

In its human-powered form, the canoe is propelled by the use of paddles, with the number of paddlers depending on the size of the canoe—most commonly two. Paddlers face in the direction of travel, either seated on supports in the hull, or kneeling directly on the hull. In this way, paddling a canoe can be contrasted with rowing, where the rowers face away from the direction of travel. Paddles may be single-bladed or double-bladed.

Sailing canoes are propelled by any of a variety of sailing rigs. Common classes of modern sailing canoes include the 5m² and the international 10m² sailing canoes. The latter, otherwise known as the International Canoe, is one of the fastest and oldest competitively sailed boat classes in the western world.

Ambiguity over the word canoe

The sport of canoeing, organized at the international level by the International Canoe Federation, uses the word canoe to cover both canoes as defined here, and kayaks (see below for a brief description of the differences between a kayak and a canoe). In fact, the sport of canoe polo is exclusively played in kayaks.

The first use of the word canoe by a European, originally from the Arawak word "canoa" in the Caribbean Sea, was by Christopher Columbus. Later Garcilaso de la Vega defined it as an open boat, but the British used it for all boats of the Indigenous peoples of the Americas. This use of canoe to generically cover both canoes and kayaks is not so common in North American usage, but is common in Britain, Australia and presumably many parts of the world, both in sporting jargon and in colloquial speech. In these circumstances, the canoe as defined here is sometimes referred to as an open, Canadian, or Indian canoe, though these terms have their own ambiguities.

A 'canoe' in this ambiguous sense is a paddled vessel in which the user faces the direction of travel.

Parts of a canoe

Optional features in modern canoes (not shown in diagram):

The portion of the hull between the waterline and the top of the gunwale is called freeboard.

The earliest canoes were made from natural materials:

Modern technology has expanded the range of materials available for canoe construction.

Depending on the intended use of a canoe, the various kinds have different advantages. For example, a canvas canoe is more fragile than an aluminum canoe, and thus less suitable for use in rough water; but it is quieter, and so better for observing wildlife. However, canoes made of natural materials require regular maintenance, and are lacking in durability.

Many canoes are symmetrical about the centerline, meaning their shape can be mirrored along the center. When trimmed level (rarely the case) they should handle the same whether paddling forward or backward. Many modern designs are asymmetrical, usually having the widest beam slightly farther aft which improves efficiency and promotes more level fore and aft trim. A further improvement may be found in canoes with a straighter hull profile aft and rocker forward which improves tracking.

A traditionally shaped canoe, like a voyageur canoe, will have a tall rounded bow and stern. Although tall ends tend to catch the wind, they serve the purpose of shedding waves in rough whitewater or ocean travel.

The shape of the hull's cross section significantly influences the canoe's stability under differing conditions. Flat-bottomed canoes generally have excellent initial stability, which diminishes rapidly with increased heel. Their high initial stability causes them to have a more abrupt motion in waves from the side.

For a given beam, a rounded-bottom canoe will have less initial stability than its flatter bottomed cousin. Round sections have lower surface area for a given volume and have less resistance through the water. They are most often associated with racing canoes.

In between the flat and rounded bottom are the more common shallow-arc and "V" bottom canoes which provide a compromise between performance and stability. The shallow-vee bottom, where the hull centerline forms a ridge like a shallow "V," will behave similar to a shallow-arc bottom but its volume to surface ratio is worse.

Similar is the tumblehome hull which has the top potion of the hull curving back in slightly.

Many modern canoes combine a variety of cross sections to suit the canoe's purpose.

Keels on canoes improve directional stability (the ability to 'track' in a straight line) but decrease the ability to turn quickly. Consequently, they are better suited for lake travel, especially when traveling on open water with crosswinds. Conversely, keels and "Vee"-bottoms are undesirable for whitewater because often quick turns are required.

In aluminum canoes, small keels occur as manufacturing artifacts when the two halves of the hull are joined. In wood-and-canvas canoes, keels are rub-strips to protect the boat from rocks and as they are pulled up on shore. Plastic canoes feature keels to stiffen the hull and allow internal tubular framing to lie flush with the sole of the canoe.

Curvature of the hull profile that rises up at the bow and stern is called "rocker." Increasing the rocker improves maneuverability at the expense of tracking. Specialized canoes for whitewater play have an extreme rocker and therefore allow quick turns and tricks. Rocker also has an immense effect on the stability of a Canadian canoe. By lifting the ends of the craft out of the water, rocker puts more of the wider centre section of the boat into the water, contributing significantly to the overall stability of the craft. 35mm rocker at each end makes all the difference to how safe a novice will feel in a canoe.

Modern cedar-strip canoes have gunwales which consist of inner and outer parts called "inwales" and "outwales." These two parts of the gunwale give rigidity and strength to the hull. The inwale will often have "scuppers" or slots cut into the inwale to allow water to drain when the canoe hull is turned upside down for storing.

In the past, people around the world have built very different kinds of canoes, ranging from simple dugouts to large outrigger varieties. More recently, technologically advanced designs have emerged for particular sports.

Early canoes have always incorporated the natural materials available to the local people. The different canoes (or canoe like) in many parts of the world were:

Modern canoe types are usually categorized by the intended use. Many modern canoe designs are hybrids (a combination of two or more designs, meant for multiple uses). The purpose of the canoe will also often determine the materials used. Most canoes are designed for either one person (solo) or two persons (tandem), but some are designed for more than two persons.

Differences from other paddled boats

Canoes have a reputation for instability, but this is not true if they are handled properly. For example, the occupants need to keep their center of gravity as low as possible. Canoes can navigate swift-moving water with careful scouting of rapids and good communication between the paddlers.

When two people occupy a canoe, they paddle on opposite sides. For example, the person in the bow (the bowman) might hold the paddle on the port side, with the left hand just above the blade and the right hand at the top end of the paddle. The left hand acts mostly as a pivot and the right arm supplies most of the power. Conversely, the sternman would paddle to starboard, with the right hand just above the blade and the left hand at the top. For travel straight ahead, they draw the paddle from bow to stern, in a straight line parallel to the gunwale.

A trick called "gunwale bobbing" or "gunwaling" allows a canoe to be propelled without a paddle. The canoeist stands on the gunwales, near the bow or the stern, and squats up and down to make the canoe rock backward and forward. This propulsion method is inefficient and unstable; additionally, standing on the gunwales can be dangerous. However, this can be turned into a game where two people stand one on each end, and attempt to cause the other to lose balance and fall into the water, while remaining standing themselves.

The paddling action of two paddlers will tend to turn the canoe toward the side opposite that on which the sternman is paddling. Thus, steering is very important, particularly because canoes have flat-bottomed hulls and are very responsive to turning actions. Steering techniques vary widely, even as to the basic question of which paddler should be responsible for steering.

Among less-experienced canoeists, the canoe is typically steered from the bow. The advantage of steering in the bow is that the bowman can change sides more easily than the sternman. Steering in the bow is initially more intuitive than steering in the stern, because to steer to starboard, the stern must actually move to port. On the other hand, the paddler who does not steer usually produces the most forward power or thrust, and the greater source of thrust should be placed in the bow for greater steering stability.

Paddle strokes are important to learn if the canoe is to move through the water in a safe and precise manner. Categorizing strokes makes it easier to learn them. After the strokes are mastered, they can be combined or even changed so that handling the canoe is smooth and done in an efficient, effective, and skillful manner. Here are the main types of strokes:

Complementary strokes are selected by the bow and stern paddlers in order to safely and quickly steer the canoe. It is important that the paddlers remain in unison, particularly in white water, in order to keep the boat stable and to maximize efficiency. There are some differences in techniques in how the above strokes are utilized.

On swift rivers, the sternman may use a setting pole. It allows the canoe to move through water too shallow for a paddle to create thrust, or against a current too quick for the paddlers to make headway. With skillful use of eddies, a setting pole can propel a canoe even against moderate (class III) rapids.