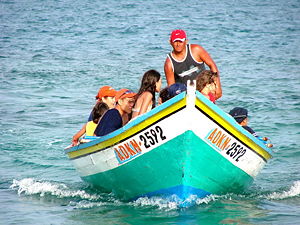 A wooden boat operating near shore.

A boat is a watercraft designed to float on and provide transport over water. It is usually operated on inland bodies of water (such as lakes or rivers) or in protected coastal areas. However, some boats, such as the whaleboat, were historically designed to be operated from a ship in an offshore environment.

In naval terms, a boat is small enough to be carried aboard another vessel (a ship). Notable exceptions to this size concept are the Great Lakes freighter, riverboat, narrowboat, and ferryboat. These are examples of large boats, but they generally operate on inland and protected coastal waters. Modern submarines may also be referred to as boats (despite their underwater capabilities and size), perhaps because early submarines could be carried by a ship and were not capable of making offshore passages on their own. Boats may have military, other government, research, or commercial usage; but a vessel, regardless of size, that is in private, non-commercial usage is almost always called a boat.

Boats of various types have been built and used since ancient history, allowing people to transport themselves and their cargo across large stretches of water without having to swim. In addition, they have been used for fishing. Large ships are usually equipped with small lifeboats that can be used for emergency evacuation of the passengers and crew. Also, in places where large ships cannot venture too close to the shore, small boats are used to shuttle people and their belongings between ship and shore.

A boat stays afloat because its weight is equal to that of the water it displaces. The material of the boat itself may be heavier than water (per volume), but it forms only the outer layer. Inside the boat is air, which is negligible in weight, but the air adds to the volume. The central term here is density, which is mass ('weight') per unit volume. The mass of the boat (including its contents) as a whole has to be divided by the volume below the waterline. If that figure is equal to the density of water (roughly one kilogram per liter), the boat will float. If weight is added to the boat, the volume below the waterline will have to increase too, to maintain the same average density. Consequently, the boat sinks a little to compensate.

Parts of a boat

A boat in an Egyptian tomb painting from about 1450 B.C.E.

The roughly horizontal, but cambered structures spanning the hull of the boat are referred to as the "deck." A ship often has several decks, but a boat is unlikely to have more than one. The similar but usually lighter structure that spans a raised cabin is a "coach-roof." The underside of a deck is the deck head.

The "floor" of a cabin is properly known as the sole, but it is more likely to be called the floor. (In proper terms, a floor is a structure that ties a frame to the keelson and keel.) The keel is a lengthwise structural member to which the frames are fixed (sometimes referred to as a backbone). The vertical surfaces dividing the internal space are bulkheads. 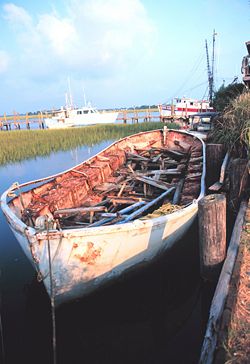 A ship's lifeboat, built of steel, rusting away in the wetlands of Folly Island, South Carolina, United States.

Until the mid-nineteenth century, most boats were made of all-natural materials, primarily wood. Many boats had been built with iron or steel frames but were still planked in wood. In 1855, ferro-cement boat construction was patented by the French. They called it Ferciment. This is a system by which a steel or iron wire framework is built in the shape of a boat's hull and covered (troweled) over with cement. Reinforced with bulkheads and other internal structure, it is strong but heavy, easily repaired, and, if sealed properly, will not leak or corrode. These materials and methods were copied all over the world, and have faded in and out of popularity to the present.

As the forests of Britain and Europe continued to be over-harvested to supply the keels of larger wooden boats, and the Bessemer Process (patented in 1855) cheapened the cost of steel, steel ships and boats began to be more common. By the 1930s, boats built of all steel from frames to plating were seen replacing wooden boats in many industrial uses, even the fishing fleets. Private recreational boats in steel are uncommon. In the mid-twentieth century, aluminum gained popularity. Though much more expensive than steel, there are now aluminum alloys available that will not corrode in salt water, and an aluminum boat built to similar load carrying standards could be built lighter than steel. The boat-building industry is now being dominated by fiberglass.

Platt Monfort invented Wire Plank(r)(1969), Fer-a-Lite(r)(1972), Str-r-etch Mesh(r)(1975), and Geodesic Airolite Boats(r)(1981). Fer-A-Lite(r) is a mixture of polyester resin, fiberglass, and a filler. This, along with Str-r-etch Mesh(r), could be used to build a boat in the same fashion as a ferro-cement boat, but the resulting hull would be much lighter and more resilient. Wire Plank(r) was first used in ferro-cement construction, but could also be used with Fer-a-Lite to create a medium to heavy weight hull. Geodesic Airolite Boats(r) are built using very lightweight wooden frames (geodesic) that are covered over with some lightweight heatshrinkable plastic or a synthetic fabric such as dacron coated with sealant. This tensioned skin adds to the overall strength of the structure and boats built thus are of the ultra-light variety. Boats come in many different shapes and sizes, so that some boats will be used perfectly against different types of waves.

Around the mid 1960s, boats made out of glass-reinforced plastic, more commonly known as fiberglass, became popular, especially for recreational boats. The coast guard refers to such boats as 'FRP' (for Fiberglass Reinforced Plastic) boats. Fiberglass boats are extremely strong, and do not rust, corrode, or rot. They are, however, susceptible to structural degradation from sunlight and extremes in temperature over their lifespan. Fiberglass provides structural strength, especially when long woven strands are laid, sometimes from bow to stern, and then soaked in epoxy or polyester resin to form the hull of the boat. Whether hand laid or built in a mold, FRP boats usually have an outer coating of gelcoat which is a thin solid colored layer of polyester resin that adds no structural strength, but does create a smooth surface which can be buffed to a high shine. One of the disadvantages of fiberglass is that it is heavy and to alleviate this, various lighter components can be incorporated into the design. One of the more common methods is to use cored FRP, with the core being balsa wood completely encased in fiberglass. Cored FRP is most often found in decking which helps keep down weight that will be carried above the waterline. While this works, the addition of wood makes the cored structure of the boat susceptible to rotting. The phrase 'advanced composites' in FRP construction may indicate the addition of carbon fiber, kevlar(tm) or other similar materials, but it may also indicate other methods designed to introduce less expensive and, by at least one yacht surveyor's eyewitness accounts,[1] less structurally sound materials.

Cold molding is similar to FRP in as much as it involves the use of epoxy or polyester resins, but the structural component is wood instead of fiberglass. In cold molding very thin strips of wood are laid over a form or mold in layers. This layer is then coated with resin and another directionally alternating layer is laid on top. In some processes the subsequent layers are stapled or otherwise mechanically fastened to the previous layers, but in other processes the layers are weighted or even vacuum bagged to hold layers together while the resin sets. Layers are built up thus to create the required thickness of hull.

People have even made their own boats or watercraft out of commonly available materials such as styrofoam or plastic, but most homebuilts today are built of plywood and either painted or covered in a layer of fiberglass and resin.

The most common means of propulsion are: 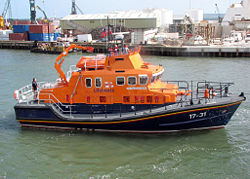 Severn class lifeboat in Poole Harbour, Dorset, England. This is the largest class of British lifeboats, at a length of 17 meters. 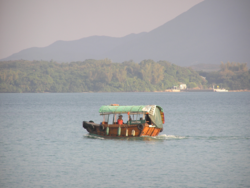 A passenger boat to the islands off the coast of the Sai Kung Peninsula of Hong Kong. 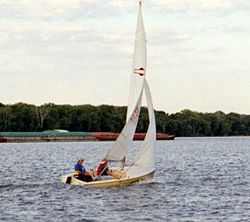 Unusual boats have been used for sports purposes. For example, "big bathtub races" use boats made from bathtubs. Pumpkins have been used as boats as in the annual Pumpkin Boat Race on Lake Otsego in New York state, USA. In this race, very large, hollowed-out pumpkin shells are used for boats, powered by canoe paddles.