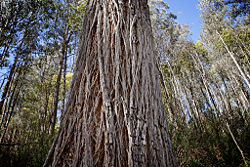 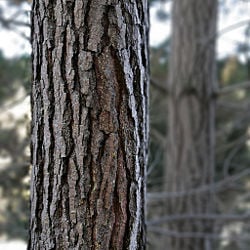 Bark is the outermost layer of stems and roots of woody plants, such as trees and shrubs. The tissues included depend on how broadly the term is defined and the age of the plant (whether considering primary tissues or secondary growth). Broadly defined, bark refers to all those tissues outside the vascular cambium, or all tissues from the living phloem outward. However, in popular use, the term bark is often used in reference to only the cork or only to the periderm (cork, cork cambium, and phellederm) in plants with secondary growth. Some definitions include the vascular cambium in the definition.

The outer bark of dead cork cells gives the pattern seen in trees, adding to the diversity in nature and enhancing human aesthetic pleasure. But bark also provides many other values to human beings. Bark is the source of the anti-malarial drug quinine, the commonly used salicylic acid (aspirin), and numerous cancer drugs, as well as adding a wide variety of other benefits, such as cork, teas, cinnamon, fiber, tannic acid, and so forth.

Along with the xylem, the phloem is one of the two tissues inside a plant that are involved with fluid transport. The phloem transports organic molecules (particularly sugars) to wherever they are needed. Xylem is the primary water-conducting tissue. Xylem is not part of the bark, whereas phloem is included.

Cork, sometimes confused with bark in colloquial speech, is the outermost layer of a woody stem, derived from the cork cambium. Cork is an external, secondary tissue impermeable to water and gases. It serves as protection against damage, parasites, and diseases, as well as dehydration and extreme temperatures. Some cork is substantially thicker, providing further insulation and giving the bark a characteristic structure; in some cases thick enough to be harvestable as cork product without killing the tree.

Epidermis is the outer, single-layered group of cells that covers the leaf and young tissues of a vascular plant, including primary tissues of stems and roots. The epidermis serves several functions—protection against water loss, regulation of gas exchange, secretion of metabolic compounds, and (especially in roots) absorption of water and mineral nutrients.

In young stems of woody plants (trees, shrubs, and some perennial vines), the bark is made up of the following tissues arranged from the outside surface to the inside:

In primary tissues, the bark of stems (broadly defined) includes the phloem, cortex, and epidermis, and the bark of roots would be the cortex and epidermis. The cork cambium subsequently is responsible for secondary growth that replaces the epidermis in roots and stems. 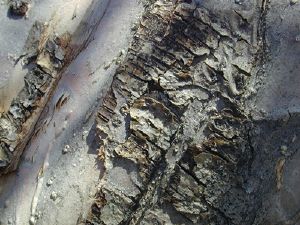 In roots with secondary growth, the cortex and epidermis may be sloughed off as cork is formed, and in these cases the bark includes the phloem, cork cambrium, cork, and phelloderm.

In old stems, the epidermal layer, cortex, and primary phloem become separated from the inner tissues by thicker formations of cork. Due to the thickening cork layer, these cells die because they do not receive water and nutrients. This dead layer is the rough corky bark that forms around tree trunks and other stems. In smaller stems and on typically non-woody plants, sometimes a secondary covering form called the periderm, which is made up of cork cambian, cork, and phelloderm. It replaces the dermal layer and acts as a covering much like the corky bark—it too is made up of mostly dead tissue. The skin on the potato is a periderm.

The bark of some trees is edible, and native American Indians used to feed on the inner bark of various trees, such as ceder, slippery elm, and white birch, when other sources of food were scarce. Diverse teas are produced from bark, such as using the inner bark of slippery elm (Ulmus rubra), and the bark from different species of trees historically has been used for such treatments as toothaches, fever, low blood pressure, asthma, inflammation, and so forth.

Many important medicinal products are obtained from bark. These include the alkaloid quinine, which is extracted from the root and trunk bark of Cinchona, native to the South American Andes (Telematics 2004). Quinine is an effective remedy against malaria, and indeed the plant was named after the Countess of Chinchon who was cured of malaria in 1623 using the bark, the Spanish having been introduced to its use in 1633 by the native Indians in Peru. Salicylic acid (aspirin) is derived from the bark of willow trees. Cancer drugs, among others, are also derived from barks, including treatments for colon, ovarian, lung, and breast cancer (Telematics 2004).

Bark is used for basketry making, clothing, and cloth (from beaten bark, principally in Pacific Islands, southeast Asia, parts of Africa and South America) (Telematics 2004). Among the commercial products made from bark are cork, cinnamon, fiber, roofing material, tannic acid (used in tanning, most notably from the bark of oak, Quercus robur), and antiseptics, like tannins. Historically, shelters, belts, headdresses, coffins, and ornaments were made with bark, and canoes made from bark have been in use for over 3,000 years (Telematics 2004). 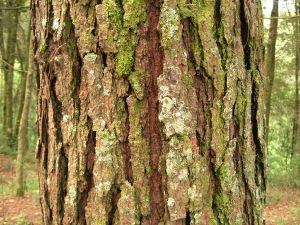 Bark of a Pine tree in Tecpan, Guatemala.

Retrieved from https://www.newworldencyclopedia.org/p/index.php?title=Bark&oldid=685037
Categories:
This page was last edited on 3 April 2008, at 18:09.
Content is available under Creative Commons Attribution/Share-Alike License; additional terms may apply. See Terms of Use for details.