Inflammation is a localized protective response of a body's living tissue to injury, infection, irritation, or allergy. Inflammation is characterized by the following quintet: Redness (rubor), heat (calor), swelling (tumor), pain (dolor), and dysfunction of the organs involved (functio laesa). The first four characteristics have been known since ancient times and are attributed to Roman encyclopedist Celsus (25 B.C.E.—50); functio laesa was added to the definition of inflammation by Rudolf Virchow, in 1858.

Inflammation is part of the innate immune system, that is, the immediate "first-line" of defense to illness or pathogens, which is also known as a nonspecific defense. This is as opposed to the adaptive (acquired) immunity involving antibodies or T-cells that specifically target particular pathogens, but which takes time, usually days, to develop. Inflammation reveals a stunning complexity and harmony to the body, where such actions take place as blood vessels dilating upstream of an infection and constricting downstream, movement of fluid and white blood cells into the area, release of protein and peptide signaling compounds, and so forth.

Inflammation is usually indicated by using the English suffix "-itis," such as appendicitis, laryngitis, pancreatitis, hepatitis, and encephalitis for inflammation of the appendix, larynx, pancreas, liver, and brain, respectively.

Inflammation is not "healthy" nor "unhealthy" on its own. Inflammation helps fight disease or injury, such as by removing pathogens and debris, and walling off infection from spreading. However, it comes at the cost of suspending the body's normal immune and catabolic processes. In the short term, this is often a valid trade-off, but in the long term it causes progressive damage. 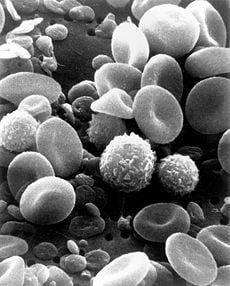 The cellular component involves the movement of white blood cells, or leukocytes, from blood vessels into the inflamed tissue. The white blood cells take on an important role in inflammation; they extravasate (filter out) from the capillaries into tissue, and act as phagocytes, picking up bacteria and cellular debris. They may also aid by walling off an infection and preventing its spread.

The exudative component of inflammation involves the movement of fluid, usually containing many important proteins such as fibrin and immunoglobulins (antibodies). (An exudate is any fluid that filters from the circulatory system into lesions or areas of inflammation.) Blood vessels are dilated upstream of an infection (causing redness and heat) and constricted downstream, while capillary permeability to the affected tissue is increased, resulting in a net movement of blood plasma into the tissue, giving rise to edema or swelling. The swelling distends the tissues, compresses nerve endings, and thus causes pain. Inflammation can be recognized by nitric oxide.

If inflammation of the affected site persists, released cytokines IL-1 and TNF will activate endothelial cells to up-regulate receptors VCAM-1, ICAM-1, E-selectin, and L-selectin for various immune cells. (Cytokines are a group of proteins and peptides that are used in organisms as signaling compounds, allowing one cell to communicate with another.) Receptor upregulation increases extravasation of neutrophils, monocytes, activated T-helper, and T-cytotoxic, and memory T, and B cells to the infected site.

Neutrophils are characteristic of inflammation in the early stages. They are the first cells to appear in an infected area, and any section of recently inflamed (within a couple of days or so) tissue viewed under a microscope will appear packed with them. They are easily identified by their multilobed nuclei and granular cytoplasm and perform many important functions, including phagocytosis and the release of extracellular chemical messengers. Neutrophils only live for a couple days in these interstitial areas, so if the inflammation persists for a longer duration then they are gradually replaced by longer lived monocytes.

The outcome in a particular circumstance will be determined by the tissue in which the injury has occurred and the injurious agent that is causing it.

There are four possible results to inflammation:

When inflammation overwhelms the whole organism, systemic inflammatory response syndrome (SIRS) is diagnosed. When it is due to infection, the term sepsis is applied. Vasodilation (where blood vessels in the body become wider, reducing blood pressure) and organ dysfunction are serious problems that may lead to septic shock and death.

With the discovery of interleukins (group of cytokines, secreted signaling molecules), another concept of systemic inflammation developed. Although the processes involved are identical, this form of inflammation is not confined to a particular tissue but involves the endothelium (lining of blood vessels) and many other organ systems. High levels of several inflammation-related markers such as IL-6, IL-8, and TNF-α are associated with obesity (Bastard et al. 2000, Mohamed-Ali 2001). These levels are reduced in association with increased levels of anti-inflammatory molecules within four weeks after patients begin a very low calorie diet (Clement 2004). The role of systemic inflammation as a cause and/or result of insulin resistance and atherosclerosis is the subject of intense research. It has little direct bearing on clinical care.

Inflammation is usually indicated by adding the suffix "-itis," as shown below. However, some conditions such as asthma and pneumonia do not follow this convention.

Retrieved from https://www.newworldencyclopedia.org/p/index.php?title=Inflammation&oldid=980321
Categories:
This page was last edited on 15 April 2014, at 15:07.
Content is available under Creative Commons Attribution/Share-Alike License; additional terms may apply. See Terms of Use for details.