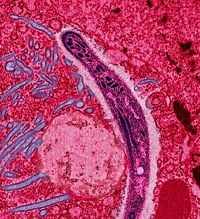 This false-colored electron micrograph shows a malaria sporozoite migrating through the midgut epithelia.

Infection is an invasion, multiplication, and detrimental colonization of a host organism's body tissues by various parasitic organisms or viruses. These harmful biological agents (infectious agents) may include bacteria, fungi, protozoans, helminths (parasitic worms), and viruses. While infection often is described as the "entering inside" of the body by a biological agent, the term also includes cases where the agent attaches itself to the body (Knight and Schlager 2002). Infection differs from the presence of harmless or helpful organisms present in the body in that the infectious agents are pathogens that are detrimental, whether directly damaging cells, causing allergic reactions, or releasing toxic substances. The infection may be subclinical—whereby the infection is not apparent, or is asymptomatic, or may follow such a mild course that it does not alert the patient enough to consult with a physician—or the infection may progress to a state of tissue injury and overt disease.

The human body under normal circumstances has a remarkable ability to protect against infection. There are physical barriers and biotic barriers to keep invaders out, including some microorganisms found on human skin that can inhibit the growth of many pathogens, and the human immune system can deal with innumerable infectious agents. As human beings have learned more about pathogens, they have learned how to prevent infections, such as practicing good hygiene, cooking food thoroughly, and not engaging in intravenous drug use or risky sexual behaviors. Likewise, human beings have developed vaccines for many diseases and antibiotics to help the immune system repel infectious agents.

The human body is associated with billions of harmless or helpful microorganisms, both covering the body and inside the body (Blakemore and Jennett 2001). However, in the case of an infection, pathogens gain access to the body and multiply and cause harm. A symbiosis between parasite and host, whereby the relationship is beneficial for the former but detrimental to the latter, is characterized as parasitism. Infections are cause by parasitic agents.

In an infection, the infecting organism seeks to utilize the host's resources to multiply. The infecting organism, or pathogen, interferes with the normal functioning of the host and can lead to chronic wounds, gangrene, loss of an infected limb, and even death. Colloquially, a pathogen is usually considered a microscopic organism though the definition is broader, including worms, fungi, viruses, prions, and viroids. The host's immune system strives to overcome the infection, including a response such as inflammation.

Infection is not simply the presence of living infectious agents on clothing or exterior surfaces of the body; this is rather contamination of such surfaces and articles (WSDH 2008).

All multicellular organisms are colonized to some degree by extrinsic organisms, and the vast majority of these exist in either a mutualistic or commensal relationship with the host. An example of the former would be the anaerobic bacteria species that colonize the mammalian colon, and an example of the latter would be the various species of staphylococcus that exist on human skin. Neither of these colonizations would be considered infections. The difference between an infection and a colonization is often only a matter of circumstance. Organisms which are non-pathogenic can become pathogenic under the right conditions, and even the most virulent organism requires certain circumstances to cause a compromising infection. Some colonizing bacteria, such as Corynebacteria sp. and viridans streptococci, prevent the adhesion and colonization of pathogenic bacteria and thus have a symbiotic relationship with the host, preventing infection, and speeding wound healing.

The variables involved in the outcome of a host becoming inoculated by a pathogen and the ultimate outcome include:

As an example, the staphylococcus species present on skin remain harmless on the skin, but, when present in a normally sterile space, such as in the capsule of a joint or the peritoneum, will multiply without resistance and create a huge burden on the host.

An occult infection is medical terminology for a "hidden" infection, that is, one which presents no symptoms. Dr. Fran Giampietro discovered this type, and coined the term "occult infection" in the late 1930s.

An infectious disease is a clinically evident disease resulting from the presence of pathogenic microbial agents, including pathogenic viruses, pathogenic bacteria, fungi, protozoa, multicellular parasites, and aberrant proteins known as prions. These pathogens are able to cause disease in animals and/or plants.

Infectious pathologies are usually qualified as contagious diseases (also called communicable diseases) due to their potentiality of transmission from one person or species to another (Dorlands 2007). Transmission of an infectious disease may occur through one or more of diverse pathways including physical contact with infected individuals. These infecting agents may also be transmitted through liquids, food, body fluids, contaminated objects, airborne inhalation, or through vector-borne spread (McGraw 2005).

The term infectivity describes the ability of an organism to enter, survive, and multiply in the host, while the infectiousness of a disease indicates the comparative ease with which the disease is transmitted to other hosts (WSDH 2008). An infection however, is not synonymous with an infectious disease, as an infection may not cause important clinical symptoms or impair host function (McGraw 2005; WSDH 2008).

Infection control is the procedures and policies that are employed to minimize the risk of spreading infections, such as in hospitals and health care facilities. Infectious diseases can be spread by such means as human-to-human contract, animal-to-human contact, airborne transmission, a common vehicle such as food or water, or contact with an infected surface (Jones 2002). About five percent of all hospital patients in the United States contract infections while in hospitals (nosocomical infections) (Jones 2002).

Infection control include such common precautions as avoiding infections by vaccinations, washing of hands, cooking of food thoroughly, avoiding insects that may transmit pathogens, avoiding intravenous drug use, and unprotected sex (Jones 2002). One can use antibiotics to control bacterial infections, having heath care workers wear gloves, isolation of patients iwth transmittable infectious disease, and decontamination of surfaces (Jones 2002).

A developing problem is known as antibiotic resistance, which is when bacteria develop a resistance to an antibiotic over time.