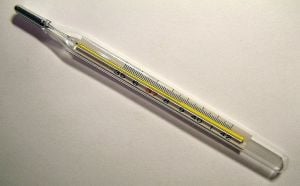 An analogue medical thermometer showing the temperature of 38.7 °C

Fever, also known as pyrexia or a febrile response, is a temporary elevation in the core body temperature of warm-blooded animals to levels that are above the normal range as a result of abnormal functioning of the thermoregulatory mechanisms. For example, the common oral measurement of normal human body temperature is 36.8±0.7°C or 98.6±1.3°F. An oral temperature at or above 37.5°C (99.5°F) is commonly considered a fever if resulting from such causes as a viral or bacterial infection, an allergic reaction, drugs, damage to the hypothalamus, and so forth. Fever is a frequent medical symptom.

Technically, fever is most accurately characterized as a temporary elevation in the body’s thermoregulatory set-point, usually by about 1-2°C. That is, the body's "thermostat" resets at a higher than normal temperature. Fever differs from hyperthermia, which is an increase in body temperature over the body’s thermoregulatory set-point (due to excessive heat production or insufficient thermoregulation, or both). Carl Wunderlich discovered that fever is not a disease, but a symptom of disease.

Fever can be uncomfortable for the patient and be accompanied by fatigue, nausea, chills, sweating, and so forth. At times, particularly when occurring in the very young or elderly, it can be life threatening. However, fever generally is a useful response of the body. It helps to reveal an underlying condition that may need treatment, and the fever itself may be helpful in terms of speeding up various immunological reactions. Some physicians believe that since a fever helps the immune system fight infection, it usually should be allowed to run its course, although various treatments, including anti-pyretic drugs, may be taken if the patient is uncomfortable or the condition is dangerous (Longe 2006). However, in general, the key treatment for a fever is to address the underlying causes.

Fever is a rather remarkable response of the body. It is not a passive response to the body being overwhelmed, but rather involves complex and coordinated enzymatic and hormonal interactions to set the thermostat at a higher level. This results in a multitude of responses of the body to a condition, such as changes in metabolic rate and blood flow, shivering, and sweating. When the underlying condition is resolved, homeostasis at the normal level returns. The body temperature of a human fluctuates around an average of about 98.6°F, or about 37°C. It may be 97°F in the morning and as high as 99.3°F in the afternoon, but is still considered to be normal (Longe 2005a). The body maintains homeostasis within this range by regulating the heat produced by metabolism with the heat lost from the body, a process that is controlled by a "thermostat" located in the hypothalamus within the brain (Longe 2006). If the nervous system relays information that the temperature of the body is high, then the body may do such actions as increasing the flow of blood from the body's core to the surface, slowing down the metabolic rate, and inducing sweating to dissipate the heat through evaporation (Longe 2006). If the temperature is low, then the body may react by shivering to produce heat, speeding up the metabolic rate, or decreasing the flow of blood from the body's core.

A fever occurs when the thermostat resets at a higher temperature (Longe 2006). The elevation in thermoregulatory set-point means that the previous "normal body temperature" is considered hypothermic, and effector mechanisms kick in. The person who is developing the fever has a cold sensation, and an increase in heart rate, muscle tone, and shivering attempt to counteract the perceived hypothermia, thereby reaching the new thermoregulatory set-point. The chills one experiences when one first has a fever results from the flow of blood from the extremities to the body's core, leaving the extremities cold; the shivering and chills stop when the higher temperature is reached (Longe 2006).

A fever is commonly caused by a bacterial or viral infection, such as the influenza, but may also be caused by damage to the hypothalamus, drugs, such cancers as leukemia and lymphoma, an [[allergy}allergic reaction]], and so forth. When the infection has been defeated by the immune system or anti-pyretic drugs such as aspirin or acteaminophen are taken, the thermostat resets to normal and the body's cooling mechanisms, such as sweating, switch on (Longe 2006).

When a patient has or is suspected of having a fever, that person's body temperature is measured using a thermometer. At a first glance, fever is present in a human if:

However, there are many variations in normal body temperature, and this needs to be considered when measuring fever. Body temperature normally fluctuates over the day, with the lowest levels at 4 a.m. and the highest at 6 p.m. Therefore, an oral temperature of 37.5°C would strictly be a fever in the morning, but not in the afternoon. Normal body temperature may differ as much as 0.4°C (0.7°F) between individuals. In women, temperature differs at various points in the menstrual cycle, and this can be used for family planning (although it is only one of the variables of temperature). Temperature is increased after meals, and psychological factors (like a first day in the hospital) also influence body temperature.

Children develop higher temperatures with activities like playing, but this is not fever because their set-point is normal. Elderly patients may have a decreased ability to generate body heat during a fever, so even a low-grade fever can have serious underlying causes in geriatrics.

Temperature is ideally always measured the same moment of the day, in the same way, after the same amount of activity.

Exogenous pyrogens. One model for the mechanism of fever caused by exogenous pyrogens includes lipopolysaccharide (LPS), which is a cell wall component of gram-negative bacteria. An immunological protein called Lipopolysaccharide-Binding Protein (LBP) binds to LPS. The LBP-LPS complex then binds to the CD14 receptor of a nearby macrophage. This binding results in the synthesis and release of various endogenous cytokine factors, such as interleukin 1 (IL-1), interleukin 6 (IL-6), and the tumor necrosis factor-alpha. In other words, exogenous factors cause release of endogenous factors, which, in turn, activate the arachidonic acid pathway.

PGE2 release comes from the arachidonic acid pathway. This pathway (as it relates to fever), is mediated by the enzymes phospholipase A2 (PLA2), cyclooxygenase-2 (COX-2), and prostaglandin E2 synthase. These enzymes ultimately mediate the synthesis and release of PGE2.

PGE2 is the ultimate mediator of the febrile response. The set-point temperature of the body will remain elevated until PGE2 is no longer present. PGE2 acts near the ventromedial preoptic area (VMPO) of the anterior hypothalamus and the parvocellular portion of the periventricular nucleus (PVN), where the thermal properties of fever emerge. It is presumed that the elevation in thermoregulatory set-point is mediated by the VMPO, whereas the neuroendocrine effects of fever are mediated by the PVN, pituitary gland, and various endocrine organs.

The brain ultimately orchestrates heat effector mechanisms. These may be

Pyrexia (fever) can be classed as

The last is clearly a medical emergency because it approaches the upper limit compatible with human life.

Most of the time, fever types can not be used to find the underlying cause. However, there are specific fever patterns that may occasionally hint at the diagnosis:

Febricula is a mild fever of short duration, of indefinite origin, and without any distinctive pathology.

Fever is a common symptom of many medical conditions:

Persistent fever, which cannot be explained after repeated routine clinical inquiries, is described obviously, as a fever of unknown origin.

There are arguments for and against the usefulness of fever, and the issue is controversial (Schaffner 2006; Soszynski 2003). There are studies using warm-blooded vertebrates (Su et al. 2005) and humans (Schulman et al. 2005), with some suggesting that they recover more rapidly from infections or critical illness due to fever.

Theoretically, fever has been conserved during evolution because of its advantage for host defense (Schaffner 2006). There are certainly some important immunological reactions that are sped up by temperature, and some pathogens with strict temperature preferences could be hindered (Fischler and Reinhart 1997). The overall conclusion seems to be that both aggressive treatment of fever (Schulman et al. 2005) and too little fever control (Schaffner 2006) can be detrimental. This depends on the clinical situation, so careful assessment is needed.

Fevers may be useful to some extent since they allow the body to reach high temperatures. This causes an unbearable environment for some pathogens. White blood cells also rapidly proliferate due to the suitable environment and can also help fight off the harmful pathogens and microbes that invaded the body.

Fever should not necessarily be treated. Fever is an important signal that there is something wrong in the body, and it can be used for follow-up. Moreover, not all fevers are of infectious origin.

In some cases, emergency treatment is called for in the case of fever. These cases include a newborn child (three months or younger) with a temperature over 38°C (100.5°F), an infant or child with a temperature over 39.4°C (103°F), or a fever accompanied with mental confusion, severe swelling of the throat, severe headache, or neck stiffness (Longe 2005b). A very high fever in a small child may trigger seizures, and a fever accompanied by the above symptoms may signal the presence of a serious illness, such as meningitis (Longe 2006).

Addressing of the underlying causes is the most effective treatment of a fever, such as the use of antibiotics to deal with bacterial infections (Longe 2006).

Even when treatment is not indicated, however, febrile patients are generally advised to keep themselves adequately hydrated, as the dehydration produced by a mild fever can be more dangerous than the fever itself. Water is generally used for this purpose, but there is always a small risk of hyponatremia if the patient drinks too much water. For this reason, some patients drink sports drinks or products designed specifically for this purpose.

Most people take medication against fever because the symptoms cause discomfort. Fever increases heart rate and metabolism, thus potentially putting an additional strain on elderly patients, patients with heart disease, and so forth. This may even cause delirium. Therefore, potential benefits must be weighed against risks in these patients. In any case, fever must be brought under control in instances when fever escalates to hyperpyrexia and tissue damage is imminent.

Treatment of fever should be based primarily on lowering the setpoint, but facilitating heat loss may also contribute. The former is accomplished with antipyretics. Wet cloth or pads are also used for treatment, and applied to the forehead. Heat loss may be an effect of (possibly a combination of) heat conduction, convection, radiation, or evaporation (sweating, perspiration). This may be particularly important in babies, where drugs should be avoided. However, if water that is too cold is used, it induces vasoconstriction and prevents adequate heat loss.

Aspirin should not be given to a child or adolescent (nineteen years of age or younger) with a fever because this drug has been linked to Reye's syndrome, which can cause brain or liver damage, and even death (Longe 2006).

There also are alternative treatments that are sometimes followed, such as biofeedback, holistic healing, herbal medication, and relaxation therapy (Longe 2005b).