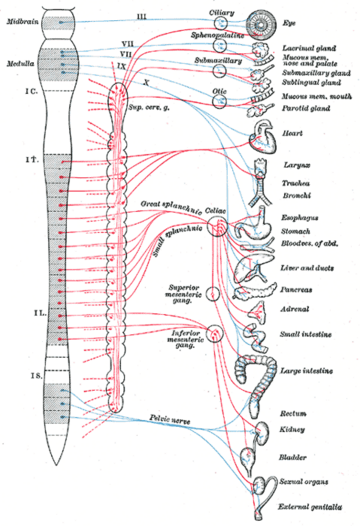 The autonomic nervous system (ANS) is that part of the peripheral nervous system that largely acts independent of conscious control (involuntarily) and consists of nerves in cardiac muscle, smooth muscle, and exocrine and endocrine glands. It is responsible for maintenance functions (metabolism, cardiovascular activity, temperature regulation, digestion) that have a reputation for being outside of conscious control. The other main subdivision of the peripheral nervous system, the somatic nervous system, consists of cranial and spinal nerves that innervate skeletal muscle tissue and are more under voluntary control (Anissimov 2006; Towle 1989).

A third subsystem, the enteric nervous system, is classified as a division of the autonomic nervous system as well. This subsystem has nerves around the intestines, pancreas, and gall bladder.

The autonomic nervous system is typically presented as that portion of the peripheral nervous system that is independent of conscious control, acting involuntarily and subconsciously (reflexively), and innervating heart muscle, endocrine glands, exocrine glands, and smooth muscle (Chamberlin and Narins 2005). In contrast, the somatic nervous system innervates skeletal muscle tissue, rather than smooth, cardiac, or glandular tissue.

In general, the autonomic nervous system controls homeostasis, that is the constancy of the content of tissues in gases, ions, and nutrients. It does so mostly by controlling cardiovascular, digestive, and respiratory functions, but also salivation, perspiration, diameter of the pupils, micturition (the discharge of urine), and erection. While many of the activities of the ANS are involuntary, breathing, for example, can be in part consciously controlled. Indeed, although breathing is a purely homeostatic function in aquatic vertebrates, in land vertebrates it accomplishes much more than oxygenating the blood: It is essential to sniff prey or a flower, to blow out a candle, to talk or sing. This example, among others, illustrates that the so-called “autonomic nervous system” is not truly autonomous. It is anatomically and functionally linked to the rest of the nervous system and a strict delineation is impossible.

The ANS is nevertheless a classical term, still widely used throughout the scientific and medical community. Its most useful definition could be: The sensory and motor neurons that innervate the viscera. These neurons form reflex arcs that pass through the lower brainstem or medulla oblongata. This explains that when the central nervous system (CNS) is damaged experimentally or by accident above that level, a vegetative life is still possible, whereby cardiovascular, digestive, and respiratory functions are adequately regulated.

Although commonly the ANS is looked at, and even defined, as if limited to motor fibers and excluding sensory fibers, a more comprehensive definition is that the reflex arcs of the ANS comprises both a sensory (or afferent) arm, and a motor (or efferent, or effector) arm.

The sensory arm is made of “primary visceral sensory neurons” found in the peripheral nervous system (PNS) in “cranial sensory ganglia:" the geniculate, petrosal, and nodose ganglia, appended respectively to cranial nerves VII, IX, and X. These sensory neurons monitor the levels of carbon dioxide, oxygen, and sugar in the blood; arterial pressure; and the chemical composition of the stomach and gut content. They also convey the sense of taste, a conscious perception.

Blood oxygen and carbon dioxide are, in fact, directly sensed by the carotid body, a small collection of chemosensors at the bifurcation of the carotid artery, innervated by the petrosal (IXth) ganglion.

Primary sensory neurons project (synapse) onto “second order” or relay visceral sensory neurons located in the medulla oblongata, forming the nucleus of the solitary tract (nTS), which integrates all visceral information. The nTS also receives input from a nearby chemosensory center, the area postrema, which detects toxins in the blood, and the cerebrospinal fluid. It is essential for chemically induced vomiting and conditional taste aversion (the memory that ensures that an animal that has been poisoned by a food never touches it again).

All this visceral sensory information constantly, and unconsciously, modulates the activity of the motor neurons of the ANS.

Motor neurons of the ANS are also located in ganglia of the PNS, called “autonomic ganglia.” They belong to three categories with different effects on their target organs: Sympathetic, parasympathetic, and enteric.

Sympathetic ganglia are located in two sympathetic chains close to the spinal cord: The prevertebral and pre-aortic chains. Parasympathetic ganglia, in contrast, are located in close proximity to the target organ: The submandibular ganglion close to salivary glands, paracardiac ganglia close to the heart, and so forth. Enteric ganglia, which, as the name implies, innervate the digestive tube, are located inside its walls and collectively contain as many neurons as the entire spinal cord, including local sensory neurons, motor neurons, and interneurons. It is the only truly autonomous part of the ANS and the digestive tube can function surprisingly well even in isolation. For that reason, the enteric nervous system has been called “the second brain.”

The feedback from the sensory to the motor arm of visceral reflex pathways is provided by direct or indirect connections between the nucleus of the solitary tract and visceral motoneurons.

At the effector organs, sympathetic ganglionic neurons release noradrenaline (norepinephrine) to act on adrenergic receptors, with the exception of the sweat glands and the adrenal medulla:

In the parasympathetic system, ganglionic neurons use acetylcholine as a neurotransmitter, to stimulate muscarinic receptors.

The following table reviews the actions of these neurotransmitters as a function of their receptors.